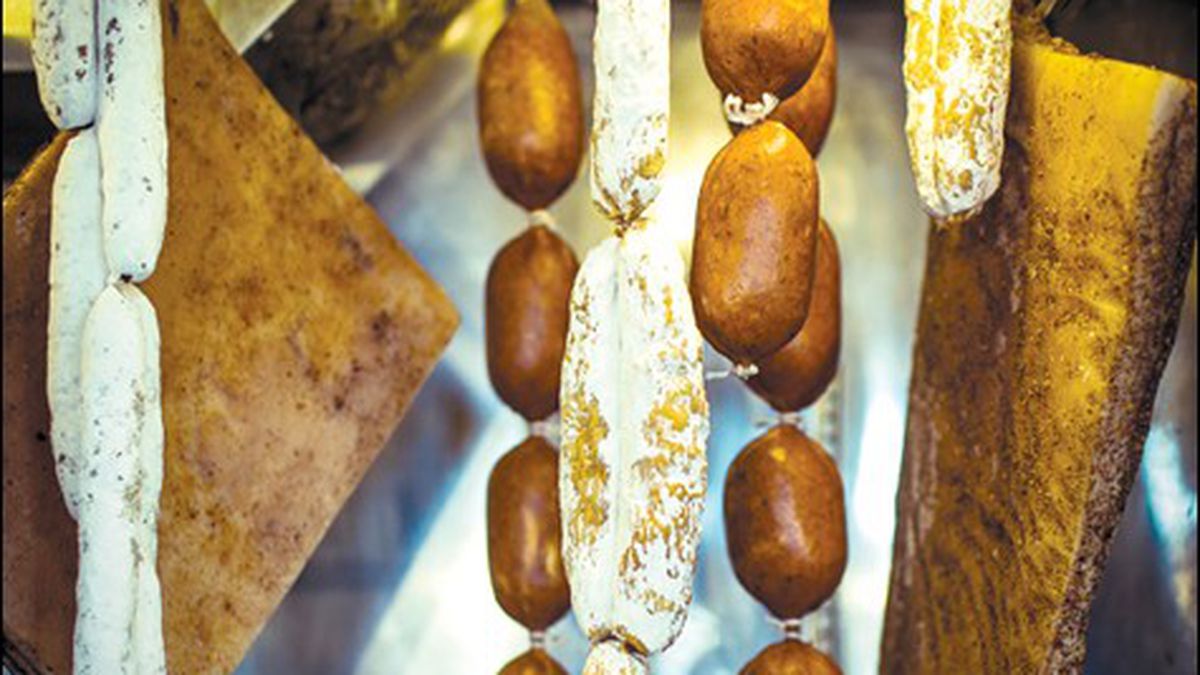 Three Oakland restaurants find the time and space to make their own charcuterie.

Can Chefs Do It All?” was the headline of a recent San Francisco magazine think piece that poked gentle fun at an unnamed Mission District chef whose DIY ambitions include brewing his own vinegar, raising goats on his restaurant’s rooftop, and possibly slaughtering said goats himself as well. Of course, the real question is whether chefs ought to even attempt to “do it all.” Isn’t there always a cost-benefit curve — a point at which the trouble and expense it takes a restaurant to produce something in-house just doesn’t seem worth it?

Given the notoriously thin profit margins of the restaurant biz, making charcuterie and salumi would seem to fall under the category of why-bother-to-do-it-yourself. You have to have big hunks of meat hanging everywhere, covered in (perfectly safe) mold, in various stages of curing/drying/aging. You have to maintain a storage space that’s perfectly controlled for temperature and humidity. You have to get up to speed on the basics of microbiology and fermentation so you don’t, God forbid, make people sick.

It seems like an awful lot of trouble, yet in the past few years, more and more Bay Area restaurants are dabbling in these dark arts, going beyond a simple pâté here and there to the point that chefs are now breaking down whole hogs and making 24-month aged prosciuttos. And it isn’t just high-end restaurants, with their legions of prep chefs, but also humble sandwich shops and neighborhood watering holes.

So the question remains: Why bother when there are specialized charcuterie makers, even locally, that already put out great products?

For Bob Cina, the executive chef at District, it’s a point of pride to make as much as what he serves in house as possible. The trendy Old Oakland wine bar (an offshoot of the San Francisco original) opened in April with a heavily French-influenced menu on which charcuterie plays a prominent role — a rotating list of about a dozen different items at any given time: spreadable pork-and-duck rillettes, beef jerky, Cajun-style Tasso ham. You can order à la carte — one of the better deals on the menu, at $3 to $4 a pop — or splurge on the $24 “Grand Tasting Plate,” which comes with a little of everything.

All of it is prepped and, when appropriate, aged in District’s decent-size (but by no means enormous) kitchen. Ultimately, Cina said, it’s a matter of quality control: “I know the pork I’m using, and I know that it’s high quality. I’m sure a lot of places do the right thing, but when you’re doing it yourself, you know.”

Fun because there’s room for experimentation that isn’t possible, of course, when you’re just picking out a pre-made product. Cina explained that he used to buy a mole salami — a fusion of the Mexican and Italian culinary traditions. When he started making his own, he played around with using different kinds of chiles. He added a touch of cinnamon. He started incorporating whole cacao nibs instead of using ground cacao exclusively. In short, he was able to customize the salami to his own taste.

Cina acknowledged that the process of making even the most basic pâtés or salamis can be challenging — you have to have the right “touch” to keep the pâté from becoming too mushy, and know exactly how long a beef bresaola needs to cure and hang so it has the ideal texture and an appropriate level of saltiness.

When everything comes together, though, the effort is worth it. Take Cina’s signature truffled chicken-liver mousse, a rich, buttery spread that balances the organ-y meatiness of pork livers, the earthiness of truffles, and the boozy sweetness of a port gelée topping.

“Something like that has obviously been being made for centuries, probably, but it’s a tricky thing to get down,” Cina explained.

Perhaps more to the point, it’s something customers at District can’t buy anywhere else.

Of course, we can’t talk about charcuterie in the Bay Area without mentioning the fact that there’s an entire restaurant devoted to the stuff: Piedmont Avenue’s Adesso — a veritable temple of smoked and cured pork.

Chef-owner Jon Smulewitz recalls making dried sausages with his Sicilian grandmother when he was a kid growing up in New Jersey. But he got his real sausage education during the five years he spent working at Oliveto under Paul Bertolli, a charcuterie guru who later founded Fra’ Mani, the artisan salumi producer. Back when Smulewitz started at Oliveto — in 1998 or so — there weren’t more than a handful of restaurants in the United States that had extensive charcuterie programs, which was a big reason he applied for the gig. For him, there was almost something magical about learning how to properly cure and smoke different cuts of meat.

“You grew up eating it, and it’s such a mystery to you,” he explained. “When you make it the first time, you actually can’t believe that you made it.”

Smulewitz said that when he opened his first restaurant, Dopo, he included on the menu a small selection of salumi — the term favored by folks who follow the Italian tradition, referring primarily to cured pork products like prosciuttos and salamis. (The broader, French-derived “charcuterie” can refer to a wide range of prepared meat products, including pâtés and terrines.)

But it wasn’t until he opened Adesso in 2009 that Smulewitz really started getting serious about the craft. He hired Chad Arnold, a line cook at Dopo, to be his full-time salumi chef. He went from going through one whole hog a month to one every week.

The centerpiece of the restaurant itself is a gleaming, temperature-controlled glass display case, where customers can see various cuts of pork, trussed up and hanging from hooks or drying on racks. Besides a small selection of salads and cooked appetizers, charcuterie and salumi are literally the only things on the menu.

Moreover, Adesso is a restaurant that’s serious about salumi. Order one of the charcuterie sampler plates (which start at about $17) and it comes presented in the most minimalist way you can imagine: literally just slices of meat lined up on a platter, with some bread on the side — the same way traditional salumi bars in Italy serve it, Smulewitz explained. Nothing competes for your attention.

And make no mistake: This is salumi worthy of your full attention. After all, if Adesso is going to age its prosciutto for anywhere from 18 to 24 months — an anomalous approach for restaurants, which usually try to move their inventory as quickly as possible — so as to achieve just the right texture and hint of sweetness, it behooves you to try to pick up on all the nuances when you’re eating it.

Each bite might yield a revelation: The speck, for instance, is cured pork leg that’s cold-smoked for two days. The final product, sliced thin and almost translucent, is incredibly lush — reminiscent of the highest-quality smoked salmon in both taste and texture.

Smulewitz explained that Arnold fine-tunes his recipes to highlight individual ingredients — so that you can really taste the oregano in a particular ham or the fennel seed in a certain salami. But overall, they aren’t reinventing the wheel. However fashionable charcuterie might be right now, the restaurant is very much staying true to centuries of Italian tradition.

Lev Delaney, chef and co-owner of Chop Bar — another Oakland restaurant with an impressive charcuterie program — echoes the sentiment. Without overstating the obvious, charcuterie isn’t anything new, and its practitioners, however creative they might be, aren’t generally delving into molecular gastronomy.

“We’re not using any technology,” Delaney said. “We’re pretty much doing it the old-fashioned way.”

In fact, the very reason that Chop Bar serves charcuterie harks back to the invention of sausage- and salami-making as a way to reduce wastefulness and to preserve meat in the absence of refrigeration. Delaney explained that a year and a half after the restaurant opened, he and his partners realized that the best way to serve high-quality meat while keeping their prices down was to buy whole animals and to break them down themselves. So the restaurant acquired a separate commissary kitchen facility where there was room to butcher whole lambs and pigs. At this point they’re going through a hog and a half every week.

To a large degree, then, expanding the restaurant’s charcuterie program was a financial necessity — a way to reduce waste. Delaney said Chop Bar pays about $3 a pound for a whole hog — a huge savings compared to paying, say, $12 a pound, to buy pâté from a local artisan vendor. But you only get that savings if you use the entire pig, and charcuterie by its very nature is designed to employ harder-to-use parts.

“You’ve got to monetize the whole thing: the skin, the bones, the fat,” Delaney said. “That’s what makes it possible for you to sell everything at a low price.”

Like many of the chefs now making their own charcuterie, Delaney is mostly self-taught, having picked up techniques from reading books and watching YouTube videos rather than doing a long apprenticeship. He noted that a big part of the field’s appeal comes from the fact that “it’s kind of a new world for cooks” — a chance to work with interesting microscopic processes that are completely different from everyday cooking.

The charcuterie plate at Chop Bar is beautiful, with a kind of rustic chic — it comes out on a wooden board that’s dotted with colorful pickled things (little whole carrots, radishes, and green beans), a pile of sauerkraut, and a smear of whole-grain mustard. Everything is made in-house, even if it doesn’t say so on the menu. Delaney, for his part, repudiates the kind of self-seriousness he sees as being rampant at some of today’s restaurants.

He stressed that he wanted diners to enjoy themselves, not feel like they’re going to be quizzed on the food: “Chop Bar is not there for you to have a ‘flight’ of anything.” The idea, he said, wasn’t to show off how “awesome” the restaurant’s charcuterie is.

Yet the fact remains: Take a bite of Delaney’s decadent lardo (cured fatback), the richness of which is offset by a brush of sweet apricot gastrique. Try his smoked tenderloin, and appreciate the restrained salt level and the subtle smokiness.

All in all, it’s hard not to conclude that — when the end product is this good — all of the time and the labor and the specialized equipment that goes into a making one’s own charcuterie is ultimately worth it. And that is pretty awesome.