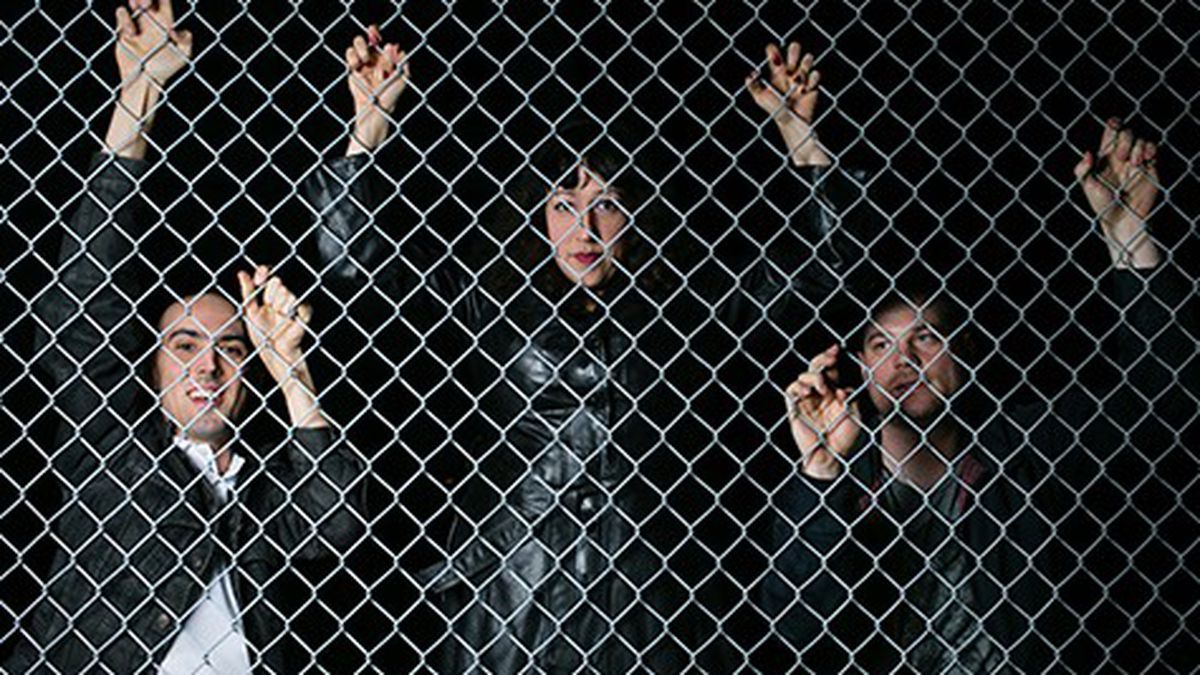 After several lineup switches, the members of celebrated Bay Area punk band Cold Beat find their groove as collaborators and evolve towards a more electronic sound.

On a recent Tuesday night, Kyle King and Jackson Blumgart of the shoegaze-y pop-punk trio Cold Beat tooled around with an array of drum machines, synthesizers, and samplers in their warehouse studio in Oakland’s San Antonio neighborhood. The bandmates connected their various pieces of equipment with a web of cables that spread across the floor as I chatted with Hannah Lew, Cold Beat’s bandleader. King started messing around with a clubby dance beat on one of his keyboards before stopping himself.

“This isn’t what our music sounds like, by the way,” he laughed, turning to me. Despite needing to rehearse for several upcoming shows, the members of Cold Beat had dedicated the night’s practice to experimenting with new material. The trio’s excitement to create something together was palpable.

The band, which Lew founded in 2011, has recently hit its collaborative stride. After several membership changes, including deciding to move forward without a live drummer, they have finally solidified their lineup. And while Lew started out as Cold Beat’s chief songwriter, on its last album, 2015’s Into the Air, she, King, and Blumgart began to develop a rapport as co-composers. (King has been playing with Lew since 2012 and Blumgart joined the band in 2014.).

Also telling of their newfound creative synergy: Lew used to do Cold Beat interviews alone, but throughout our conversation, she deferred certain questions to King and Blumgart, who gladly chimed in as they set up their gear. Over room-temperature beers from a twelve-pack on the studio floor, the trio traded bits of life experience and technical expertise, referencing inside jokes throughout.

Lew, a 35-year-old San Francisco native, is a longtime fixture in the Bay Area punk scene. She gained a cult following locally and nationally through her previous band, the punchier, more garage-y Grass Widow. Grass Widow released its debut in 2009 on the indie rock label Captured Tracks — which, at the time, also featured national acts such as Thee Oh Sees and The Fresh & Onlys on its roster.

While Grass Widow never got quite as big as its labelmates, its notoriety positioned Lew as an influential auteur in the Bay Area scene. In addition to amassing a considerable following as the bandleader of Cold Beat, she founded the label Crime on the Moon in 2012, through which she has put out the band’s releases digitally and on vinyl. Crime on the Moon has also released other standout, local projects, including Tropic Green’s excellent experimental electropop record, Golden Light (see my story “In Tune with the Moon,” 12/16/2015).

After changing drummers four times since the band’s first release in 2012, the members of Cold Beat decided to have King and Blumgart playing their beats live on a drum machine during performances instead. This new approach, the bandmates explained, allows them to retain the organic element of their stage shows while maintaining a consistent and more electronic sound.

Consistency between their recorded and live material was something the members of Cold Beat had previously struggled with, they admitted. Each time they changed percussionists, their live sound changed, too.

“If you’re constantly changing the drummer, it’s like you’re changing the heartbeat [of the music],” Blumgart said. “So if we are able to do that on our own, we can keep moving forward instead of working to get back to where we were every time.”

However, despite the fact that two different drummers played on Into the Air (including the Express’ former music editor, Sam Lefebvre), the record still retains its cohesiveness, largely thanks to the current trio’s masterful arrangements of electronic effects and punk instrumentation. “Cracks” is a particularly good example, with a pulsating bass line driving its unrelenting rhythm. As it builds intensity, sharp, wiry synths clash with shrill guitar riffs. The even rhythm section balances out these unbridled qualities, and Lew’s lo-fi vocals punctuate the bouts of dense playing.

“Clouds” is an electronic, instrumental interlude that demonstrates the band’s penchant for cultivating a big sound even when fewer musicians are involved. Wobbly synth lines undulate over the tapping of an 808 drum machine, with various tones — some smooth and glassy, others scratchy and brittle — creating a dynamic interplay of layers. The track segues into “Spirals,” another synth-driven song that transforms the tactile qualities of “Clouds” into a danceable rhythm with an Eighties, New Wave feel.

Though Cold Beat regularly plays alongside other Bay Area bands and participates in the tight-knit, local punk community, its experimentation with electronic elements makes the band difficult to classify, and its catchy yet category-resistant sound has lent it crossover appeal. Notably, it’s one of the few groups that have managed to remain in Oakland’s underground scene while garnering attention from national publications, such as Pitchfork, NPR, and Rolling Stone. But underground publications, such as Maximum Rocknroll, have also championed the group’s music. In fact, this week, Cold Beat is slated to perform at MRR‘s festival, Still Not Quiet on the Western Front.

Because of the punk scene’s DIY ethos and, in some cases, distaste for the mainstream media, many bands don’t expand their reach beyond the house show and underground venue circuit. Lew observed that this sort of thinking ultimately limits a band’s potential reach, adding that as she’s gotten older, she finds herself less concerned with being part of a scene and more interested in making art that speaks to people from a variety of backgrounds.

“I generally don’t really make music for the validation of my peers, necessarily, or for a small community. I want to make things that are available to anyone,” she said.

King added, “I know that the music that influences me was not made by people who look like me or necessarily think like me. … I think there’s a desire somewhere to reach out even further.”