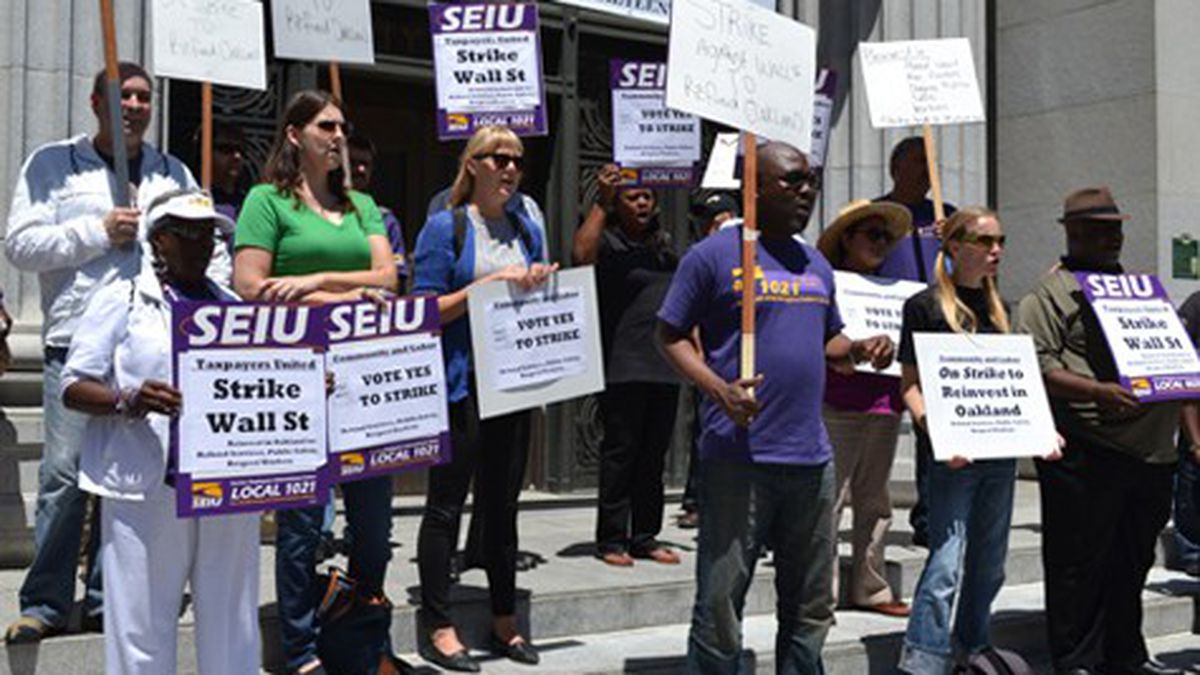 A new report alleges that big banks gouged Oakland taxpayers of nearly $500 million over the past sixteen years as the city has been forced to dramatically cut public services.

Oakland’s employee unions and the Alliance of Californians for Community Empowerment released a report last week contending that banks have “looted” the city of nearly half a billion dollars over the past sixteen years. The report focuses on five “predatory practices” that, according to the group Reinvest in Oakland, have “gouged” taxpayers for approximately $468 million, a sum roughly equivalent to Oakland’s general fund budget for an entire year.

“Our Oakland communities have been robbed blind by the banks and they need to pay back the money they took from the people of Oakland,” said Shirley Burnell, an Oakland resident and member of ACCE during a rally last week. Councilman Dan Kalb, who also spoke at the rally, called the practices of many financial companies unethical. Kalb supports renegotiating bad deals and seeking damages from any bank implicated in frauds that have harmed Oakland.

Over the past five years, dozens of investigations by bank regulators and attorneys general have been launched nationwide into the practices of the world’s largest banks. The probes have revealed numerous criminal conspiracies to steal billions from taxpayers around the globe, but local governments have yet to be repaid, even in cases where fraud has been proven beyond any doubt. In fact, some of the most toxic and fraudulent examples of bank wrongdoing are still affecting contracts and investments on Oakland’s books, constituting ongoing liabilities that reduce the city’s available funds by millions each year.

For example, according to the unions’ analysis, one bank fraud affecting the city — manipulation of the benchmark LIBOR interest rate — has extracted as much as $15 million from Oakland since 2008. That’s enough to fund Head Start programs in the city for ten years. While big banks booked these payments as profits, Oakland’s leaders have been reduced to debating by how much to cut programs — like Head Start — or whether to demand more pay concessions from city workers.

Deborah Santana, a member of the Oakland Coalition to Stop Goldman Sachs, said the new report supports the agenda her group has been pursuing with the city council. Last year, Santana and other community members convinced the council to bar Goldman Sachs from future city business due to what activists say is an unfair interest rate swap contract. “We did some independent investigation and gave results to city council so they had other information besides what the city administrator was giving them,” said Santana. “Now they have someone else looking at these various complex financial deals, and demystifying it for them, so this is very helpful.”

The Reinvest in Oakland report also singles out the city’s interest rate swap with Goldman Sachs as an example of “predatory” bank behavior. As the Express previously reported (see “Oakland’s Toxic Deal With Wall Street,” 2/15/2012), the interest rate swap with Goldman Sachs has cost the city millions. Federal policy that keeps benchmark lending rates artificially low has forced Oakland to pay several million of dollars a year to Goldman Sachs, and the bank has refused to renegotiate the agreement.

But the swap is made worse by the criminal conspiracy of the world’s largest banks to rig the LIBOR rate. The LIBOR fraud, possibly the largest financial crime in world history, is the subject of an ongoing investigation by US authorities, and several banks have already admitted wrongdoing and paid billions in fines. To date, however, no local government has recouped damages caused by the manipulation of LIBOR.

Worse still, the problem goes well beyond interest rate swaps. LIBOR is used to calculate the value of other investments held by the city. Oakland’s unions estimate that LIBOR rate rigging by Citibank, JP Morgan, and Bank of America may have cost Oakland taxpayers as much as $15 million since 2007, as the value of some of the city’s short-term financial holdings and pension investments that are linked to LIBOR have been devalued.

To drive home Citibank’s participation in this crime, a group of about fifty union members and community activists marched on, and briefly took over, the lobby of the Citibank branch in Oakland’s City Center last week.

City Attorney Barbara Parker’s office is tracking the LIBOR litigation, including lawsuits filed by East Bay MUD and the City of Richmond, but Oakland has yet to take any action of its own. “We’re outraged that the banks would potentially defraud residents and taxpayers of the city of Oakland,” Parker told the Express in March (see “Oakland Might Sue Banks Over Rate-Rigging Conspiracy,” 3/7).

Since then, a federal judge dismissed most of the charges against the banks. Amazingly, the judge characterized the banks’ actions as criminal, but found technical reasons for why the lawsuits could not proceed under federal antitrust laws. Activists are, nevertheless, pressing Oakland to take action under state antitrust laws and securities laws to seek justice. “Every day that no action is taken by the city on the LIBOR fraud could reduce how much the people of Oakland could potentially get back,” said Al Marshall, a city employee.

According to Reinvest in Oakland’s report, $308 million out of the total $468 million that Wall Street has allegedly taken unfairly from the city was lost in Oakland’s disastrous pension obligation bond gambit. The pension obligation bonds in question were issued in 1997 and 2001 to allow Oakland to make advanced contributions to the under-funded Police and Fire Retirement System pension.

Bankers at Paine Webber (now part of the Swiss bank UBS) and the Public Financial Management group (PFM), a San Francisco financial advisory firm, sold Oakland’s leaders on the pension bond scheme in the 1990s, claiming that the city would earn more on the bond proceeds invested in corporate stocks than it would have to pay in interest on the bonds. Morgan Stanley and PFM gave Oakland’s leaders the same advice in 2001 when the city approved the next issue of pension bonds. Oakland basically took out expensive loans to invest in corporate stocks at the height of two stock market bubbles. When the bubbles burst in 2001 and 2008, the city lost hundreds of millions of dollars.

The Reinvest in Oakland report explains that this situation actually got worse last year. “The Oakland-Alameda County Coliseum Authority (OACCA) suffered a $23 million loss because of its inability to renew a [letter of credit],” the report stated. “… [T]he Authority was unable to renew its letter of credit with the Bank of New York Mellon and the California State Teachers’ Retirement System (CalSTRS). Because of its inability to renew the LOC, the OACCA suffered a loss of $23 million.”

Ronald Sommer, a spokesman for Bank of New York Mellon, called the refinancing deal with the OACCA a “complex undertaking.”