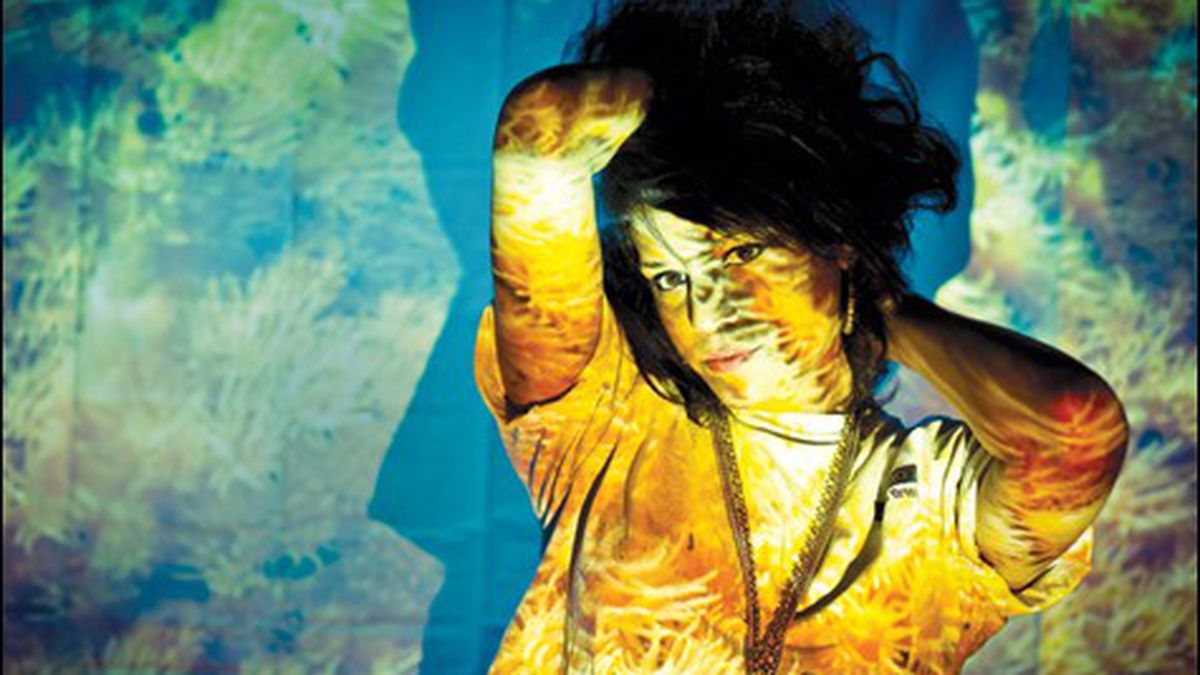 Sofía Córdova and Matt Kirkland both wear big glasses. They met at Bard College, work as photographers by day, have an MFA between them, and have been known to drop words like “performativity” into regular conversation. Talking to them — and through absolutely no effort of their own — you’re overcome by the distinct and unshakable knowledge that they are smarter than you by leaps and bounds. Their first album, recorded under the name ChuCha Santamaria Y Usted and released eponymously last year, was a high-minded concept piece about the Caribbean diaspora. All told, it could be the most insufferable thing you’ve ever heard, except it’s not, at all. In fact, it’s fantastic and vital and fully unpretentious and imminently catchy, what you might call “conscious disco” if that didn’t sound absolutely terrible (or sell the duo criminally short).

Besides, Kirkland and Córdova themselves are — rightfully, mercifully, wonderfully — wary of the artsy-intellectual thing, too. “We don’t want this to be pretentious art shit that you have to watch in a gallery,” Kirkland said, sitting in a downtown Oakland park last Friday. “Mostly, we want it to be something you can dance to.” And at the same time, when it comes to music, “political” can easily become code for boring or preachy — neither of which ChuCha is, or would ever want to be. “We’re trying to be fun and weird and interesting,” he continued. “Sure, it’s political, but politics is nuanced, and we have no interest in being didactic about it.”

In person, he and Córdova are friendly, funny, articulate, charmingly self-effacing, and totally not the kind of capital-S serious types you might imagine, given their résumés. For one thing, neither of them have very extensive musical training: Córdova, 26, logged several years in a children’s choir and a few playing flute in middle-school band; meanwhile, Kirkland, 29, grew up a music geek, half-seriously making beats with friends before realizing in his late twenties that he’d hit something of a dead end, that “I can’t offer anything new to the world of, like, white guy with a guitar makings songs about, you know, my life.” He grew up on the Upper West Side of Manhattan; Córdova’s originally from Puerto Rico. They met in their late teens at Bard, started dating soon after — they were married in August — and, following college and a couple years in New York City, moved to Oakland in 2008 so Córdova could pursue a master’s degree at the California College of the Arts. It was shortly thereafter that ChuCha Santamaria — they’ve now dropped the “Y Usted” — was born.

Even before Kirkland and Córdova explain ChuCha’s origins, there’s a palpable feeling of urgency and personal necessity to the project, of place and time and circumstance all converging to make two people who’d scarcely picked up an instrument in years do so and make a record, but the band makes more sense given its context: For Kirkland, the project represented a chance to do something that felt new, different, and not woefully played out, and for Córdova, it came out of feeling fed up with theory in her grad school classes, wondering how to bridge the abstract and the concrete. She’d been reading a lot of music theory, listening to a lot of dance music, and thinking about both of those things in relation to each other and to the Caribbean diaspora — that is, the way emigrants brought native musical traditions from Puerto Rico, Cuba, and elsewhere to the United States, where they melded with hip-hop, dance, pop, and R&B. She decided she wanted to try to pay tribute to that tradition, mostly for personal reasons rather than political effect.

“It’s kind of like a stab in the dark, but I feel like I’ve had this experience of immigration, or whatever you want to call it, or diaspora,” she explained. “And I’m feeling stuck, and I have this story, and I’ve never told it, and maybe it’s not important to anybody, but I want to tell it, and do so in this really specific tradition.” Kirkland happened to have an old synthesizer lying around, so Córdova fed him some abstract ideas as to what she’d like the song to sound like — “palm trees, darkness, with clacking sounds in the background” — and wrote a set of lyrics about Columbus’ “discovery” of North America to go along with it. That song became “Fiebre Tropical,” the lead single from the album, and both the mood and production process stuck: Before they knew it, Kirkland and Córdova had written and recorded an eight-song LP, released last summer by the Austin label Young Cubs.

Musically, the album is arresting, effortlessly and earnestly fusing Latin freestyle, Italo disco, Nineties pop, and electro, along the way referencing Santigold, Ana Tijoux, Madonna, and maybe MIA before she got annoying — and, of course, the cross-pollinated proto-mashups of the American melting pot that Córdova had originally been inspired by. Lyrically, it’s a loose but linear narrative told through the voice of ChuCha Santamaria, whom Córdova adopted as an alter-ego because she didn’t want the music to speak only to her own singular experience. “I wanted to make it universal by making it specific,” she explained. The first half of the record is about the presence of colonialism, while the second is about immigration and assimilation.

Heavy stuff, for sure, but here’s the thing: because Córdova sings primarily in Spanish, and because the lyrics tend toward the abstract, the narrative undertones are more implied than explicit, and it takes a close reading to parse ChuCha’s songs. Take “Grito de Lares (Ridox),” for example. On close inspection, it’s a ballad for a failed intellectual revolution of the same name, the first documented push for Puerto Rican independence. But on the dance floor, it’s a classic, perfect electro-pop jammer, with burbling arpeggios, a yearning chorus, moody synths, and a pruriently addictive heavy-breathing interlude. It’s most likely the only song ever written about revolutionary politics that can reasonably (and favorably) be compared to “Slave 4 U”-era Britney, and it’s fucking brilliant.

This, at its core, is what makes ChuCha’s music effective: it works on multiple levels, making itself accessible at whatever degree of attention the listener wants to pay. In other words, it’s a concept album wherein the concept is not required to enjoy the record. In that sense, it’s telling that the record’s been well-received by both the San Francisco art crowd and sixteen-year-old YouTube commenters from the Midwest — and that Córdova and Kirkland are equally thrilled to have both fanbases.”It’s important to us that all those things are there if you want to spend the time with it,” Córdova said. “But it’s okay if you just wanna dance.”

And, weirdly, that too is something of a political statement, as Córdova and Kirkland conceptualize it. “You give yourself identity, and other people give you identities, and the immigrant gets an identity,” explained Córdova, from behind her big glasses. “And then you have this perfect space on the dance floor where you can just be rid of that, at least for the duration of the song.”