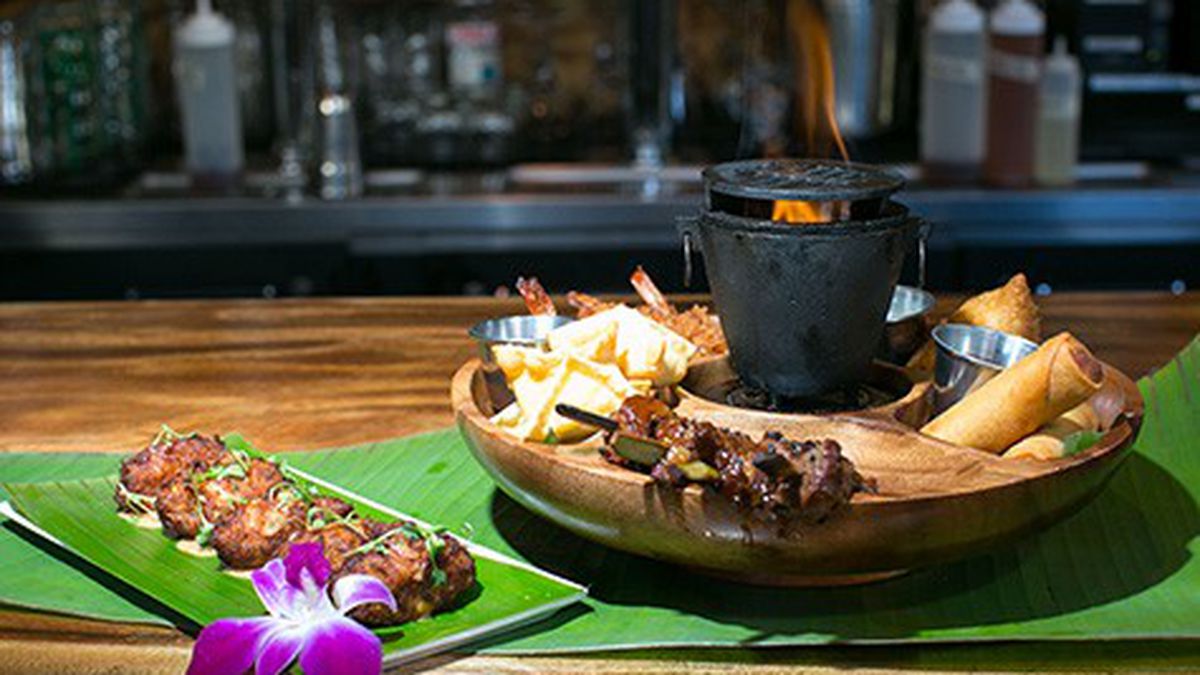 Choose Your Own Adventure

Longitude, Oakland's new "adventure bar," is great for drinks and bar snacks — though less so for a sit-down dinner.

The bar straddles the line between kitschy and classy, drawing on African safari culture and other “adventurous” locales instead of going full-blown Polynesian. And a globe-hopping menu includes dishes inspired by Asia, Africa, Great Britain, and beyond.

If you’re a hardcore tiki aficionado, you might already be a regular. But here’s what I wanted to know: Was the food any good?

Chef Laine Steelman’s most recent stints were at Hog’s Apothecary in North Oakland and, before that, Benchmark Pizzeria in Kensington — nothing remotely tiki-like is on his resume. By the time he signed on, the basic outline of the menu was already set, but Steelman embraced the challenge of using better ingredients to improve the “exotic” classics that were popularized during the tiki craze of the 1940s and 1950s.

If you’re going to only order one thing at Longitude, let it be a cocktail — one of the fifteen signature drinks, each one fruitier and more wildly garnished than the last. But if you’re going to order food, you could do worse than the Pu Pu Platter for Two ($23). While it’s no culinary masterpiece, it probably captures the tiki spirit of the place better than anything else on the menu. The sampler platter is served on a vintage-style wooden tray that spins like a Lazy Susan and has individual compartments for each pu pu item. In the center is a miniature hibachi “grill,” which the server lights up at your table so that you can char and caramelize the impressively meaty teriyaki beef skewers. The coconut shrimp — another tiki classic — had an admirably crunchy, coconut-intensive batter.

Because Longitude’s kitchen is very small, a handful of items get outsourced, including several components of the pu pu platter. Sometimes that worked out well: The pea-and-potato-stuffed vegetable samosa, which comes from Vik’s Chaat Corner in Berkeley, was a highlight — an item you might need to fight over, as the platter only comes with one. And the crispy house-made crab rangoons, with their airy, blue-crab-infused cream-cheese filling, benefited from the use of freshly made wontons wrappers from Oakland Chinatown. The vegetable spring rolls, on the other hand, were filled with cabbage and unidentifiable mush — and were no better than what you could buy in the supermarket.

Not included with the platter was Steelman’s take on Caribbean salt cod fritters, which were perhaps the best of the bar bites: hot, crunchy, and not at all shy about their fishiness.

By far the most popular time to visit Longitude is during its extended weeknight happy hour, which runs from 4 to 7 p.m. That’s when the place is at its most festive — and, not coincidentally, when bargain hunters are able to get the most for their money: a selection of $6 cocktails and $4 appetizers.

Of these, it’s worth trying the Kenyan m’bazzi pea beans, which are traditionally eaten after you get home from a safari, Steelman explained. The dish consists of navy beans that are stewed in coconut milk, chilled, and then served on a lettuce wrap. The bean mixture wound up looking remarkably similar to tuna salad. But it was also refreshing, with the occasional grain of coarse sea salt adding an enjoyable extra layer of flavor and texture.

And the thick, hand-cut Longitude and Latitude Fries (a mix of sweet potato and regular) weren’t noteworthy except that we got a whole mess of them for $3, and both dipping sauces — a spicy ketchup and a smoked-salt aioli — were tasty and vaguely curry-like.

Aside from the assorted “exotic” bar bites, the rest of the menu consists of traditional British pub dishes, a cuisine choice that, given the backdrop of vintage sailing maps and East African masks, lends the proceedings a kind of colonialist vibe. (Steelman said the theme was at least partly inspired by the British navy’s historical involvement in the rum trade.) Practically speaking, shepherd’s pie and a Northumberland-inspired take on mac ‘n’ cheese are a way to offer bar patrons a heartier food option.

But Longitude’s version of bangers and mash also spoke to the limitations of the kitchen — which isn’t equipped for sausage-making, so the restaurant sources British-style bangers from a South Bay purveyor. I can’t speak to the authenticity, but I would have preferred any other sausage. These had little pork flavor and the unappealing texture of steamed bologna. The mashed potatoes and onion gravy were fine, but because all of the food we ordered came to the table at once, they were lukewarm by the time we ate them.

Much better was Steelman’s fairly traditional shepherd’s pie: a soupy mixture of coarse, pleasantly chewy ground beef and meaty chunks of mushroom topped with mashed potatoes — the perfect thing to soak up the booze on a cold night. The dish came with a side of vinegary pickled vegetables, which — like most of the items at Longitude that were made from scratch in-house — were quite tasty.

The Express wrote about Longitude’s mostly rum-based drinks last month (“Tiki Makes a Comeback” 10/1), and all I’ll add is this: While I’m not normally a fan of the sweet cocktails that are Longitude’s stock-in-trade, I can see their appeal. The Shrunken Skull had a tangy kick from the house-made grenadine, and reminded me of a boozy jamaica agua fresca. My favorite, the Peter Love Grogg, was topped with excellent house-made maraschino cherries, and, despite its seemingly innocent fruitiness, was strong as all get-out.

Whether or not it’s your cup of tea (or, um, grog), Longitude does not lack for style. The monkeypod wood bar is a sleek, gorgeous thing, as are the vintage library card catalogs, which regulars can use to document all of the rums they’d sampled. The bar has so much tastefully applied faux foliage — extending all the way up to the ceiling — that it’s easy to imagine there’s an entire secret little ecosystem hidden up among the palm fronds. Adventure, indeed.

In The Heights at Contra Costa Civic Theatre