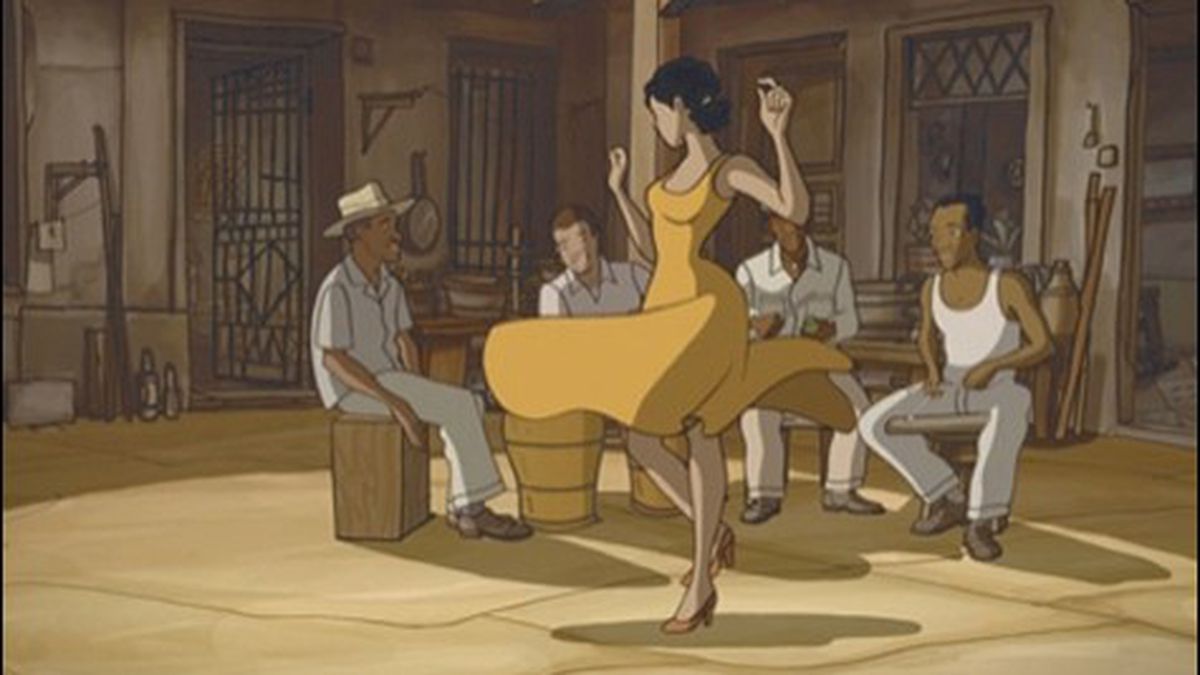 The non-nomination of The Adventures of Tintin and Cars 2 for the 2011 Academy Award in the “Animated Feature Film” category has prompted a degree of public outcry, especially among those who feel the Academy deliberately snubbed Steven Spielberg and Pixar. But the exclusion of such heavily backed projects shouldn’t be allowed to overshadow the achievement of one of the nominees — the gorgeous, joyous, disarmingly nostalgic musical confection Chico & Rita.

As conceived by the team of Spanish filmmaker Fernando Trueba (Belle Époque), art director Javier Mariscal, artist Tono Errando (Mariscal’s brother), and Cuban composer/musician Bebo Valdés, Chico & Rita etches the on-again, off-again romance between a singing sensation and an itinerant pianist, a small-scale story that achieves epic proportions as Rita and Chico follow their personal destinies in the international jazz scene of sixty years ago. The Bebop and Afro-Cuban “Cubop” era has been covered in film before — Bird; New York, New York; and Andy Garcia’s Cachao … Como Su Ritmo No Hay Dos, come to mind — but seldom with such visual poetry.

The story opens in contemporary Havana, where taciturn shoeshine man Chico (speaking voice played by actor Eman Xor Oña, with Bebo Valdés handling his singing) is reminiscing about the days when he first met Rita (Limara Meneses, speaking, and Idania Valdés, singing). Flashback to 1948. Chico plays piano in a club and digs the crazy sounds of bebop that have just arrived from Nueva York. He also digs the languid, sexy young woman who shows up one night and sets the place on fire with her version of “Bésame Mucho.”

They flirt and end up in bed — this is guaranteed to be the only animated feature you’ll see this year with full frontal female nudity — but Rita takes a cool, distanced attitude with hang-loose Chico, even though he’s plainly crazy about her. So begins their transcontinental hit-or-miss saga. Rita’s career takes off like a rocket and soon she’s headlining in Manhattan, while Chico follows her footsteps in a somewhat minor key, scuffling for gigs where his amor, now known as Rita LaBelle, glides gracefully. Every time she looks over her shoulder, he’s there. Before they’re finished we get to see mambo-era New York, Las Vegas, Hollywood, and Paris as well as pre-revolutionary Havana — all rendered in wildly detailed, filled-in line drawings in Mid-Century Modern style, much like the nifty titles.

Those places were garnished with beatniks and flipsters then, and the filmmakers treat us to cameos by such jazz legends as Charlie Parker, Thelonious Monk, timbalero Tito Puente, Nat King Cole, and tenor saxman Ben Webster. An extended sequence is devoted to the fiery Chano Pozo, the two-fisted Cuban percussionist in Dizzy Gillespie’s band — Chano goes ballistic in Harlem when someone sells him oregano instead of reefer. All the tunes in the film are newly recorded by jazz musicians in Cuba and New York. Saxophonist Jimmy Heath stands in as Ben Webster, and Todd Barkan, onetime owner of San Francisco’s legendary Keystone Korner jazz club, serves the production as the New York musical coordinator.

The effect of all this Cubop-inspired classic hipsterism is simultaneously glamorous and bittersweet. Chico becomes a sad, forgotten old man. Fidel Castro bans jazz as a yanqui decadence. Meanwhile Rita gets a bellyful of Norteamericano racism, and says so. The screenplay by co-director Trueba and Ignacio Martínez de Pisón takes a casually skeptical, thoroughly European view of the pitfalls of fame, American-style. Maybe that’s what impressed the Academy members. But we like to think it was the way the two young lovers moved down the street after catching Woody Herman at the Tropicana. ¡Que bomba!

Best Meal for $1 or Less