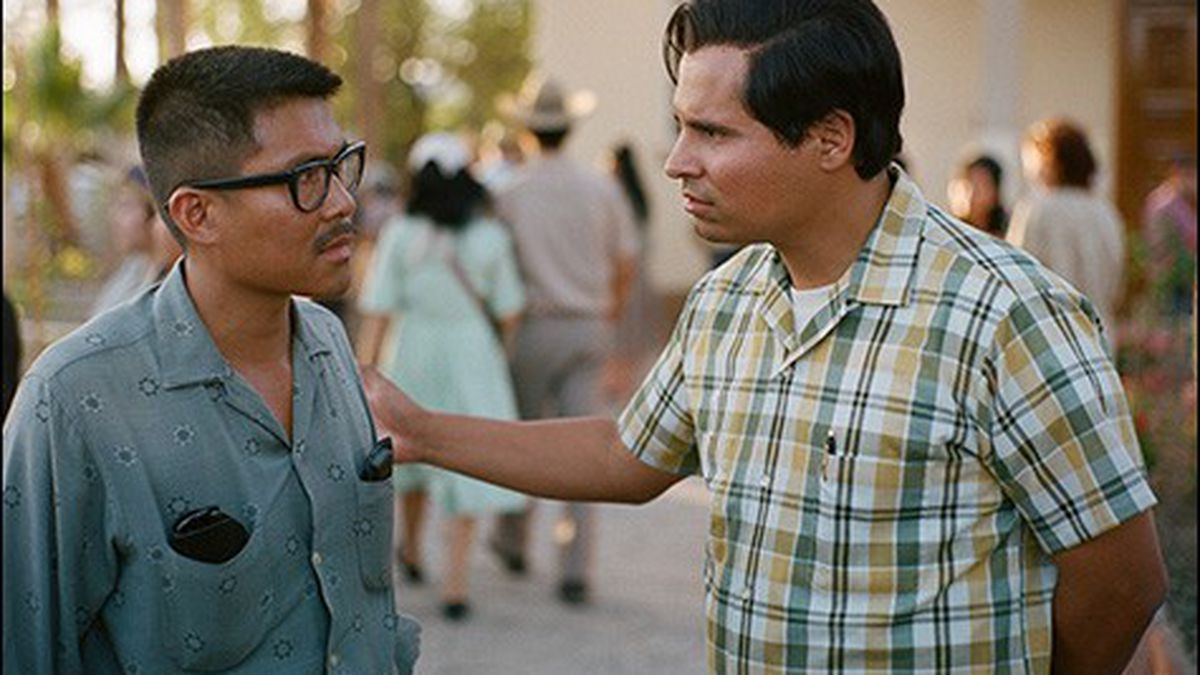 Cesar Chavez opens in theaters with little advertising or hoopla. It’s the story of a man a lot of people have heard of but don’t know much about, except that he’s a hero to farm workers and Latinos, and has streets named for him all over California. But director Diego Luna’s plain (in the most exalted sense of the word), straightforward biography of the late civil rights champion and union organizer finds the sweet spot — the human interest angle that brings Chavez and his times to life like no documentary could.

We join Chavez — played in down-to-earth, single-minded terms by Michael Peña — already in progress, recruiting Mexican immigrant fruit and vegetable pickers in Delano, Kern County, in 1962, and facing violent resistance from the growers and their goons, including the local sheriff (Michael Cudlitz). The sheriff and some members of the white community are nominally afraid of foreigners and “communists,” but we can see that behind the scenes, the broccoli and grape kings — symbolized by a grower called Bogdanovitch (John Malkovich) — simply don’t want to pay more for labor, and are using race hatred and reactionary politicians like Ronald Reagan and Richard Nixon (both shown in newsreels) to forestall the day when they’re forced to negotiate with Chavez’ National Farm Workers Association and pay a fair price for back-breaking work.

Through it all, despite provocations and indignities, Chavez walks a non-violent line. He puts out newspapers and leaflets, goes on a hunger strike, goes to jail, gets sprayed with DDT, organizes boycotts, and exercises his right to peaceable assembly. Onscreen, his life takes on the flavors of Mahatma Gandhi, Nelson Mandela, and Harvey Milk, yet it never gets that embalmed feeling that kills the narrative. Mexican actor-turned-filmmaker Luna (Milk, Y Tu Mamá También) takes care to get the little details right, such as when Robert F. Kennedy takes communion with the ailing Chavez and his followers in a field. It was a genius touch to cast Malkovich as the scheming Bogdanovitch — he’s the shot of Croatian slivovitz in the cerveza. America Ferrera (as Chavez’ wife Helen) and Rosario Dawson (labor heroine Dolores Huerta) also contribute to the atmosphere. Luna and screenwriters Keir Pearson and Timothy J. Sexton even remember to pay tribute to the Filipino manongs in Delano whose labor actions dovetail with those of the NFWA.

Cesar Chavez, shot on location in Sonora, Mexico, lists Malkovich and Gael García Bernal among its producers, and the credits feature a number of logos we seldom see at the end of movies, including SAG-AFTRA and Budweiser (gasp!). From all appearances it’s a work of love and respect, from the director all the way down to the juvenile extras in the onion fields. Chavez was a true champion of the poor. Pass the USA grapes.