The nonprofit cafe serves Cheerios with chocolate chips for charity. 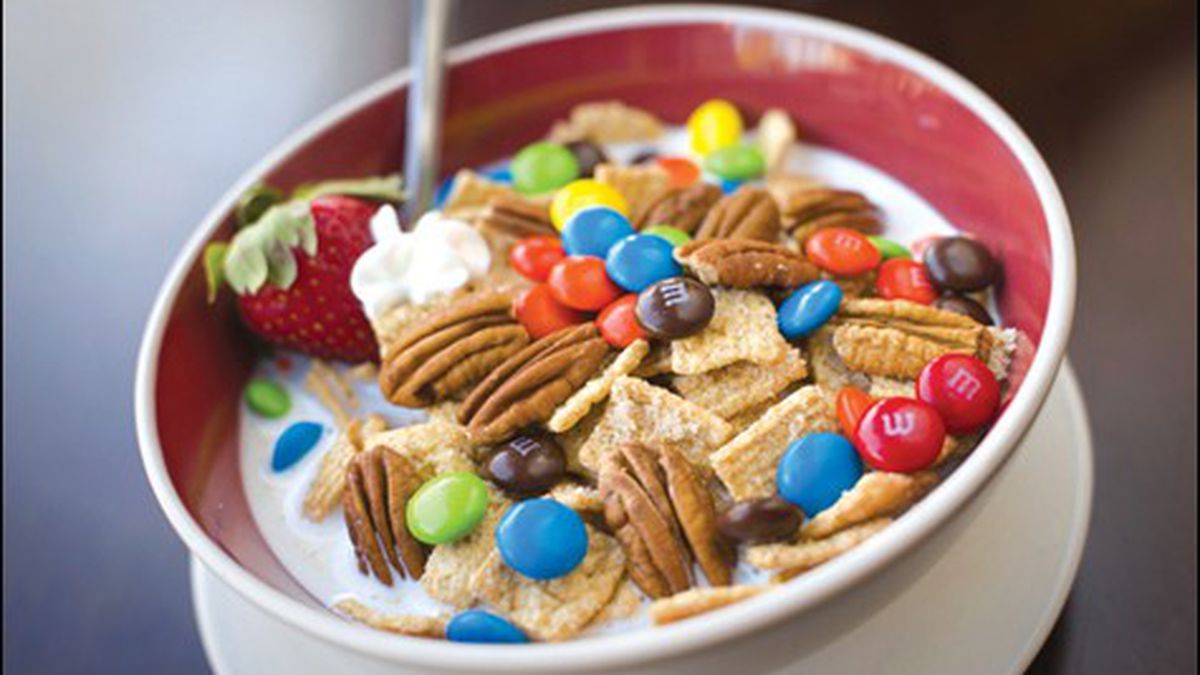 In certain fairy tales and parables — think “The Frog Prince,” “Beauty and the Beast,” and Odysseus disguised as a beggar — a character is temporarily hideous. It’s a test. While the world at large is cruel, at some point in these tales a special person spots — and liberates — the sweet soul shining through those scabs and rags. This special person is rewarded with love, riches, and maybe even royalty.

Try it sometime. Wander into trendy urban cafes when you know you look horrible. In most, you’ll be served desultorily. In some, you’ll be ignored until you just give up and leave. In Cafe Yesterday, a new nonprofit co-founded this year by an accomplished keyboardist and his Hollywood actor/director/screenwriter best buddy, you’ll be welcomed with warm grins and called “my friend” so firmly that you’ll believe it.

You’ll keep on believing as you scan the menu, which sports Mediterranean-inspired salads and jaunty, original, made-to-order hot sandwiches on Acme bread. The pastry case holds an ever-shifting array of house-baked desserts (such as big, chewy chocolate-chip cookies and picture-pretty apple-crowned cranberry bread pudding) that are served free on Fridays before noon. San Jose-based Barefoot Coffee — organic, fair-trade, hand-selected beans from remote farms — is brewed velvety-smooth via the Hario V60 pour-over method into such treats as caramel macchiato and peppermint mocha.

And you’ll keep on believing as a barista waits, beaming, for you to order what you really want: a red-white-and-blue-bordered bowl of Frosted Mini Wheats scattered with broken Oreos, drizzled with chocolate sauce, and squirted with whipped cream. Fruity Pebbles and Cap’n Crunch drenched with Nutella, dotted with miniature M&Ms. Feeling conformist? Brown sugar and strawberries on Special K. Grape Nuts with bananas and wheat germ.

In such a genuinely have-it-your-way context, what can one review? But based on personal experience: Oatmeal with blueberries, coconut, and caramel sauce feels like royal Hawaiian comfort food. Reese’s Pieces over granola merge the rustic with the devilishly decadent. Anything with walnuts or pecans is a party, as these nuts are whole and huge and, depending on who serves you, come heaped by handfuls or arrayed in artful flower shapes.

So easy — and nobody has to know. You couldn’t keep all these components in your home kitchen — Cocoa Puffs, Frosted Flakes, and Lucky Charms; chocolate chips, chocolate sauce, Gummi Bears, Trix, and Kix — and still be viewed as an adult. But Cafe Yesterday serves them all day and well into the night. You can even eat cereal during the cafe’s Thursday-evening open mics. Is any time not suitable for eating cereal? Of course not. Cereal is the black ballet slippers of cuisine.

Or you could stick with waffles, salads, bagels, burritos, and sandwiches. The Double D is a double-decker bacon/avocado/melted pepper jack/lettuce/tomato/hot herb-roasted turkey on a croissant. The Milvia is ham and melted Swiss. Meatless sandwiches include a falafel-style chickpea-stuffed foldover and a creamy, indulgent artichoke-cheese melt. Acme bread makes these all luxurious. Each comes with a side salad or indulgently thick potato chips.

Chances are, your beaming barista is either Ryan Brinson or David Schultz. Brinson’s the keyboardist. Schultz is the Hollywood guy; he wrote, produced, and co-starred in Not Another Not Another Movie, a comedy starring Chevy Chase and Burt Reynolds that’s due out this fall. You might also recognize him from such films as Skid Marks, The Chronicles of Nunchuck Guy, and You’re So Dead.

The multitalented Southern California transplants opened Cafe Yesterday in January on the ground floor of the brand-new Campanile Court student-housing compound. A portion of the cafe’s proceeds are earmarked for programs benefiting needy artists and the homeless. Brinson and Schultz also cater charity events.

“We’ve both done so much work in the nonprofit sector, and we wanted to find a new way to generate profit that could be reinvested into the Berkeley community,” Brinson said. “It took some mental acrobatics, but this is what we came up with.”

Schultz has wanted to act and do comedy for as long as he can remember: A poster depicting his childhood hero, John Belushi, overlooks Cafe Yesterday’s counter. But if sound stages have always felt like home to Schultz, so have restaurants: His father is an award-winning executive chef. Schultz began cooking omelets and Mediterranean specialties at age six. Before the cafe opened, Schultz asked his dad what to put on its menu. “He told me, ‘Let your customers decide.’ That was perfect advice.”

Service is not speedy here, even for cereal, so don’t expect to be in and out in a flash. But once you’ve walked into a parable where smiles actually mean something, who cares?