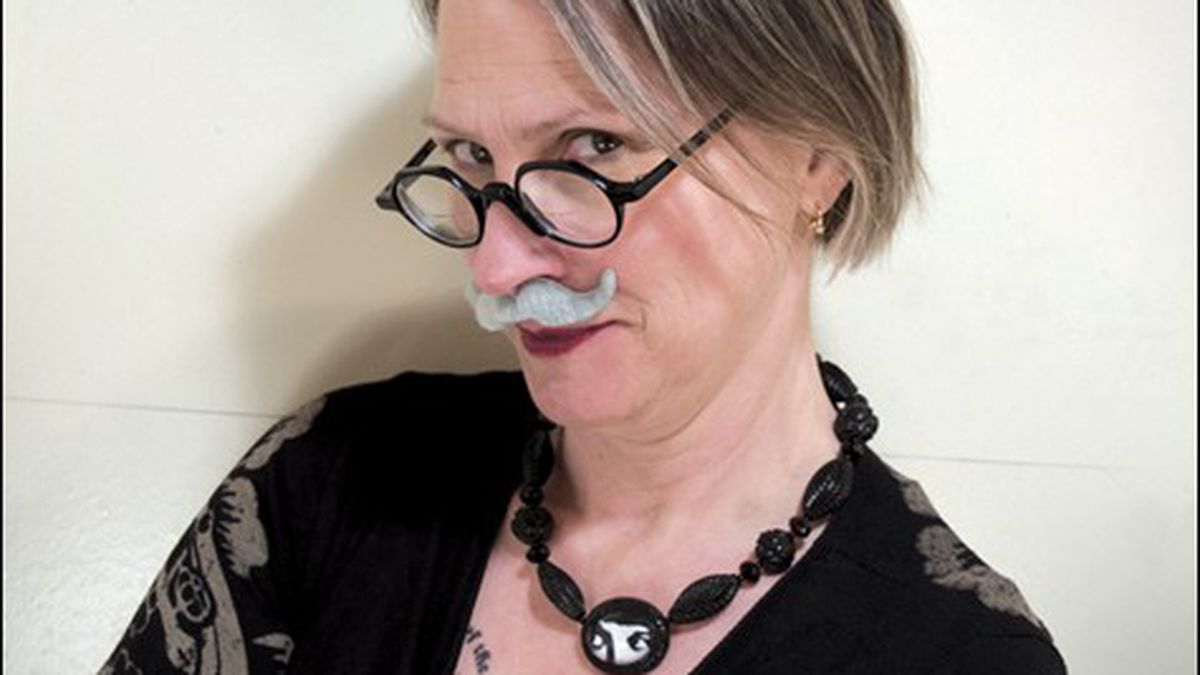 The author and sexologist offers a step-by-step in exhibitionism for the shy.

The second and third floors of Good Vibrations‘ San Francisco headquarters look like any other office building, but for the leopard-print carpet and a copy of Bust magazine strewn carelessly on a conference room table. The ground floor, in contrast, resembles a warehouse. It’s lined with movable shelves, each stacked with cardboard boxes, all bearing the now-famous logo of a half-naked woman in a state of bliss.

“Who would have thought the sex toy industry would be this dependent on cardboard boxes?” asked resident sexologist Carol Queen, who holds court in the warren of offices upstairs. “It’s like, without cardboard, we would never get off. Except with each other.”

Queen characterizes herself as a “recovering shy person.” At 53 years old, she is smaller, daintier, and more school-teacher-ish than the term “sexologist” might suggest. She wears glasses, keeps her hair in a smart bob, and paints her nails scarlet. Last Wednesday she arrived to the office dressed entirely in red and black, with a red sweater and beaded necklace covering the spider-web trim on her shirt. She drank tea in a mug with a picture of a queen. She described her shyness in terms that a Twelve-Stepper might use to discuss his sordid past.

“A lot of things worked together to help me get over that painful, embarrassing state in which I could barely talk and wanted more than anything to disappear,” Queen wrote in the updated second edition to her book Exhibitionism for the Shy: Show Off, Dress Up and Talk Hot, which she just published. The book is partly a work of political activism, in that Queen wants to remove the term “exhibitionism” from the Diagnostic Statistic Manual of Mental Disorders, where it’s classified as a perversion, or illness. To Queen, shyness is the real pathology, here. Perversion is the cure.

Queen wrote the first iteration back in 1995, a few years after she moved to Berkeley to pursue a Ph.D in sexology. Sex had been the linchpin of her existence for decades. Growing up in rural Glide, Oregon — “one of those little-bitty-wide-spot-in-the-road towns,” she said — Queen was the type of teen who would trek thirty miles to browse sex manuals at the library. As a babysitter, she would browse other people’s bookshelves and find whatever smutty material was cubby-holed in back. In her senior year of high school, Queen proclaimed herself bisexual.

Any other self-identified queer person might elicit scorn in small-town Oregon, which, according to Queen, was still mired in a mentality out of the Forties or Fifties. But Queen was already well-known for quirkiness. She knew that a sexual revolution was happening everywhere else in the world. “I was a weird kid in that town,” she said. “I was a Martian.”

The Seventies had, in fact, reared their ugly head in Eugene, Oregon, where Queen moved after graduating high school. She spent several years pursuing a bachelor’s in sociology at the University of Oregon, while immersing herself in “dyke drama.” Queen credits her first girlfriend for a sexual awakening, of sorts. “Not only had Natalie never been shy, she had always been orgasmic, had masturbated as far back as she could remember, and was very accustomed to making the first move,” Queen wrote in Exhibitionism. Their relationship lasted five years, and during that time, Queen learned how to talk during sex and give directions without feeling manipulative. She said it was liberating.

A constellation of circumstances helped beget Exhibitionism. One was Queen’s own coming-of-age, which she attributes to lovers, sex parties (where she learned how to jack off in front of people), and activism in the LGBT community (she founded the organization GAYouth in 1975, and also fought against Anita Bryant‘s anti-gay campaign in 1977. Upon moving to the Bay Area, Queen began her Ph.D program at the Institute for Advanced Study of Human Sexuality. She took a customer-service job at Good Vibrations, and began working nights at The Lusty Lady Strip Club in San Francisco. From 1997 to 2001 she penned a sex advice column for the East Bay Express. Sex went from being an intellectual fascination, to an obsession, to a full-on vocation.

For Queen, though, sex wasn’t just about getting off, or even about enlightenment. It was an antidote to shyness. In a sense, exhibitionism provided a way to let go of something that had always crippled her. “The biggest thing about shyness is that you feel like you’re stuck there,” she explained. “Nobody wants to be shy. Plenty of people are happy being introspective and quiet … but nobody wants to be shy, and feel like they’re impaired from communicating with someone they think is interesting, or even from picking up the phone and calling the doctor. Super-super shyness is a hard place to be.”

In her early days at Good Vibes, Queen encountered super-shy customers who also were looking for a way out. “I would have customers come up to me and say, ‘I just don’t feel comfortable about sex; is there a way I can feel more comfortable?'” Queen said she empathized. At the same time, she realized that not everyone feels comfortable going to sex parties, or undressing in front of people. She wrote her book as an easy step-by-step manual for amateurs — those of us who try to talk dirty, but trip on the words. Talking dirty is one of the core stepping-stones in Exhibitionism, along with role-playing, finding the right partner, and confronting body-image issues. Queen’s most interesting contribution is the idea of “solo” exhibitionism — that you can show off by yourself. She contends that some people are exhibitionists only in their fantasy lives.

The first iteration of Exhibitionism for the Shy existed in a completely different context. E-mail was more a novelty than an essential form of communication. Practitioners of weird sex had to find each other through newspaper personals, or word-of-mouth, rather than web sites. (Queen actually recommends running a newspaper ad as a way to find partners, which seems a little quaint by today’s standards, but God bless her.) “Sexting,” blogs, and social networking sites didn’t exist yet. Most exhibitionists operated the old-fashioned way, by undressing on a pool table, rather than posting lewd photographs in the digital domain. Things were a lot slower, but at the same time a lot safer. Indeed, said Queen, in the old days there were certain protections on exhibitionistic behavior that don’t exist anymore. Yes, you could be arrested for public masturbation — the guy who jumped out from behind a tree at Tilden Park was being inappropriate, and committing a crime. But most “consensual” exhibitionists could engage their desires in a private sphere without having to worry about leaving an indelible footprint.

That’s no longer the case, said Queen, who admits that even as our culture at large has grown more voyeuristic and exhibitionistic, it’s also become increasingly prudish and judgmental. In some ways, she’s toying with a much dicier issue. “If people aren’t thinking through the effects of their exhibitionism, they might not get the effects they want to get,” she said. “That goes for shedding your top on a pool table in a bar, or sexting, or posting the details of your sex life on Live Journal and forgetting people know how to get to it — even if you think it’s password-protected,” she said.

Queen is certainly no fan of censorship. But she admonishes readers to use discretion anyway. “Sexting” might flow naturally from that “social-connecty, curious, playful, hook-upy, partner-finding phase” in which most teenagers find themselves. It can also result in a child pornography charge. Sometimes, said Queen, it’s better to exhibit with the curtains closed — or at least without the aid of wireless communication devices.

“The overarching message isn’t that you should take your bra off, and throw it at a mounted policeman in the park,” Queen said. She paused for a moment, contemplating the idea. “Although — that could be fun.”

Return of the Wolff