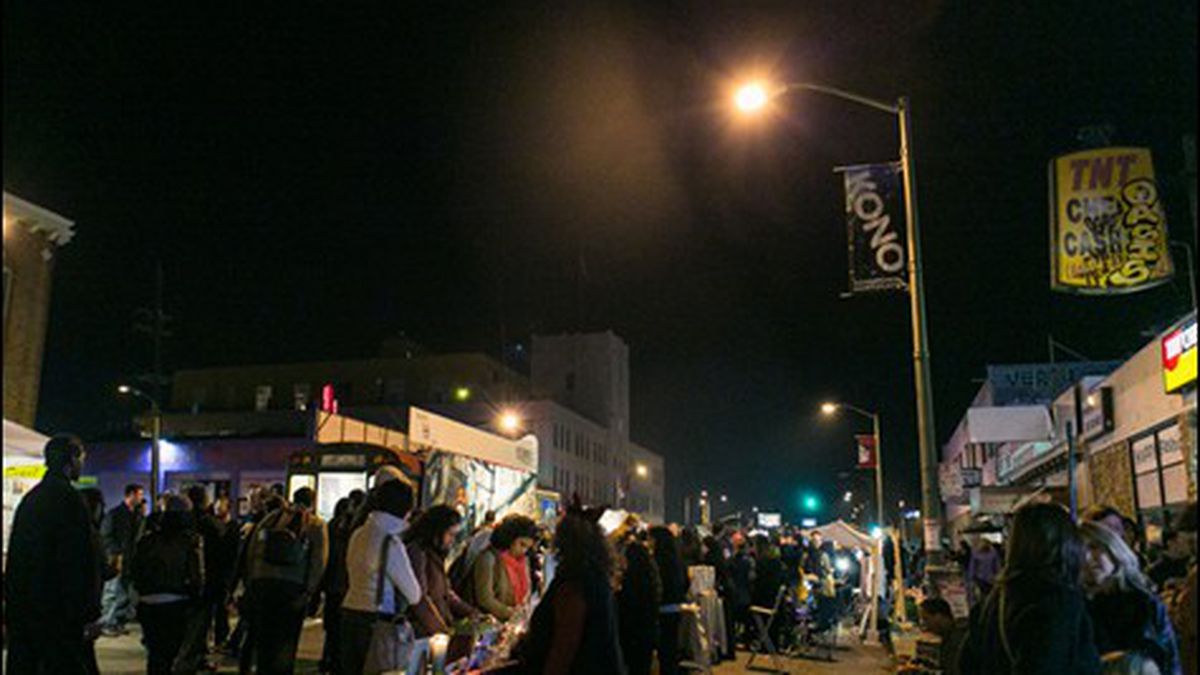 Despite the success of First Friday, the Koreatown Northgate district has been plagued by vacant storefronts. Can the small-business incubator Popuphood help?

Once a month, thousands of people flock to the area around 23rd Street and Telegraph Avenue for Art Murmur and First Friday, crowding the sidewalks, art galleries, liquor stores, and bars. But come to this neighborhood any other time of the month and it’s nearly empty. Although there are a couple of bustling markets — Oasis Food Market and Koreana Plaza — the area has mostly been known for its crime, drug addicts, and homeless population.

The folks at the Koreatown Northgate Community Benefit District (KONO) have been wrestling with this dilemma for years. But now, they may have an answer in the form of Popuphood, the small-business incubator that helped bring a handful of new retailers to Old Oakland by negotiating six months of free rent with landlords, with the goal of them signing long-term leases.

“We reached out to Popuphood because I had heard about their success in Old Oakland,” said Shari Godinez, KONO’s executive director. “We had a 43-percent vacancy rate over here for commercial vacancies. So I felt like it would be a perfect match for our district. … They were my spark of hope for bringing retail to this area.”

Last fall, Godinez hired Popuphood founders Sarah Filley and Alfonso Dominguez to do a preliminary assessment of the area. But their recommendations, which they recently submitted to the district, go beyond the model of simply finding retailers to fill empty storefronts. And that more “holistic” approach could have further-reaching impacts on the neighborhood than what’s been tried before. “KONO doesn’t have the foot traffic to support the retail,” said Filley. “They have an incredible gallery district, but a lot of those galleries are only open by appointment or only open on First Fridays. So it doesn’t create incentives for people to shop frequently or go to lunch.”

“The project with KONO is how do we create a sustainable community,” added Dominguez, noting that Old Oakland is a much more walkable and physically attractive area for retail. “What’s missing in KONO is a sense of place and community,” added Filley.

Indeed, the biggest challenge is how to translate KONO’s one night of intense popularity into an everyday occurrence. Thus, Popuphood’s recommendations include things that would attract more people to hang out in the neighborhood, such as parklets and coffeehouses. Filley and Dominguez also view that approach as an alternative crime-fighting strategy (currently, the bulk of KONO’s money goes to security and cleaning services). Noting that the area is a major thoroughfare with heavy bike traffic, Filley and Dominguez have also reached out to the East Bay Bicycle Coalition, and are pondering bike lanes and cyclist shops. They’re also looking at ways to engage that neighborhood’s largest employer, Alta Bates Summit Medical Center, with housing and businesses that cater to its workers. Lastly, Filley and Dominguez have enlisted the help of students at the California College of the Arts. This semester, instructor Liz Ogbu is teaching a class called Creative Disruption, which seeks to “understand the needs and desires [of] the diverse constituencies of the Koreatown-Northgate as well as propose opportunities for engagement.”

It makes sense that Popuphood would take a different approach in KONO than in Old Oakland. For one, KONO is spread out, spanning Telegraph from 20th to 35th streets, and includes a more diverse demographic. It’s also had some trouble with its image: Some residents got pissed off when the district first tried to brand itself as Koreatown. The KONO office was recently vandalized, and fliers have been circulating about how “KONO is trying to erase” the neighborhood. “They’re targeting our organization,” Godinez said, “but they seem naive to the structure and what this organization does.”

Indeed, in recent years KONO has worked to involve the community in its endeavors. Its numerous committees are made up of residents who are actively involved in decision-making, and its marketing and economic development committees will soon decide which Popuphood-proposed projects they’ll move forward with. “Everyone is welcome to the board and committee meetings,” said Godinez.

Traditionally, cities have taken the lead in efforts to revitalize neighborhoods. But with budget cuts and the slowness of city bureaucracy, many residents and business owners find they can no longer rely on city infrastructure to meet their needs — hence the proliferation of community benefit districts (CBDs) and business improvement districts (BIDs), which supply neighborhoods with services such as cleaning and security, funded with taxes on property owners and businesses. Oakland has nine such districts.

But even those are limited in what they can do. Filley and Dominguez see their work not only as filling the gap left by a cash-strapped city, but also as a guerilla-style method of economic revitalization. One tactic Popuphood is advocating is using low-cost data collection techniques to drive development projects, such as a bike counter to collect data that might justify the creation of bike lanes. Filley hopes that these kinds of tactics might be implemented at the city level, and that other CBD managers could use their approach in their respective districts. “We see a clear pathway and we want the city to work with us to create that small business economic development plan,” said Filley.

Popuphood’s efforts are part of a nationwide trend of using low-cost, innovative strategies for urban revitalization. Filley and Dominguez said they have been sharing their ideas with people in Philadelphia, Miami, New York City, and Detroit. “We’re seeing so much interest around the country and in other cities, linking that to overall health of other cities,” Filley said. “It’s starting to make us look at how workforce development is becoming a key issue in social justice. … Working with KONO is an opportunity to replicate our model on a bigger scale.”

They also hope other neighborhoods in Oakland and Berkeley will take note. Berkeley’s economic development manager Michael Caplan has met briefly with Filley, and said that while the city doesn’t have the budget to explore popups, its business improvement districts do. “I think the popup idea is a strong one,” he said. Downtown Berkeley has had two popups — one relocated to Fourth Street just a month after opening. In downtown Oakland, at least two businesses — Owl N Wood and the Betti Ono Gallery — were the result of popups, and the Laurel district has also toyed with the idea.

Other BIDs are looking to First Fridays’ success as a model for revitalization. Craig Becker, the board president of the Telegraph BID in Berkeley and owner of Caffe Mediterraneum, said they’re looking at ways to increase nightlife on Telegraph near campus through better lighting and by allowing businesses to stay open for 24 hours. And two proposed businesses — Ken Sarachan’s Mad Monk in the old Cody’s building and an arthouse cafe where The Blue Nile restaurant was — would add much-needed live entertainment options to the area.

Over in KONO, things are already beginning to improve. Godinez said the area’s commercial vacancy rate is now down to 25 percent thanks to several news businesses that have opened or will open in the near future. She largely credits the popularity of First Friday, which has become so successful that some businesses make their entire month’s rent on that one night. However, now that the city is scaling back the event after the shooting in February, there are concerns about how that might affect KONO’s momentum. “My personal opinion is I would like to see it expand and stay open until at least 10,” Godinez said of First Fridays. “When I see every people lined up at the food trucks at 9 o’clock and security is trying to get them to shut down, that’s lost revenue. … It’s such an awesome positive event for Oakland. We need to find a way to support it.”