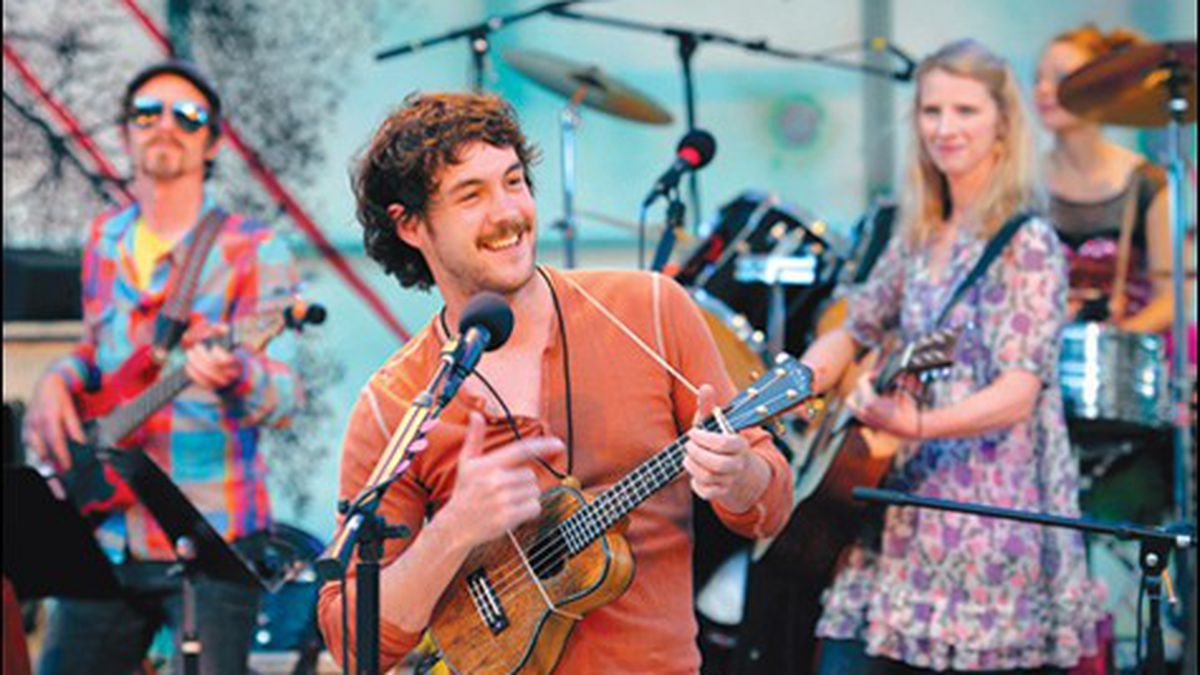 Flashy costumes, modern language, and rock instruments might be the only way to truly spice up Shakespeare’s Two Gentlemen of Verona, which is oft considered the bard’s most threadbare play. So thought John Guare and Galt MacDermot, whose 1971 rock musical rendered Two Gentlemen as a psychedelic Summer of Love revue. So, too, thought writer-director Amanda Dehnert, whose new play, The Verona Project, is part concert (no apparent relation to the Guare-MacDermot work), part camp, part gay marriage legalization plea, part magical realist story, and partly loyal to its source material.

And, as such, it has an anomalous presence on the summer calendar for California Shakespeare Theater. While Cal Shakes certainly doesn’t object to imaginative reinterpretations — like Jonathan Moscone’s 2009 urban turf-war rendition of Romeo and Juliet — it’s not normally in the business of completely transforming an old text. But that’s exactly what The Verona Project sets out to do.

For the most part, it succeeds. Dehnert’s play starts out not in Verona, but in a similarly provincial town called True, where our two male leads — the math geek Proteus (Dan Clegg) and poet Valentine (Nate Trinrud) — talk to each other through tin cans and endure taunts from the neighborhood girl, Julia (Arwen Anderson), who eventually becomes the object of Proteus’ affections. The end result is heartbreak for Valentine, who is secretly gay and must travel to “the big city” to find himself. Proteus eventually follows suit, for no apparent reason other than his own wanderlust — in Greek mythology, the sea-god Proteus is known for constantly changing shape. In Dehnert’s version, that tendency has a deeper Freudian significance.

In fact, several characters undergo journeys of self-discovery in The Verona Project, which makes the play both more interesting, and more aggravating, than its forebear. Sylvio, played by Philip Mills, is the male version of Valentine’s original love interest, Sylvia. That means it’s a gay love story that becomes a gay love triangle: When Proteus comes to the city, he forswears Julia, and decides to woo Sylvio instead. Then Julia arrives disguised in men’s clothing, and the triangle becomes a quadrilateral. It’s all deliciously complex.

Maybe that’s not particularly startling in the progressive Bay Area. But it’s still a bold editorial decision, if only because Dehnert changes the subtext of the story from one of social class — Sylvia was the daughter of a duke, and therefore fit only to marry a rich fop — to one of gay liberation. “Perhaps, in another love, in another city, the marriage is meant to be,” one of the actors says, toward the end of the first act.

But even with the platitudes and homilies, The Verona Project manages to be thoroughly entertaining. It’s a musical, after all, so the actors are also members of an eight-person rock band, and they’re all proficient in multiple instruments. Mills handles a guitar and drums in addition to playing Sylvio. Adam Yazbeck, who plays Sylvio’s aristocrat father, also switches between accordion and piano. Marisa Duchowny plays keyboards and everybody’s mom, while bassist Harold Pierce is savagely funny as Proteus’ messenger, Speed. Drummer Elena Wright sports a tutu as Sylvio’s material girl bride. All of them sing, and while the vocal quality varies, it’s still good enough overall to generate the wattage of a real rock band. Dehnert delegated certain people to mostly play music, and others to mostly act, so the division of labor seems about equal.

Of course, there are other elements to help create a rock concert atmosphere, like the paint-splattered band shell designed by Daniel Ostling, or the costumes, which include knee-high boots, hippie dresses, fedora hats, and dinner plate belt buckles — all put together by Melissa Torchia. Other touches, like the fabulously low-tech setup that renders the ghost of Sylvio’s mother into a giant oak tree, shows particular ingenuity on behalf of the crew. The whole show certainly isn’t lacking for visual appeal.

So perhaps the play’s only real shortcoming was the same thing that made it engaging: Dehnert’s idea of foisting modern social credos onto a 16th-century text. She preserves a few chunks of script that sound like they came from the original play (littered, as they are, with “thees” and “thous” and “thou arts”), but most of the language, and most of the sentiments, sound thoroughly modern.

To be fair, Shakespeare probably wouldn’t have disputed gay marriage. Like Proteus, he’s assumed to have been omnisexual, and therefore inclined to follow both his heart and his will. (“Who I am is made of what I want,” Proteus says in the play.) But he might have recoiled at the neatly psychological resolutions at the end of the play, which involve, among other things, absentee fathers, grief, bereavement, aborted childhoods, and other things that didn’t come into vogue until the Seventies. The last scene — considered the weakest in Shakespeare’s oeuvre — was too hasty in its original form. Dehnert goes too far the other way, and makes it all about processing feelings. That’s no way to end a rock concert.