.Caffeine vs THC: The Double Standards of Addiction

About 1 percent of the population is addicted to a drug that gives them headaches if they quit, and may cause jitters, anxiety, insomnia, and ulcers if they don’t. It’s lethal at high doses. About 90 percent of the US population takes this drug regularly, even though it has no medical use. It’s marketed to kids, sold in or near schools, and is on school playgrounds. A schedule 1 narcotic, you assume?

The San Francisco Chronicle looked at the emerging definition of “caffeine use disorder” this week, noting that roughly one in ten people meet key criteria for caffeine use disorder: they wanted to cut back but could not despite knowing that it was causing them harm, and they suffered withdrawal symptoms when they tried to quit.

“’I’ve tried to quit it, but I get headaches’,” said one caffeine addict in the story.

“’I’ve seen people who have gone to great lengths to get caffeine when it was unavailable,’” a researcher added. “’I knew one woman who pretty much ruined her husband’s tropical vacation because she spent half the day looking for caffeine.’” 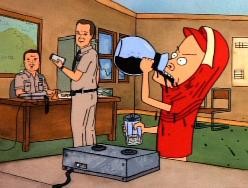 Two cups of coffee can cause headaches, anxiety, and jittery hands. And higher doses – like six shots of espresso – can cause mania and psychosis and eventually death. Caffeine is a very addictive and is analogous to nicotine.

“‘There are people who have chronic reflux, stomach acid pain, bleeding, hemorrhoids – all because of coffee. They’re suffering a lot,'” said Keith Humphreys, a Stanford addiction expert quoted in the story. “‘But they try and they fail to stop.'”

However: “for something to be considered an addiction, it needs to be truly disruptive – causing problems in personal relationships, for example, or interfering with the ability to work,” the story continued.

And herein lies the double standard:

— Conversely, any amount of marijuana use can cause “problems in personal relationships.” because half the country thinks any use at all is deviant, illegal behavior. “About half of Americans (51%) say they would feel uncomfortable if people around them used marijuana while 48% would not,” Pew reported.

Even if marijuana is not interfering with one’s ability to work, off-hours use of pot is grounds for immediate employment termination.

As Dr. Sunil Aggarwal noted, rates of purported marijuana addiction are probably lower than everyone believes, because several criteria for pot addiction have little to do with personal behavior, and everything to do with the social consequences of prohibition.

As Time Magazine keenly noted: “[I]t may be the social consequences of using marijuana that are more harmful than the physical ones. Peele notes that being convicted for marijuana possession can make a college student ineligible for federal student aid. ‘No psychologist in the universe could possibly say that smoking marijuana is worse for you than being deprived of the opportunity to get an education,’ says Peele.”

Next ArticleCourt Ruling Could Help Delta and Fish