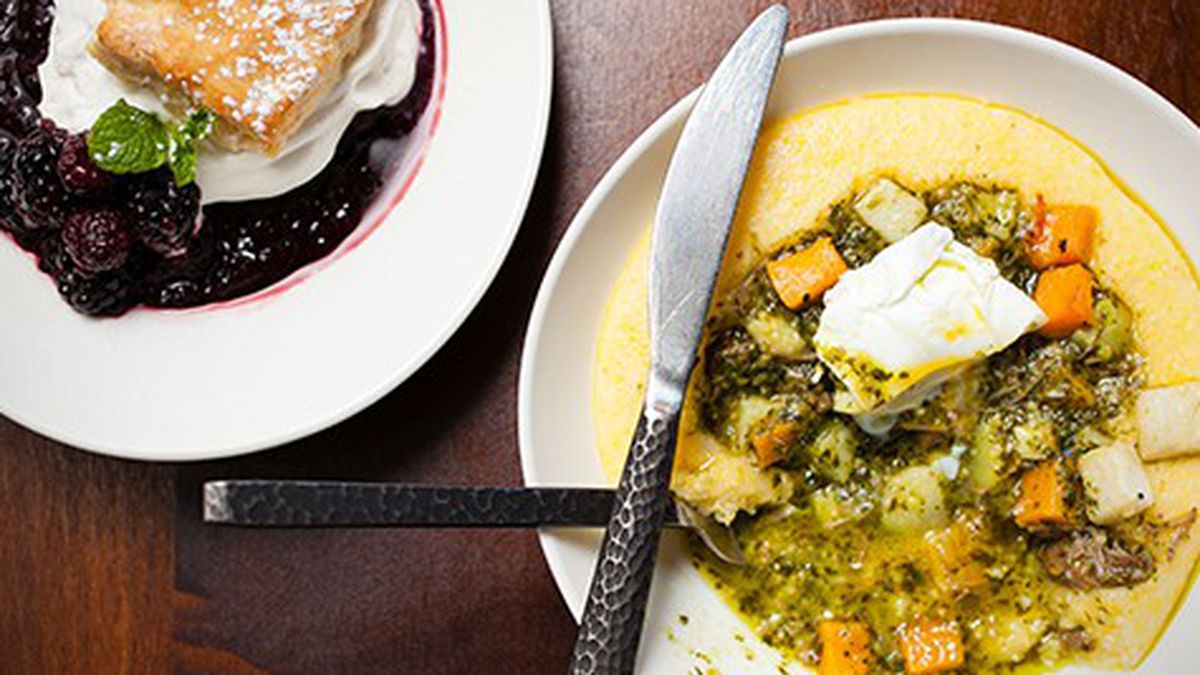 There’s a restaurant in San Francisco named after Dobbs Ferry, a not-so-famous village in New York’s Hudson Valley, and another — Tacko — that was conceived as a Nantucket-themed taqueria. I suppose there’s something of a tradition, then, of Bay Area chefs opening restaurants inspired by their faraway — and, to the average customer, perhaps somewhat obscure — hometowns.

You can add Cafe Eugene, a new Pacific Northwest-inspired restaurant in Albany, to the list. Ryan Murff and Jon Guhl — who also co-own Boss Burger, an excellent fast-food joint located two doors down — opened the restaurant two months ago in the old Little Star Pizza space. Little Star, which is also owned by Guhl, moved next door, so, all told, this one block of Solano Avenue now constitutes a mini-empire of American favorites — a kind of one-stop shop for your deep-dish pizza, your burgers, your clam chowder.

Amanda Joost Gehring, a former sous chef at Berkeley’s Cafe Rouge who admits to having “a bit of a Pacific Northwest crush,” heads up the kitchen. But it is Murff, a Eugene transplant, who has largely shaped the restaurant’s identity. Many of the dishes on the opening menu are based on family recipes and food he remembers eating when he was growing up in Oregon in the Eighties and Nineties.

If no one had bothered opening an Oregon-themed restaurant in the Bay Area prior to this, it might be because, well, at the end of the day, the food Murff grew up eating in Eugene has an awful lot in common with California cuisine. Cafe Eugene shares the same rustic farm-to-table aesthetic and honor-thy-ingredients cooking philosophy as dozens of other East Bay establishments, and even its homey, “Oregonian” decor — old, mismatched dining chairs and wood paneling like the kind you might find inside a fishing cabin — is very much in line with current Bay Area trends.

Put it this way: You could shoot Portlandia just as easily in, say, Temescal Alley as you can in Portland proper.

Murff pointed out that there are subtle culinary differences, in emphasis if not in essence. In part because of regional climate differences, Pacific Northwest cuisine tends to feature more cold-weather food (e.g., chowders and stews), and the prevalence of smoked fish points to both Scandinavian and Native American influences. The city of Eugene, in particular, has long had a Berkeley-esque, granola-hippie streak that manifests itself in a number of singular specialties — for instance, a vegan dip known as “tofu pâté.” (Cafe Eugene offers a house-made version.)

But the food at Cafe Eugene is mostly indistinguishable from what any number of Alice Waters disciples are cooking at restaurants around the Bay Area — with a little bit more seafood, perhaps. Take, for instance, the “Oregon toasts” appetizer, which were less some elusive regional delicacy than they were a slight variation on bruschetta: loosely “Oregon-style” ingredients piled onto slices of toasted Acme bread. In addition to that tofu spread (which I haven’t tried), topping options included a marinated mushroom and paddlefish caviar combo that was incredibly addictive — the briny undercurrent of the caviar accentuated by a thin coin of raw oyster mushroom (a less bougie stand-in for shaved truffle). Another version featured smoked salmon and cured trout roe, both tasty and both prepared in-house.

Likewise, the fact that there wasn’t anything particularly Pacific Northwest about a burrata and beet salad didn’t take anything away from its deliciousness. I loved the way the cheese spread on top like oozy, melted marshmallow, and the way the pickled beets offered a bright, intensely tangy counterpoint to bitter endive leaves and wholesome-tasting watercress sprouts. And the only Pacific Northwest connection in a Brussels sprout and cauliflower casserole was a Mornay sauce made with Oregon cheddar — and I found that sauce a bit too grainy to be enjoyable.

However you want to categorize Cafe Eugene, the East Bay could use another seafood-oriented farm-to-table spot, and that’s the realm where I think the restaurant really has an opportunity to shine. A bowl of steamed Prince Edward Island mussels featured absurdly plump mussels — the largest I’ve had in an East Bay restaurant this side of À Côté (though Murff said that might have been anomalous to the particular batch I was served). When shellfish is this good, you don’t need to do much. A simple pan broth made with cider, smoked pimentón butter, and slow-cooked fennel and onions — lightly pickled so that they resembled sauerkraut — commingled with the mussel juices to make the perfect dipping sauce.

If anything, the restaurant occasionally errs too far on the side of simplicity, resulting in a few seafood dishes that were underseasoned. I liked the idea behind a clam chowder topped with leaf-shaped wedges of puff pastry — a play on potpie. But the soup itself was strangely bland, despite the inclusion of an ample amount of cream and butter. It needed salt and, more than that, a much stronger dose of actual clam flavor. Meanwhile, the pan-fried steelhead trout fillet was exactly the kind of piece of fish I expect to be served at any self-respecting restaurant on the Oregon coast — perfectly tender flesh and impeccably crisp, well-seasoned skin. On the other hand, the butter beans and broccoli rabe that came with the fish were rather boring, even if they were cooked properly.

The best of the entrées I tried was a braised pork shoulder dish that drew its inspiration not from Portland or Eugene, but rather from an old Oaxacan recipe. The combination of lush, tender, slow-cooked pork, bright tomatillo-based chile verde-style sauce, and Cotija cheese-spiked grits (a play on Mexican tamales) was deeply comforting — like eating a bowl of savory porridge. Still, those looking for big, bold flavors might be mildly disappointed: I just wished a hot sauce had been offered on the side.

Even the booze list at Cafe Eugene isn’t as regionally specific as you might imagine. There are a handful of Oregon Pinots and craft beers, but not too many. Murff said he plans to add more after getting a little pushback from customers hoping for more Oregon hops.

On the other hand, a shortcake and marionberry sauce transported me right back to the last road trip I took up the Oregon coast, where it seemed like even the tiniest roadside shacks would feature some awesome berry-centric dessert. I loved the crisp, sugar-brushed edges of the biscuit-like shortcake, the generous dollop of yogurt-infused whipped cream, and, best of all, the pool of tart-sweet berry sauce — a taste of summer that Murff said recalled his childhood years, when his family would gather enough berries to freeze to last all the way through the winter months.

Here’s where I admit I may have screwed up: I’ve yet to try Cafe Eugene’s brunch service, which the restaurant had only just launched a week or two prior to my visits. As it turns out, brunch is going to be a real focal point of the business, so much so that starting this week Cafe Eugene is one of the only East Bay eateries I know of (diners and chain restaurants aside) that offers a full brunch menu every day — what Joost Gehring calls a “lazy all-day brunch.”

According to Murff, the brunch menu in particular leans heavily on memories of his childhood in Eugene: the specific kind of French toast his mother made, using baguettes cut into thick coins, and the pancakes she would make with yogurt, like so many brunch spots in Oregon do. For most customers, it’ll be nice just to be able to get those kinds of dishes on, say, a random Tuesday afternoon. For Murff and — he hopes — for the other Oregon transplants who visit the restaurant, maybe it will feel something like home.