Workers and community activists say the highly anticipated East Oakland grocery store is falling short on its labor commitments and has launched an aggressive anti-union campaign. 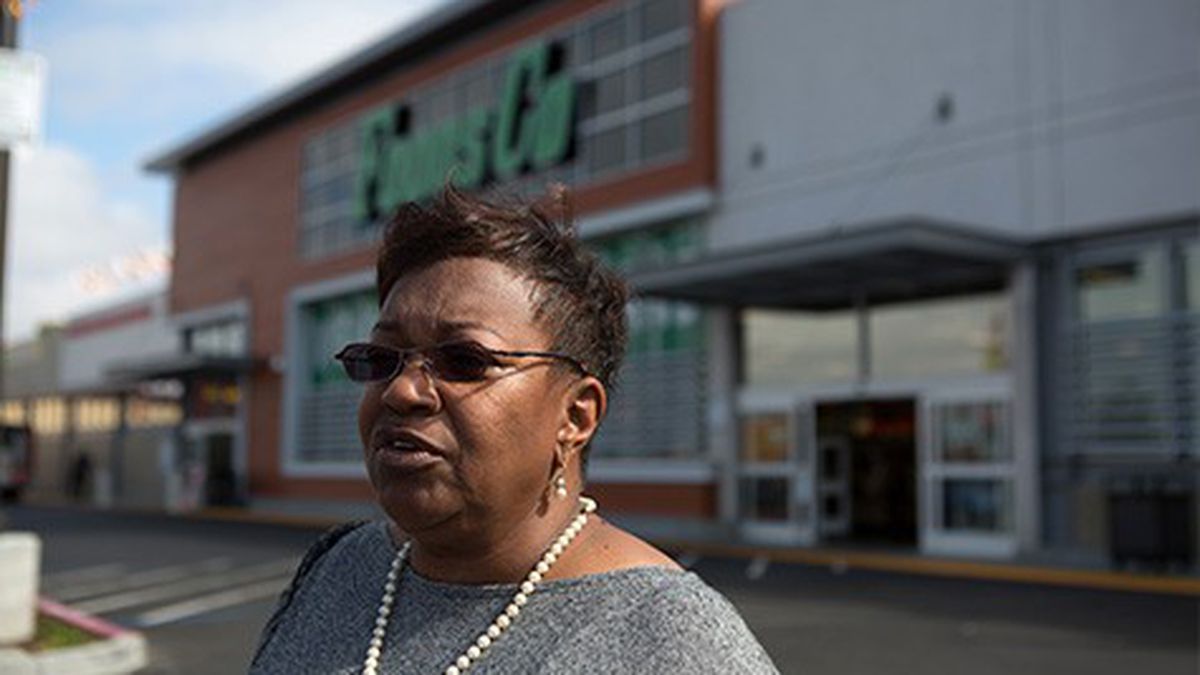 In March, the grocery chain Foods Co opened a new store in East Oakland in a neighborhood that had long lacked a convenient supermarket. At a ribbon-cutting ceremony at the 80,000-square-foot store, elected officials praised the company for bringing fresh, affordable produce and hundreds of jobs to the neighborhood.

But in the months since the grand opening celebration, store officials have taken a number of troubling steps that violate promises the company made when it moved in and reflect a management style that is unfriendly to low-wage workers, according to employees and labor activists. These include questionable layoffs and a failure to meet certain commitments the store made regarding wages and benefits.

Last month, store employees began organizing in an effort to join the United Food and Commercial Workers (UFCW) Local 5, a union that represents grocery and food-processing workers. Management, however, has responded by allegedly launching an aggressive anti-union campaign to discourage and intimidate workers from voting to join the union — a stance that workers said has only further exacerbated tensions at the supermarket.

“They’re trying to scare people,” said Avery Dollar, a 28-year-old cashier. “They are trying to put it into everybody’s head that the union is no good.”

The East Oakland supermarket — located at the Foothill Square Shopping Center on MacArthur Boulevard — is the city’s first outlet of Foods Co, which also has stores in Richmond, Pittsburg, and San Francisco. The chain is a subsidiary of Kroger, the largest grocery retailer in the country. Over the last month, the union has been collecting signatures from employees in East Oakland and now has “union authorization cards” from more than 50 percent of workers, according to Geraldo Dominguez, Local 5 organizing director.

With a majority of employees requesting union representation, UFCW delivered a letter to the store last week requesting a meeting to move forward with the process. If the company formally recognizes the union, contract negotiations will follow.

Neither the Oakland store manager of Foods Co nor a company spokesperson responded to requests for comment for this story. But the management’s communications with employees shed some light on the store’s resistance to the union. The Express obtained a copy of a flier that managers have been distributing to employees, which discourages them from signing cards and portrays the union’s efforts as misleading.

“Union representatives might tell you that signing the authorization card is not a big deal, but it is,” the flier states, adding, “If you are not sure that you want to belong to a union, don’t sign a card!” The flier also asserts that employees’ wages would decrease under a union contract — from $9.25 to $9.00 per hour for part-time cashiers and clerks, for example.

The flier further downplays Local 5’s ability to improve wages and working conditions for employees, stating, “The union can’t force the company to agree to their terms.” The document also warns employees about potential dues they would have to pay to UFCW: “Unions sometimes lead people to believe that dues help pay for your benefits. That is not true. Union dues pay the expenses of the union, including salaries, offices, cars, etc.”

Dominguez said the fliers were off-putting to workers, especially those familiar with the benefits that come with union representation. “Many of these workers feel offended,” he said. “They feel like they are being treated like children.”

He pointed out that the information about potential wage decreases under a union contract was misleading because wages would be determined through negotiations. He also argued that the handouts neglected to mention the important advantages that come with representation. These include contractual assurance that workers won’t be laid off without cause, he said. “These workers really need job security. They really believe they may not be here tomorrow.”

Fueling employee concerns about the potential for layoffs is the fact that the staff has already faced significant cuts since the store opened. According to the union and current employees, the store employed roughly 180 employees when it first opened, but now its staff is down to around 95. It’s unclear how many of those departures were layoffs, but employees said they have seen people let go for no reason.

One employee, whom the Express has agreed to not identify because he is worried about losing his job, said managers failed to properly train inexperienced workers as they said they would and then ultimately laid them off. “They were just thrown on the job and not given the tools that they need,” said the worker, who said he works full-time hours but is classified as part-time and does not receive benefits.

The store is now clearly understaffed, he said, noting that he regularly works overtime shifts. “It’s really outrageous to me. We have a lot of work to be done,” he said, adding that “the union will be able to set standards.”

A company press release in March said the store would bring “up to 175 jobs” to Oakland. “I was so excited, because so many people got jobs,” said Sheryl Walton, chair of the District 7 Block by Block Organizing Network, a neighborhood group. “They did this huge recruitment upfront. But now they’ve scaled it down and that does not send a good message.”

Another source of contention at the store is the fact that most employees are currently part-time workers and aren’t receiving benefits from the company, according to Dominguez and store employees. This violates the original commitments Foods Co made to community groups and employees, said Josie Camacho, executive secretary-treasurer of the Alameda Labor Council, an umbrella organization of local unions: “They promised to give them healthcare and that has not happened.”

The anti-union fliers also contradict the company’s pledge not to interfere with organizing — a commitment that Foods Co officials made at a Block by Block meeting last year, according to Walton. “They stated that they did not mind bringing the union here if the workers wanted it,” she said. “I’m extremely disappointed.”

Walton and Camacho, along with a number of other community organizers, delivered a letter to the store last week, requesting that managers stop interfering with employee organizing and fulfill its original promises.

Foods Co’s attempts to block the union have extended beyond the fliers, workers said. The company has brought in managers from some of the chain’s non-union stores to talk one-on-one with employees in an effort to dissuade them from signing cards. And employees said that numerous East Oakland managers have been approaching workers, asking them if they’ve signed cards.

Camacho noted that employers are supposed to remain neutral during this process. “You let the workers decide for themselves if they want to form a union,” she said, adding that, because of the managers’ questions, “people that had signed cards are now scared.”

Another employee I talked to, who also asked to remain anonymous for fear of retaliation, said four different managers have tried to discourage him from supporting the union, including one who warned him that he might be less likely to receive a promotion if the store became a union shop. “It’s really getting messy,” said the employee, an East Oakland resident who said he is also working full-time hours despite his part-time status. “It’s really getting hard to work. Everybody’s stressed about this.”

Dollar, an East Oakland resident and single mother, said a manager asked her whether she signed a union card and tried to convince her it was a bad idea. “They aren’t explaining the whole story,” she said, adding that she supports the push to unionize because labor representatives can negotiate a contract that provides legitimate job security for employees. “I have a household to take care of all by myself,” she said, noting that she was unemployed for two years before getting hired at Foods Co. “Losing this job is not an option.”

Dollar currently works part-time and makes $9.25 an hour, but said that under a union contract she hopes she can get higher wages and a full-time position, given her extensive retail experience and the seniority rules that could be included in a union contract.

Dominguez said that Foods Co representatives recently contacted the union to say that the store respects workers’ rights to organize. But, he added, Local 5 is still waiting on an official response from the store recognizing the union and the majority support.

In the meantime, Reverend Daniel Buford from the Allen Temple Baptist Church in East Oakland said that numerous employees have expressed concerns to him about possible retaliation and layoffs. Many, he noted, are in vulnerable positions and are afraid of publicly supporting the union.

“These people have been chronically unemployed,” said Buford, who is director of the Prophetic Justice Ministry, the church’s social justice arm, and who helped organize job fairs that connected Foods Co to local residents. “If you haven’t had money coming in, you’re not going to become some union organizer and jeopardize the only income you have.”

And many store employees are still struggling to make ends meet with the low wages they are receiving, said Phyllis Scott, a pastor at the nearby Tree of Life Empowerment Ministries church. “Some of them have to work two jobs, because the money they are making isn’t enough,” she said. “They are guests in our community and we need to hold them accountable.”