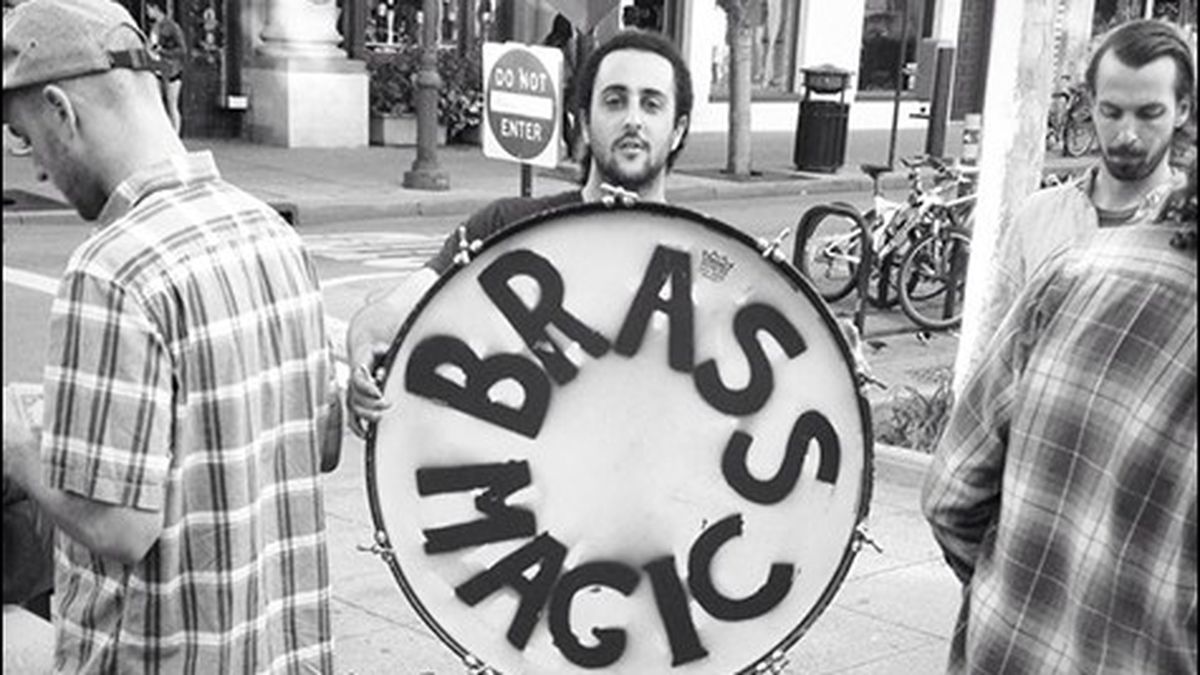 At a recent performance of Brass Magic during its Tuesday-night residency at Madrone Art Bar in San Francisco, about fifteen people out of a crowd of sixty were dancing particularly enthusiastically — and by that I mean in a hands-up, all-limbs-moving, unencumbered kind of way. Brass Magic doesn’t make toe-tapping music: It makes life-affirming, groovy party music.

Every week for the past six months, the musicians of Brass Magic have been playing their original, genre-defying music to a growing crowd of fans. Their residency at Madrone has helped them hone in and tighten their sound.

The four core members of Brass Magic — Danny Lubin-Laden on sousaphone, Raffi Garabedian on tenor sax, Joe Heartnett on alto sax, and Adam Starkopf on drums — met while studying jazz at The New School in New York City. In college, the friends sought out live music from all corners of New York’s diverse scene. At a bar and performance space called Barbés in Brooklyn, they were transfixed by a brass band called Slavic Soul Party, which played there every Tuesday. Lubin-Laden said they also saw another brass band called Hypnotic Brass Ensemble amass crowds of more than one hundred people in the subway after playing just one song. They were inspired by the ability of these brass bands to get people to dance and rally around them.

Garabedian concurred: “The energy from the brass bands we would see was really raw and organic, and it affected everyone …. The music has such a direct way of connecting with people.”

Although the four members played together in college in a variety of different lineups, Brass Magic didn’t form until a few years ago, when Lubin-Laden started writing songs for a brass band. All four musicians have an abiding love of jazz, but Lubin-Laden was also interested in playing for a dancing crowd. “There were a lot of times when we were performing in jazz settings, and everyone in the crowd would be over fifty.” He wanted to engage people of his own generation, while staying true to his jazz roots.

Lubin-Laden wrote all of the songs on the band’s first EP, which was recorded last fall in New York City. All of the tracks are instrumental, save for a fantastic cover of the rollicking Animal Collective song “Peacebone.”

“One thing that’s really challenging about starting to play brass band music is that you’re coming up against all these other bands and so many great traditions within the music,” said Lubin-Laden. “There are brass bands all over the world — it’s one of the most common formations, it’s marching music. What we spent a lot of time doing, and are still doing, is [figuring out] how to take in all of that music, but create a sound that is more unique to us.” As far as Lubin-Laden is concerned, Brass Magic isn’t a brass band at all. He thinks of the group more as a horn dance band. “But when I tell people that, they’re like, ‘What?'”

Starkopf, the band’s drummer, said that at some of their initial shows in New York City, they had up to fourteen guys on stage, and sometimes they were unsure exactly how many performers were going to show up to a gig.

But Lubin-Laden clarified that Brass Magic isn’t improvisational. “All of this music has a very large compositional element,” he said. “It’s not as if you can jump in the band and start jamming away. This is music we rehearse the shit out of.” The music is written in a way that’s physically exhausting to play, he explained. “Everything is thought-out. You can’t just hang out at a gig.”

As inspiring as the brass band music scene in New York was, however, it was also competitive. And last year, new regulations placed stricter limits on street performers. Moving to the East Bay, where they were sure their happy music would resonate with people, was starting to look more and more attractive. (Lubin-Laden and Garabedian were raised in Berkeley.)

Still, the members of Brass Magic credit New York with shaping their sound. “The music wouldn’t be what it is today if we hadn’t been in New York,” Garabedian said. Lubin-Laden chimed in: “It just happens to work wonderfully over here. And as a busking band — a band that is interested in playing on the street — weather-wise, it’s much better!”

After moving to the East Bay, the band started busking two to three times a week in San Francisco. After playing just once at Madrone, the owner offered them a weekly gig.

“We were ecstatic. We had never gotten an offer like that from a bar in New York City,” said Lubin-Laden. “It’s rare out here, but it’s even more rare out there.”

These days, the band rehearses weekly, constantly writes new songs so its sets at Madrone don’t get stale, and tries to busk on San Francisco’s Embarcadero at least once a week. The decision to move from New York City to the Bay Area seems to have paid off: Lubin-Laden said the band is now offered more opportunities to perform than it can actually take on. For the last few months, Brass Magic has also had a residency every fourth Friday at Oakland’s Cafe Van Kleef. Meanwhile, the band is planning on releasing another EP later this summer in addition to performing at the occasional festival. But its primary focus remains on building up a larger following.

The biggest challenge the four face right now is solidifying their lineup. “It’s really hard,” Starkopf said. “We’re not looking for musicians who know how to play drums, guitar, or bass.” There are far fewer people, he said, who are not only strong brass musicians, but who are also able to commit to regular gigs. At Madrone, the group usually has between six to eight performers. With Starkopf on drums and Lubin-Laden on sousaphone, the rest of the musicians form a long line in front of them, so close to the crowd it feels as though they’re in it.

While there are certainly other brass bands that perform often in the Bay Area, none are doing quite what Brass Magic is — or doing so as fervently. At Madrone, the band plays two sets: one at 10 p.m. and another at 11:30 p.m., the latter of which sometimes lasts up to two hours. After the guys’ first set, sweat dripped down their faces. The same was true for those enthusiastic dancers.