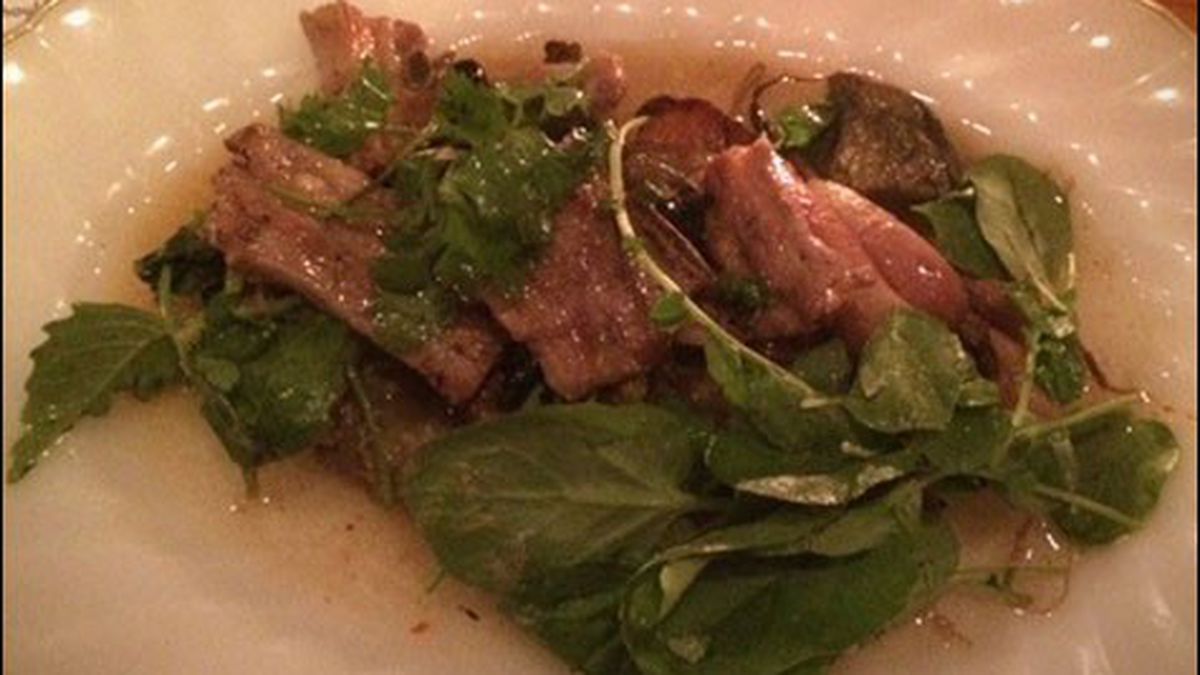 The best pop-up of the year. Plus, Shattuck Down Low's owner is opening a new bar.

The best pop-up I’ve been to this year was in the back of a wine shop, in which a trucker-hat-wearing dude set me up with a glass of righteous Syrah, and I feasted on lamb cooked two ways — as good as any fine-dining lamb I’ve eaten lately, except it was cooked on a makeshift induction-burner setup and only set me back $18.

That’s Bistro Ordinaire in a nutshell. Chris Kronner’s twice-a-week French bistro has popped up at the Oakland wine shop/wine bar Ordinaire (3354 Grand Ave.) nearly every Thursday and Friday night for the past five months. Like all great pop-ups, Bistro Ordinaire has a rollicking, off-the-cuff feel — more like you’re hanging out at a particularly festive dinner party than dining at a formal restaurant. The night I swung by, I placed my order at the bar and walked up a flight of steps to the upstairs mezzanine, where there was a big communal table and handful of two-tops — all cobbled-together furniture that looked like castoffs from a local elementary school. Old chandeliers and a veritable fire hazard’s worth of votive candles provided a touch of romance.

What I loved was the casual vibe and how mixed the crowd was — tech start-up types, middle-aged oenophiles, attractive young couples on dates. (A quick shout-out to Ordinaire owner Bradford Taylor, who’s doing God’s work in helping dispense with the notion that wine shops are all stuffy, intimidating places frequented only by the rich.)

These days, Kronner is best known as a burger guy — his forthcoming burger-focused Oakland restaurant, KronnerBurger, is slated to open on Piedmont Avenue in the old J’s Mexican and American Food spot sometime this fall. But the food at Bistro Ordinaire is closer to what Kronner cooked at San Francisco’s Bar Tartine — riffs on the kind of simple food you’d find at a little Parisian bistro.

The main entrée was a hunk of lamb shoulder, slow-roasted until it was lush and decadent, and lamb ribs that had been thinly cross-cut (like Korean kalbi) and quickly seared in a pan. Also on the plate: juicy butter-braised French Breakfast radishes, roasted eggplant purée, and cured olives that added a nice briny note. Dessert was a tender nectarine almond cake any French bistro would be proud to serve.

Since he first launched KronnerBurger a year and a half ago (first at the Mission district nightclub Bruno’s), Kronner has been in permanent pop-up mode, and he’s pretty much mastered the genre at this point. He’s doing all of this on two induction burners and a small tabletop oven, with no one helping him in the kitchen and just a few Ordinaire employees to function as all-purpose runners/bussers/cashiers, so it’s exciting to think about the food he’ll be able to put out once he has a wood hearth and a full kitchen staff.

Pop-ups, by their nature, are ephemeral, but Bistro Ordinaire should continue through the end of August. The good news is that Kronner plans to serve many of the dishes that he’s been testing out once his restaurant opens.

Downtown Oakland’s influx of shiny new watering holes continues apace with the arrival of Old Major’s (135 12th St.), a massive, 6,000-square-foot bar that’s coming to the old Oasis Restaurant and Bar space. Co-owners (and brothers) Daniel and Benjamin Cukierman have gutted the building and have ambitious construction plans that include the installation of nine-foot-high sliding glass doors and a rooftop deck. The bar is tentatively slated to open in late November.

Two years ago, Daniel Cukierman’s dance club, the Shattuck Down Low, was unceremoniously booted from its downtown Berkeley digs. Fans of the Down Low have long waited for news of where the venue might pop up next, but Cukierman stressed that this will be a completely separate business. There might be a DJ on hand occasionally to spin some tunes, but Old Major’s won’t be a club: There won’t be any dance floor. Instead, this will be your standard beer-and-cocktail bar, with about forty brews on tap and a full selection of cocktails.

But the project is ambitious in its own right. The brothers plan to erect a new single-story building that will be surrounded by sliding-glass doors and topped with the aforementioned rooftop deck — a 2,000-square-foot area for bar patrons to mingle under the stars.

The name, Old Major’s, is an allusion to the revolution-minded pig from Animal Farm. Cukierman, who is also a co-owner of the Grand Avenue spot Room 389, said he wanted a name that would go with the rustic farm theme that will inform the bar’s decor (e.g., lots of reclaimed barn wood). But he also liked that the name was “a little heavy.”

“I want [the bar] to be a place where people can come together, have a few beers, philosophize, and talk about stuff,” Cukierman explained.