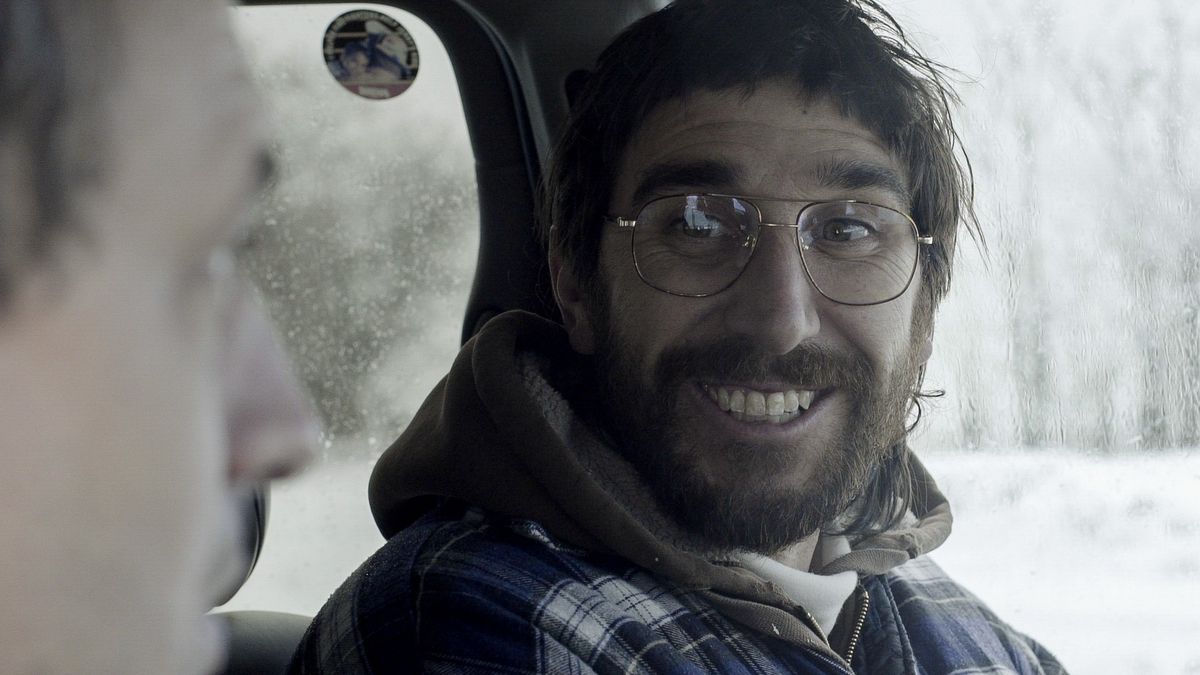 Peter Latang is established as a loser from the moment we see him. As he stumbles from a taxi into a snowy Rhode Island street, he tells the driver he’s lost his wallet and can’t pay for the ride. His problems don’t stop there. Stammering Peter (Jesse Wakeman), reluctantly revisiting his old hometown to sell his late grandmother’s house, is so preoccupied he can’t seem to carry on a conversation with the pretty, chatty real estate agent. Furthermore, the grandmother’s car won’t start, so he’s stranded.

But in Donald Cried, Peter is far from the most challenged character. Across the street he spies his childhood best friend Donald (played by the filmmaker, Kris Avedisian), in his bathrobe, throwing out the trash. If Peter is peeved and discombobulated, Donald is just plain unhinged, a certified man-child with a pre-teen boy’s bedroom (wrestling posters, KISS dolls, etc.), a job as a gofer in a bowling alley, and issues, many issues. Donald is overjoyed to see his best friend again and can’t stop babbling, obviously hung up on Peter. Peter, in turn, commandeers Donald’s car, hits him up for money, and they drive around running errands in one of those indie-style “twisted buddy” scenarios that show up now and then, like dandelions.

We’ve seen all too many “arrested development” movies like this, but the lanky, unkempt Avedisian, who directs from a screenplay he devised with Kyle Espeleta and actor Wakeman, has a definite knack for portraying a type everyone recognizes – the guy going nowhere, who will never, ever do much more than get out of bed in the morning. When a character like this fastens on a childhood best friend such as Peter, the story is almost required to take a turn into dark, deep waters at some point, usually around the issue of unresolved childhood sexual dependency (“Do you masturbate still?”), among other buried bugaboos.

At that point the story can either become comic or dire. Donald and Peter manage to walk that line with a certain flair – if we can use that word to describe the disorganized efforts of a pair of fools to relive their unremarkable lower-middle-class wonder years. Avedisian and Wakefield turn what might have been an uncomfortably trivial character study, with improv-worthy dialogue and squirm-inducing situations, into a different type of trivia, in which we watch a couple of actors going through their paces and can admire their efforts.

Their tour of Avedisian’s real-life hometown of Warwick, Rhode Island is a series of awkward, often bizarre encounters: the bowling alley and Donald’s manic boss (coincidentally, his mother’s boyfriend); a rough game of touch football with some dope dealers; cleaning out grandma’s room at the nursing home and scattering her ashes; visiting Donald’s man cave in a deserted railroad tunnel, etc. Wakeman’s flea-on-a-burner performance is convincingly irritating. Avedisian’s Donald turns out to be the straight man, pitiably so. We meet the real estate agent (Louisa Krause) again, disastrously. And Donald’s mom, who loves him no matter what. But our feelings for Donald Cried are strictly conditional. It’s a film for genre students only.