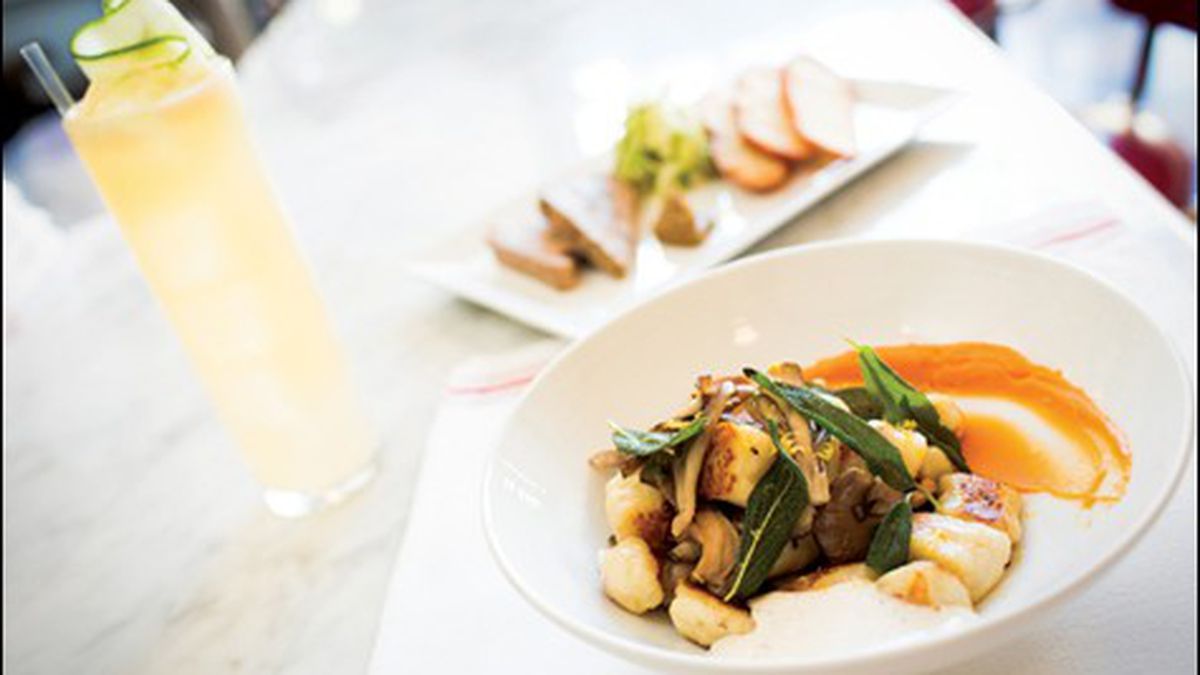 Tis the season for self-reflection, good will toward men, and the compiling of top-ten lists. Here in the East Bay, this was the year of the gastropub — bars serving bone marrow and house-cured charcuterie, leaving many traditional restaurants in the dust — and high-end sandwich shops and food truck “pods.” It was the year of artisan doughnuts and bagels (so many tasty round, doughy things), and the refined comforts of the Japanese izakaya. I ate plenty of delicious items in 2012 — Rio California’s soulful feijoada; FiveTenBurger’s simple, flawless burger; and Kang Tong Degi’s sublimely comforting budae jjigae — but for this list I limited it to new dishes.

Given those parameters, here are my ten best bites of the year, presented in no particular order:

Where chef Kim Alter excels is in her wild, modernist riffs on comfort food classics. Perhaps the best example: Ever since Haven opened (almost exactly one year ago), Alter has been serving a kind of deconstructed shepherd’s pie during the winter months. The version I ate entirely left out the pub classic’s two primary ingredients — lamb and mashed potatoes — and instead substituted ground pork butt, crispy fried fingerling potatoes, and a white potato foam. It was like no other shepherd’s pie I’d eaten — better, I think, because it was lighter and less starchy, without sacrificing the dish’s soulful, comforting elements.

The most wildly inventive of the East Bay’s trio of new top-notch izakayas (along with B-Dama and Ippuku), Kiraku serves up a panoply of out-of-the-ordinary dishes featuring obscure ingredients (at least to the typical Western diner) and unlikely flavor combinations: fermented firefly squid, shark’s soft bone, stewed daikon radish topped (before the ban) with foie gras. Still, the most memorable dish I ate at Kiraku was deceptively simple: sweet corn kernels that were tempura-fried until they formed crunchy little fritters, then sprinkled with green tea salt for just a hint of intrigue.

If you eat out in Oakland with any regularity, you likely already know that the most satisfying dishes often aren’t found at fancy, $25-an-entrée temples of gastronomy. Like Kreayshawn said, “We don’t eat that shit in Oakland. … We eat out the taco truck in Oakland.” Or, if not the taco truck, then the workmanlike Mexican joint that serves some the best carnitas you’ll find outside of Michoacán proper: pork shoulder roasted in the oven until it’s crisp-edged but still gloriously fatty and tender. Served with guacamole and thick, piping-hot corn tortillas, it’s pretty much the perfect meal.

Continuing on the roasted-pork theme, at Cafe Q, chef Jesse Branstetter submerges boneless pork butt in rendered bacon fat and roasts it — low and slow, as they say in the trade — until you’re left with something that’s not barbecue (as the “pulled pork” designation might imply) but has that sublime combination of crisp, tender, unctuous, and smoky that makes pork the king of meats. Shred that meat and put it on a burger bun, topped simply with avocado slices and a light cabbage slaw, and you’ve got a sandwich that’ll blow minds.

As a fish best known for being boring and, well, not really tasting like fish, the tilapia doesn’t get a lot of love from chefs or food writers. But at Soleil’s African Cuisine, the unheralded fish is the star in the restaurant’s signature dish of Tanzanian fish: A perfectly grilled tilapia fillet serves as the blank canvas for a mellow, lick-your-plate-worthy sauce made from coconut milk, spinach, puréed tomatoes, and sundry African spice. Add some fried plantains, a mound of fragrant jollof rice, and a dash of the house-made piri piri hot sauce, and you have a plate of food fit for even the most persnickety (or fish-snobby) of eaters.

Fans of Jiro Dreams of Sushi (maybe the food-porniest of all food-porn films) should note that in the East Bay, the closest you can come to that kind of sushi-as-religious-experience is at a tiny El Cerrito sushi bar, where the long waits are totally worth it. Given that the best sushi meals are like a well-orchestrated symphony, it’s hard to highlight a single best dish. Was it the grilled-to-order unagi; the lush cold-smoked salmon; or the smooth, impossibly thick tamago (egg omelet)? In the end, my vote goes to the mentaiko (salted cod roe): The fishiest item in a restaurant full of fish, this nigiri is like the essence of the sea itself condensed into a single briny bite.

Here’s what I think about when I think about fall: fried sage leaves (delicate and deeply earthy), roasted Japanese sweet potatoes, browned butter, and meaty wild mushrooms (oyster, shiitake, Hen of the Woods) that are sautéed until they’re intoxicatingly aromatic. Put all of those elements on a plate, and you’ll have Hopscotch’s sweet potato gnocchi — comfort food for a chilly evening, and a perfect example of chef Kyle Itani’s understated, California-inflected take on Asian fusion cuisine.

Having already written some 10,000 words about the Bay Area’s bagel renaissance, I’ll keep this brief: Of the new crop of artisan bagels in the East Bay (all of which have their charms), Baron Baking’s crisp, well-blistered specimens are the best. And the best way to eat one is by ordering the bagel platter at Stag’s Lunchette. Served open-faced and topped with scallion cream cheese, house-smoked trout, and capers, it’s about as close to the platonic ideal of a bagel sandwich as you’ll ever find.

Things are made a hundred times better by the addition of crispy fried chicken skin: fried chicken (duh), any kind of taco, and just about any dish where you’d normally use plain old bacon. Thanks to Oakland’s newly opened Grand Lake Kitchen, you can add egg salad to that list. The “Oyako” is an open-faced sandwich: a generous portion of super-moist, mayo-heavy egg salad served on top of thick slices of toasted rye. It would be delicious even unadorned, but the shards of crispy, smoky, chicken skin sprinkled on top launches the sandwich into another stratosphere altogether.

What better way to finish a meal — or a top-ten list — than with pie? Especially if that pie is as good as the creations PieTisserie’s Jaynelle St. Jean serves from her old-fashioned pie window inside Nido (a Mexican restaurant). Eating St. Jean’s single-serving chocolate peppermint cream mini pie (a holiday special, also available as a regular-sized pie) is like taking a bite into Christmas itself: The smooth, scratch-made peppermint-infused chocolate cream tastes like a grown-up, not-too-sweet version of an Andes mint. Best of all, the flakey all-butter crust is as delicate and shatteringly crisp as any I’ve ever had. San Franciscans trolling on this side of the bay, take note: The pie reminded me of no less a pastry than Tartine Bakery’s legendarily drool-worthy cream tarts — except quite a bit better.