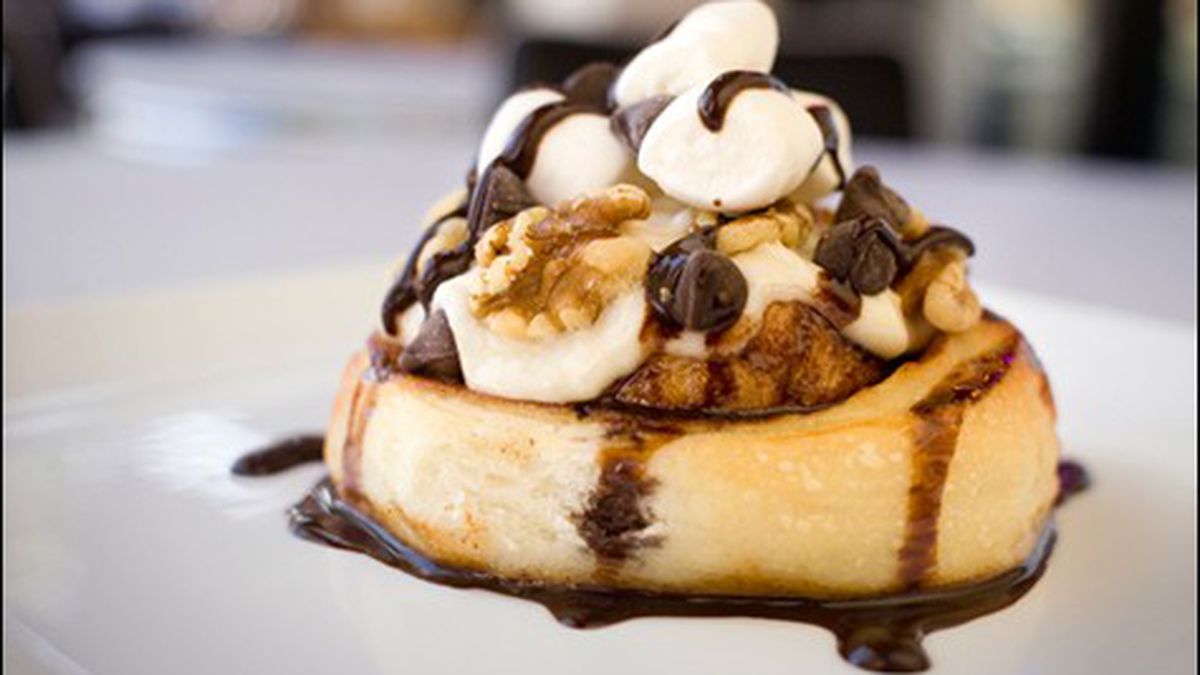 Cinnamon rolls might be not only the ultimate comfort food, but the ultimate American comfort food, embodying some of those qualities that Glenn Beck admires. Mildly sweet, they bear a spicy, once-foreign-but-now-familiar heat. Soft, they’re saved from insubstantiality by being chewy, as if to say: I’m no donut. You can’t handle me without a knife. And, resolutely, they are spirals — drawing you in, coil by coil, like an inspiring story or a church maze or a Don’t Tread on Me snake.

Shannon and Florian Radke‘s brand-new bakery across Oxford Street from UC Berkeley’s western flank is putting a new spin on those spirals, launching them futureward. This is clear from its fun, rehab-riffing name — Cinnaholic — and from its black-and-white decor and retro rolling-pins-and-robins logo. Futuristic, too, is the fact that rolls here start at $4.25. But that’s tied to yet another futuristic fact: Crowned with your choice of 26 different frostings (from Key lime to caramel to root beer) and 25 toppings (from peaches to peanut butter to cookie-dough chunks), they’re 100 percent vegan.

The Radkes met in late 2008 through the travel/scavenging web site CouchSurfing.com: With some fellow Germans, Florian was touring California. Shannon offered them a San Francisco tour. She’d been a “little high school animal-rights activist” while growing up in Concord. He worked for PETA. Match made in heaven. Deciding to shun animal products entirely, as Florian did, Shannon thought, “Oh, man, now I’m vegan. How am I going to convert all these recipes?” When yeast wouldn’t perform properly in Shannon’s vegan cinnamon rolls, her friends at EthicalPizza.com helped her develop a recipe rich in soy substitutes for milk and butter and employing pizza-dough techniques. Relatives were so impressed with the results that they helped the pair set up shop.

Frostings and toppings are mix-‘n’-match and assembled to order. For the indecisive, eight pre-designed but assembled to order “specialty rolls” include S’Mores, a sundae-like indulgence comprising a meal-size cinnamon roll swimming in chocolate sauce, semisweet chocolate chips, and those chewy rare jewels, vegan marshmallows. Another is Fudge Brownie Chunk, topped with rich bits of the baked-fresh-daily brownies that, along with coffee, are Cinnaholic’s only other fare.

They’re sweet — depending on your outlook either rhapsodically or can’t-eat-this-in-one-sitting sweet. If they’re expensive, it’s because being 100 percent vegan is expensive, requiring rare ingredients such as sugar that wasn’t manufactured with “bone char,” a substance made from superheated animal bones and used to process standard sugar.

It’s a breathtaking makeover for a stretch of sidewalk that has long housed an ever-changing array of short-lived businesses. Ben & Jerry’s fled, this summer, to another space around the corner. Punjabi by Nature has managed to survive for six years — maybe because its half-meatless buffet is so fresh, including naan delivered to your table piping-hot, and because it costs only $7.99 at lunch and dinner and even on weekends: a rare feat for Indian buffets. Otherwise, the block has seemed curiously cursed.

For as long as anyone can remember, UC Berkeley’s “neighborhoods” — those spillover streets where students shop and eat — have been limited to two: Telegraph Avenue and its tiny somnolent twin, Euclid Avenue. Although Oxford Street stands between campus and downtown and thus should act as a sort of dining/retail baleen, it never has. Cal always had its Southside and its Northside, but never had a Westside — until now.

At Ironwood BBQ, the Memphis-style dry rubs that Marcele Kutkauskaite uses in her two-day smoking process deliver a darkly smoky, spicy sweetness that is the culinary version of a slap on the back: complex in the way that slaps on the back are complex, part greeting and part challenge, bliss that stings.

Kutkauskaite and her mother are from Lithuania; her stepfather spent many years in the American South. The three blended their skills and traditions to create sincere, satisfying meals — first at their restaurant in San Francisco’s Golden Gate Park and now here. Using a custom-built Wham Turbo BBQ Pit, one of only three on the West Coast, Kutkauskaite slowly smokes fresh beef brisket, pork roast, ribs, and chicken acquired from Bassian Farms, a provider of hormone- and antibiotic-free meat raised on small local ranches. Anchor Steam-spiked sauce amps up the dry rub.

Side dishes meet the down-home richness of these meats — and of a hefty, homey, hickory-smoked-tofu “veggie-Q” sandwich: mellow, brisket-spiked baked beans; creamy-peppery-garlicky scalloped potatoes that take four hours to prepare (“It’s a Lithuanian trait to do potatoes very well,” Kutkauskaite said); and cranberry-studded coleslaw sliced so thinly that it dances on the tongue like lace.

As Cal’s newest “neighborhood,” Westside has style: decisive, dare-to-dis-me cool, like the living rooms of folks you wish you knew. Cinnaholic’s stratospheric, jet-black ceiling and Ironwood’s open, white-tile kitchen prove that serving a mainly student clientele does not mandate a condescending Taco Bell decor. (In what seems to be part of a growing trend, neither Cinnaholic nor Ironwood have indoor tables, although Ironwood has counters.) Also making these next-door neighbors endearing is the fact that both outfits are family-owned — and love is a powerful not-so-secret ingredient.