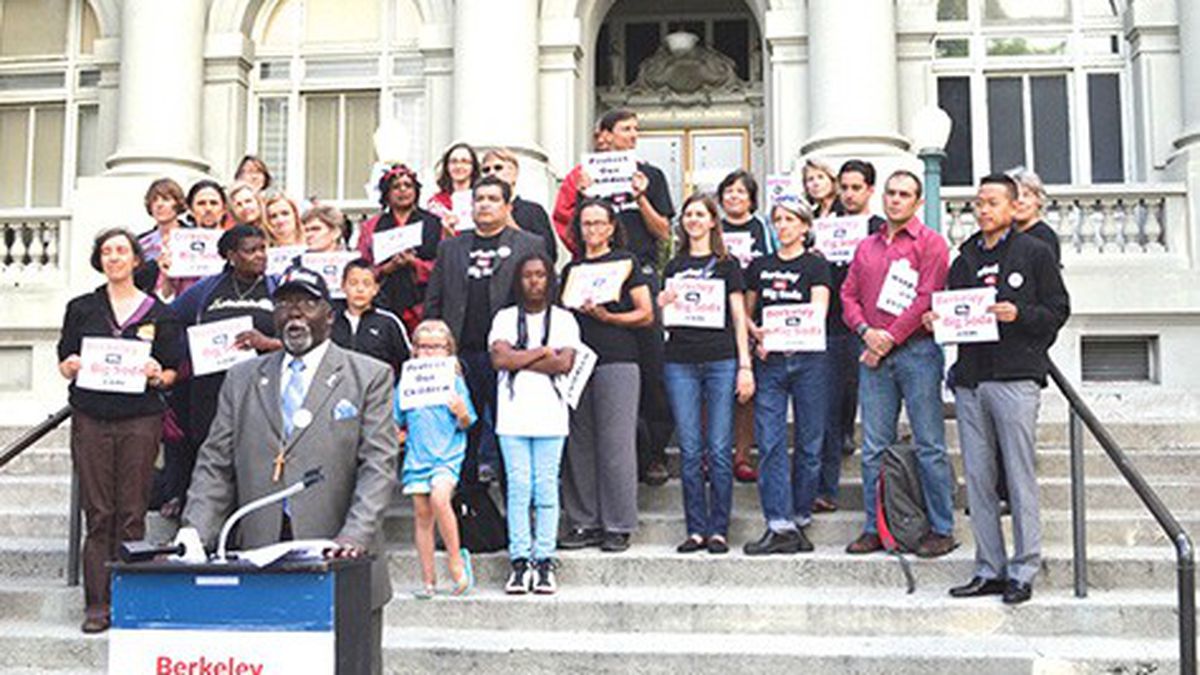 Berkeley’s Measure D, which would create a tax on sweetened beverages, has generated a bitter exchange of charges and counter-charges. Advocates for the tax contend that opponents are spreading misinformation about the measure through a sophisticated campaign being directed from outside Berkeley and lavishly funded by the American Beverage Association. Opponents argue that the real goal of the measure is not improving public health, as advocates claim, but putting more money into the hands of the city council.

The soda tax campaign grew out of a community effort to save school and community gardening and nutrition programs when the federal government slashed funding to them in 2012. Parents, teachers, health organizations, and social-justice advocates formed the Berkeley Healthy Child Coalition and came up with the idea of charging distributors a penny an ounce on beverages sweetened with sugar. The tax, explained campaign manager Sara Soka, would not only raise money for children’s health and nutrition programs, but also discourage kids from buying beverages that harm their health.

However, supporters of the proposed tax then realized that a ballot measure directing funds to specific programs requires a two-thirds vote to pass. By contrast, if the tax revenue goes into the city’s general fund, the measure would be able to pass with only a simple majority. For that reason the Berkeley City Council, which unanimously endorsed the measure, chose to make Measure D a general tax that does not include any specific promises on expenditures; instead, the measure mandates “a commission of experts [on child health and nutrition] to do an audit every year and make recommendations to the council [on how to spend proceeds from the tax],” said campaign volunteer Pam Gray, former aide to Councilmember Laurie Capitelli, who led the city council push for the soda tax.

Gray added that the “commission of experts” process is well established in Berkeley. She formerly served on a similar commission, the Children, Youth and Recreation Commission, and said that “the process of … allocating the funds is very thorough.” Gray also said the city council has never rejected the commission’s recommendations.

The fact that proceeds would go into the general fund, however, has been the main focus of the No on D campaign. A No on D “Frequently Asked Questions” flyer for example, asks: “Is it true Measure D is not about making us healthier; it’s just about raising more money for the city?” and then answers, “That’s true … Berkeley lawmakers just want the tax money for the general fund so they can spend it however they choose.” No on D spokesperson Roger Salazar said that because proceeds would go into the city’s general fund, “there’s no accountability — nothing in this measure that says the money has to go to health and nutrition programs.”

Dr. Jeff Ritterman, who led the unsuccessful push for a soda tax in Richmond in 2012, said the American Beverage Association (ABA) used the same strategy there. He argued that Big Soda has decided to emphasize the spending issue because “they’ve conceded on the science. The medical literature is not mixed. It’s very clear: Sugar-sweetened beverages are associated with higher rates of diabetes, obesity, heart disease, and strokes.”

And rates of diabetes in particular are rising, especially among teenagers. Research published in the May 2012 issue of Pediatrics found that “the percentage of teenagers testing positive for diabetes and prediabetes had nearly tripled to 23 percent in 2007-8 from 9 percent in 1999-2000,” according to a report in The New York Times. Adolescents are the largest consumers of sugar-sweetened beverages, according to a 2013 report by the UCLA Center for Health Policy Research. And the amount is rising among African-American, Asian American, and Latino teens in California.

Diabetes rates are higher for people of color of all ages, according to the 2013 Berkeley Health Status Report. And the trends are ominous. “In the Latino and African-American communities, half the children born since the year 2000 are expected to get diabetes in their lifetime,” said Berkeley Public School parent Xavier Morales, executive director of the Latino Coalition for a Healthy California. (The estimate for the population as a whole is more than one-third).

The campaign against soda tax is lavishly funded by the ABA, which donated $500,000 to No on D in September. It was “the largest single campaign contribution in the history … of Berkeley,” according to a Yes on D statement, and brought the ABA total contribution to No on D to $800,000. In 2012, large beverage companies spent $2.6 million to defeat the soda tax proposal in Richmond. “It is totally outrageous to distort our democratic process with this kind of money,” said Martin Bourque, executive director of the Ecology Center.

Advocates of the soda tax point to widespread support in Berkeley — early polls showed almost two-thirds of voters in favor. Endorsers include more than two dozen local organizations, including the NAACP, the Alameda-Contra Costa Medical Association, and the Berkeley Federation of Teachers, along with city council and school board members and local representatives to the state legislature. By contrast, said Bourque, “Big Soda doesn’t have any local community support so they are flooding Berkeley with a tsunami of marketing.”

The local organizer for No on D, Leon Cain, works for Rodriguez Strategies, the Los Angeles consulting company that’s directing the campaign. It lists the ABA as a major client on its website. According to Cain’s tweets on Twitter, he moved from Southern California to the Bay Area in July 2013, and seems to have moved to Berkeley recently. He told Soka at a meeting last February that he lived in San Francisco. Cain registered to vote in Berkeley on August 4.

When I contacted Cain and requested an interview, he referred me to Salazar, the Sacramento-based campaign spokesperson. When I asked Salazar repeatedly to provide the names of Berkeley residents active in the No on D campaign, he did not produce any, although he claimed that “more than one hundred business owners and some individuals” have signed on. However, when Capitelli debated the measure at the Berkeley Chamber of Commerce and the Democratic Club, campaign strategist Matt Rodriguez flew up from Los Angeles to argue the opposition.

Measure D volunteer Gray said ABA funds have paid for “sophisticated, professional PR and research organizations” that have conducted focus groups and polling, sent out mailings, and paid door-to-door canvassers. She and several others who participated in the opposition’s polls and focus groups said the information they received was misleading. Gray said she received two phone calls in July from pollsters whose biased questions convinced her they were working for the “No” campaign.

More recently Robert Reich, UC Berkeley professor and former US Secretary of Labor, reported in a Huffington Post article about a call he received from the No on D campaign. After a preliminary question, Reich wrote, the pollster “then asked whether I trusted the Berkeley city government to spend the revenues wisely. At that moment I recognized a classic ‘push poll,’ which is part of a paid political campaign.” No on D spokesperson Salazar denied the opposition’s polling was biased. “That wouldn’t do us any good,” he said, “because the results would be meaningless.”

Berkeley resident Claire Broome attended a focus group billed as a discussion of Berkeley city government and politics. She quickly came to the conclusion that its real purpose was to build opposition to the soda tax measure. “That became totally clear,” she said, “when they brought in a cart with beverages and asked, ‘Do you think the tax will apply to this?’

“They were all eight- or twelve-ounce containers,” Broome continued, “and looked like drinks adults would consume,” including a Starbucks caramel macchiato. “It focused people on something that’s not the biggest problem — children drinking these massively large bottles of soda,” Broome said. “I thought that was directly misleading.” She added that the focus-group leader also “emphasized strongly that the funds would go to the city government.” A straw poll at the start of the discussion showed most people in favor of the tax, Broome said. But in a poll at the end, “I was the only person still in favor.” She added, “I had not been aware of [the ballot measure], but I was so appalled at how misleading I thought the presentation was and also how much people were confused and misled that I contacted the campaign.”

In addition to the emphasis on city council control of the funds, the No on D campaign argues that the measure itself is misleading and “full of loopholes.” In mid-August, opponents of Measure D filed suit against the city, alleging that the language it used in election materials was “biased, misleading, and false.” Alameda County Superior Court Judge Evelino M. Grillo agreed with plaintiffs about some of the terms. He ordered that the descriptions of the beverages to be taxed be changed from “high-calorie,” “sugary,” and “low-nutrition” to the more neutral “sugar-sweetened beverages.” Supporters of the measure said the changes were not significant.

And opponents say that despite the judge-ordered changes, the measure is still “misleading” and “full of loopholes.” Although the tax would apply to sodas, sports and energy drinks, sweetened juice drinks and teas, some sugar-sweetened beverages would be exempt, including baby formula, medicinal and weight-loss products, beverages that are mostly milk, and alcoholic beverages. “There are so many [exemptions] that it makes you wonder if this measure will have any real impact,” wrote No on D spokesperson Salazar in an email.

Salazar also charged supporters with “aggressive tactics,” noting that some opposition signs had been torn down, and said some supporters’ comments about the opposition on social media sites were “mean-spirited.” For example, soda-tax supporters emphasized the fact that local No on D campaigner Cain had only recently moved to Berkeley. “Lots of people move to Berkeley,” Salazar said. “I thought Berkeley was more inclusive than that.”

The campaign for the soda tax describes the contest as “Berkeley vs. Big Soda,” which is the name of their website. The push for the measure, said supporter Pam Gray, is “what I consider the best of Berkeley, a strong mobilization of a broad coalition for the future of our community and children’s health.” To counter that, “The American Beverage Association is throwing everything they have at this effort.”

Correction: The original version of this story mistakenly stated that Measure D supporter Pamela Gray was a member of the Berkeley Children, Youth and Recreation Commission. She is a former member of the commission. In addition, one section of the story confused the last names of Measure D supporter Sara Soka and opponent Leon Cain. It was Cain who registered to vote in Berkeley on August 4 — not Soka.