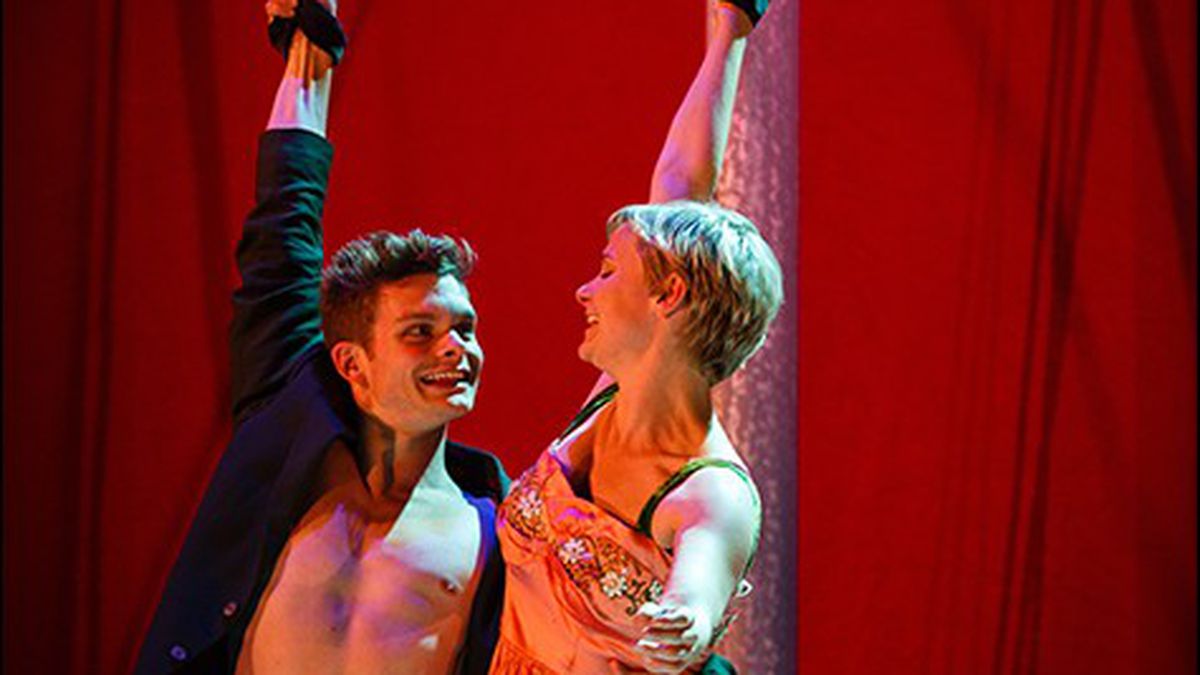 Come for the love story, stay for the funny hats.

Unlike many theater troupes performing today, Britain’s Kneehigh Theatre — the company behind last year’s The Wild Bride and Brief Encounter — appears hell-bent on making sure you have a good time. Kneehigh isn’t merely interested in you enjoying the show — although it succeeds swimmingly there as well — but in thoroughly enveloping you in its weird and wonderful world. To that effect, Tristan & Yseult, which runs through January 6 at Berkeley Rep, is the vehicle for that transformation, and it is entertainment at its best and brightest.

One of the oldest love stories on record, Tristan & Yseult involves a tragic love triangle between warrior Tristan (Andrew Durand), his Uncle, King Mark of Cornwall (Mike Shepherd), and Yseult (Patrycja Kujawska). After Tristan and Mark slay an Irish enemy, Mark wants to kidnap said enemy’s sister, Yseult, and make her his bride (because revenge was fucked up back then), and asks Tristan to go and fetch her. Once there, however, Tristan promptly falls in love with Yseult, thus unleashing the kind of drama fit for a Melrose Place episode, or, well, a drama. Their romantic entanglements are aided by a few comedic servants (Giles King and Craig Johnson); a handful of gawky Lovespotters (a play on trainspotters, but they are instead on the lookout for love); and Whitehands (Carly Bawden), a sensual-yet-point-blank narrator with Mad Men style and a sinuous voice, who relays exposition and details to the audience (sometimes through song) until she eventually joins the narrative herself.

Adapted and directed by Emma Rice (Brief Encounter, Oedipussy), Tristan & Yseult creates a collision of spectacle, storytelling, circus, music, dance, and comedy to delight and challenge our conceptions of what “theater” can be. The result is as jubilant and fun as it is moving and heartfelt. Part of the adventure lies in the demolition of the ever-oppressive “fourth wall.” The audience is asked to participate directly in the show’s merriment, by blowing up balloons and then releasing them into the air, and it’s hard to deny the jollity such acts invoke, even when one is firmly entrenched in the humbuggery of holiday craziness. The humor is clever, restrained, and unsurprisingly British, with a rolling emphasis on slapstick, dragtastic drollery, and the subdued gaiety that can only come from men dressed in funny hats.

The show is set not in some dreary Cornish castle, but in the Club of the Unloved nightclub, where Whitehands and the Lovespotters reminisce about their past romantic failures and play the occasional carnival game. The club’s musicians (directed by Ian Ross) play on a small stand above the sparse, yet somehow bacchanalian, set (designed by Bill Mitchell), and serve to amplify the story throughout (as well as before and during intermission, where they were helped out by an impressive, crooning Tristan and a violin-virtuoso Yseult). The cast’s talent, innovative spirit, and many role-changes brought new meaning to the phrase “all hands on deck.” One of my favorite parts was when it was gradually revealed that many of the nerdy and shy Lovespotters doubled as main characters as well. It was a slow-pan, a-ha moment, but also a creative take on the play’s recurring theme of the double.

The first half of the show is all terrific, frenetic fun with big-band numbers, jazzy showtunes, trampoline entrances, and boozy, acrobatic dance sequences. The second half is slower and more somber — it is a tragedy, after all — but the energy remains high throughout. My only criticism of the show is that the gags from act one started to feel a bit stale once we started getting to the heavier emotional turmoil. For instance, the scene in which King Mark’s servant spies on Tristan and Yseult in order to catch them committing adulterous acts (which involved much pantomiming, pulleys, and Polaroids) felt more like a tired Mission Impossible parody than anything LOL-worthy. But barring the occasional over-doing-it moment, the show was consistently and contagiously rousing, even during its darker clips.

As we came to the show’s big climax, the emotion kicked into high gear with galloping musical brushstrokes, dramatic lighting, and a gigantic white curtain that came tumbling helplessly to the floor, as if to say, “If you aren’t touched yet, your heart should be like this curtain.” The show’s impeccable staging and relentless imagination offer a little levity and a lot of heart to the Berkeley Rep stage, a perfect antidote to the season’s increasingly shorter and darker days.

Love is “the euphoria of impossibility,” Whitehands sagely remarks near the end of the production, which is also, coincidentally, a perfect catchphrase for what Tristan & Yseult represents. Do yourself a favor and go see it.