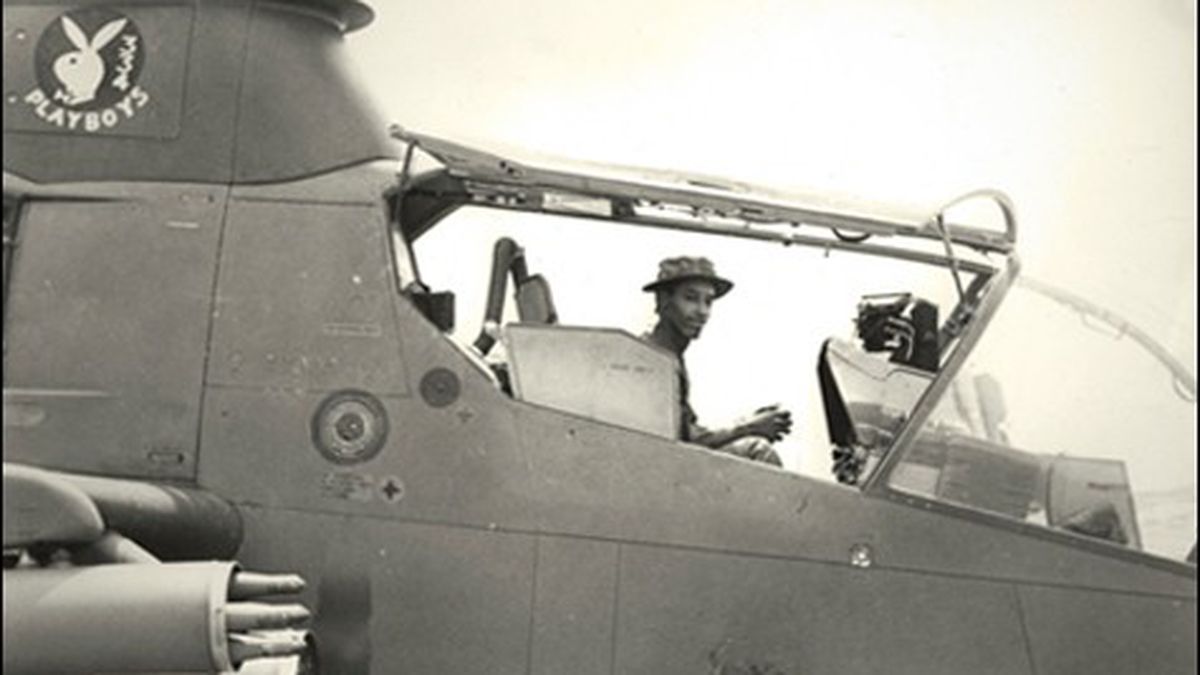 Lost and found, hide and seek.

In 2007, Berkeley artist Lutz Bacher stumbled upon a readymade exhibition. Languishing in the bins of salvage store Urban Ore was a set of ten yellowed photographs by a Vietnam War soldier named Walter. Walter is and is not the artist of Bien Hoa, the 242nd installment of the Berkeley Art Museum’s MATRIX Program.

His photographs alternately depict an American base and the shantytown-looking village beyond. His captions, addressed to a lover back home, confirm what the images suggest: a profound ambivalence about the military apparatus in which the author finds himself complicit. “This is a Huey Cobra, the badest [sic] helicopter in Vietnam,” he wrote on one. “Those are rockets on the side of ship. I wish I could take off and come home. Your man, Walter.”

Elsewhere, he frets about the aesthetic qualities of his photography. “This is a pretty good picture,” he said of one. “I messed up on my border at the top,” he said of another.

No question about it, these works were intended as art — but certainly not as Bacher’s. One can’t help but wonder, what would Walter or his loved one think if they were to discover this show? (Curator Dena Beard attempted to locate Walter, but to no avail.) “[Bacher’s] style of appropriating and reconfiguring found materials has this aggressive quality to it,” said Beard. “It’s a bit disruptive and makes the viewer feel a bit uncomfortable.” Indeed, the viewer becomes a trespasser, while Walter’s wartime question, “What am I doing here?” resounds in the very space he perhaps aspired to occupy: the gallery.

Oakland-based artist D-L Alvarez, too, appropriates an existing narrative: that of John Carpenter’s seminal slasher film, Halloween. In a series of drawings that look like severely pixelated film stills, Alvarez — whose works make up the 243rd MATRIX exhibit — retells an iconic scene, in which the innocent female protagonist fends off the serial killer villain from within a closet.

The story that Alvarez exhumes, however, is a larger one, describing a particular historical moment. “This film, more than any, was the most emotionally honest representation of the vulnerability that spread across California and the US in the wake of the Manson Family murders,” he said. “History interests me, not just for what has happened in the past, but also for how that past gets handed down to later generations. Almost all of my work contains, and is about, this backward glance.”

Alvarez’ visual language of gray-scale, gridded pixelation could not be better suited to his conceptual ends. Not only does it evoke the VHS format, a home-viewing technology that, coincidentally, emerged concurrently with the domestic uneasiness of the post-Manson murder years, but it underscores the artist’s interest in narrative bias as well. Alvarez’ grid, tighter in some places than in others, explicitly directs the viewer’s eye, proclaiming what visual information is important, what is not, and where it may have been left out altogether.