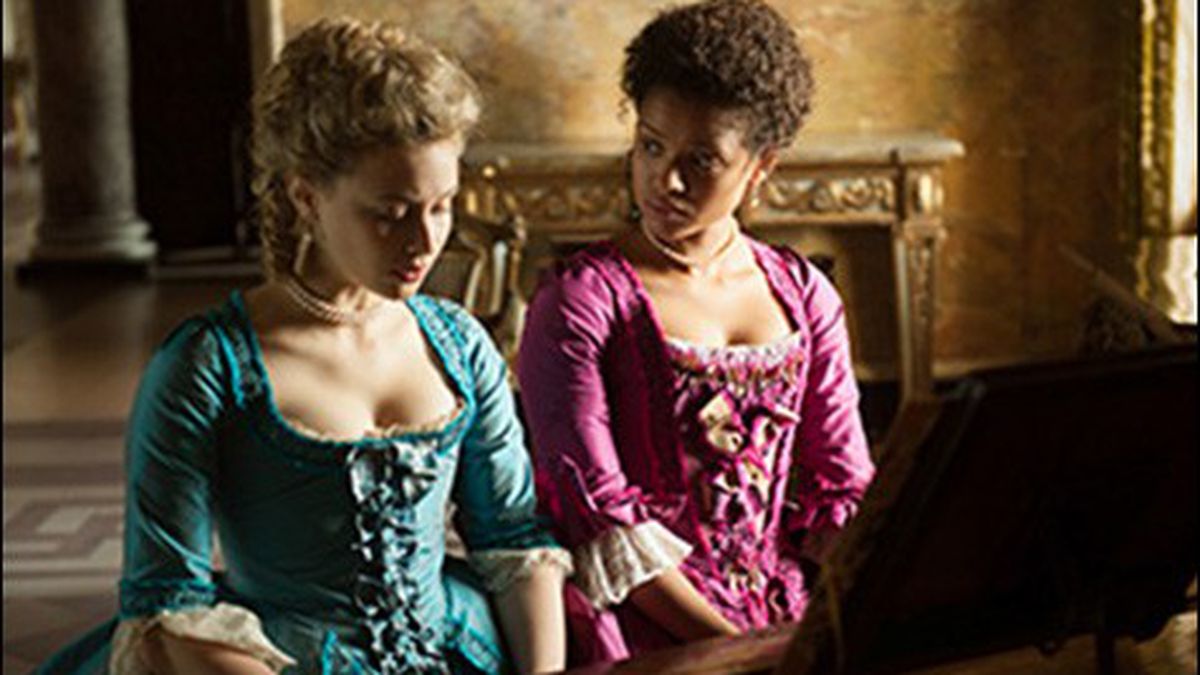 God bless the child that's got her own.

The latest example of the important rule “Never judge a movie by its advertising” is Belle, a costumed drama from the UK directed by actress-turned-filmmaker Amma Asante. From its ad art, which features the splendidly dressed actress Gugu Mbatha-Raw standing in a similarly decked-out antique European drawing room, we might expect Belle to be a Coffee-Table Film with a biracial wrinkle. We’d be right, up to a point. But the film goes much further than that.

In the first fifteen minutes there’s a strong whiff of vintage Merchant Ivory/A Little Princess/Jane Austen romantic scene-setting, as we witness the key moments of Dido Elizabeth Belle’s early life. Dido is the daughter of Captain Sir John Lindsay (Matthew Goode) and a dimly remembered black woman from somewhere in the colonies. The film opens in 1769, with eight-year-old Dido’s Royal Navy officer father delivering her for safekeeping to the country household of his uncle, William Murray, First Earl of Mansfield (Tom Wilkinson). Lord Mansfield, who happens to be the Lord Chief Justice of England, accepts the child (played by Lauren Julien-Box) wholeheartedly — she’s his blood relative and thus automatically qualifies as a noble, regardless of the color of her skin.

It’s only when the beautiful Dido reaches her young womanhood that her situation becomes truly topical. She suddenly acquires a permanent income, guaranteeing her a comfortable life and removing the necessity of the family finding her a suitable husband — an almost impossible task not only because of her mixed race but also because convention dictates that she mustn’t marry below her station. Thus, while her “sisterly” cousin and best friend Elizabeth “Bette” Murray (Sarah Gadon) is consumed with the quest to land a worthy mate among the local upper-class twits, Dido can relax a bit. The only need she has to satisfy is the desire for true love.

Dido, a headstrong quick study as opposed to the lightweight Bette, is faced with a three-pronged dilemma. First and foremost is her blackness. The 18th-century British Empire derived a sizable percentage of its income from the African slave trade, and aside from the usual xenophobic fear/disdain toward people of color, the taint of servitude hangs over any non-white person, no matter how powerful her uncle might be. For instance, when Lord and Lady Mansfield (the latter played by Emily Watson) entertain important guests at their dinner table, Dido is required to be absent, appearing only after dinner to perform on the piano and answer snobbish inquiries about her lineage.

The second obstacle is the near-comical upper-class English habit of calculating a prospective mate’s financial worth in addition to his/her class status. Jockeying for passive income and social position is a full-time job for these people. The Mansfield/Murrays’ aristocratic neighbor in Hampstead Village, Lady Ashford (Miranda Richardson, chewing the brocade off the upholstery), might recoil at the sight of Dido, but she certainly admires the fact that the Mansfields have no male heirs. So if she can contrive to marry off one of her sons — bigoted bully James (Tom Felton) or mild-mannered Oliver (James Norton) — to cousin Bette, the Ashfords could inherit the Mansfield estate. Meanwhile, lucky Dido, liberated by her inheritance, strikes up a friendship with the vicar’s son, John Davinier (Sam Reid), a free-thinking member of the professional middle class.

Dido’s third barrier is that she’s a woman, always considered the property of whatever man to whom she is attached. Actress Mbatha-Raw, a native of Oxford, portrays the real-life character of Dido as culturally advanced in all the aforementioned troublesome arenas of public and personal life. In the screenplay’s version of history, Dido’s example directly influences the Lord Chief Justice’s thinking in a landmark court case involving slave traders insuring their property (human chattel) against loss (in this case, murder). Times are changing in England and Dido is at the forefront. So screenwriter Misan Sagay and director Asante can congratulate themselves. They manage to overcome the romance-novel tempest-in-a-teapot syndrome by using the same basic ingredients to tell an inspiring, basically true story of injustice overruled. With sumptuous gowns and interiors, of course.