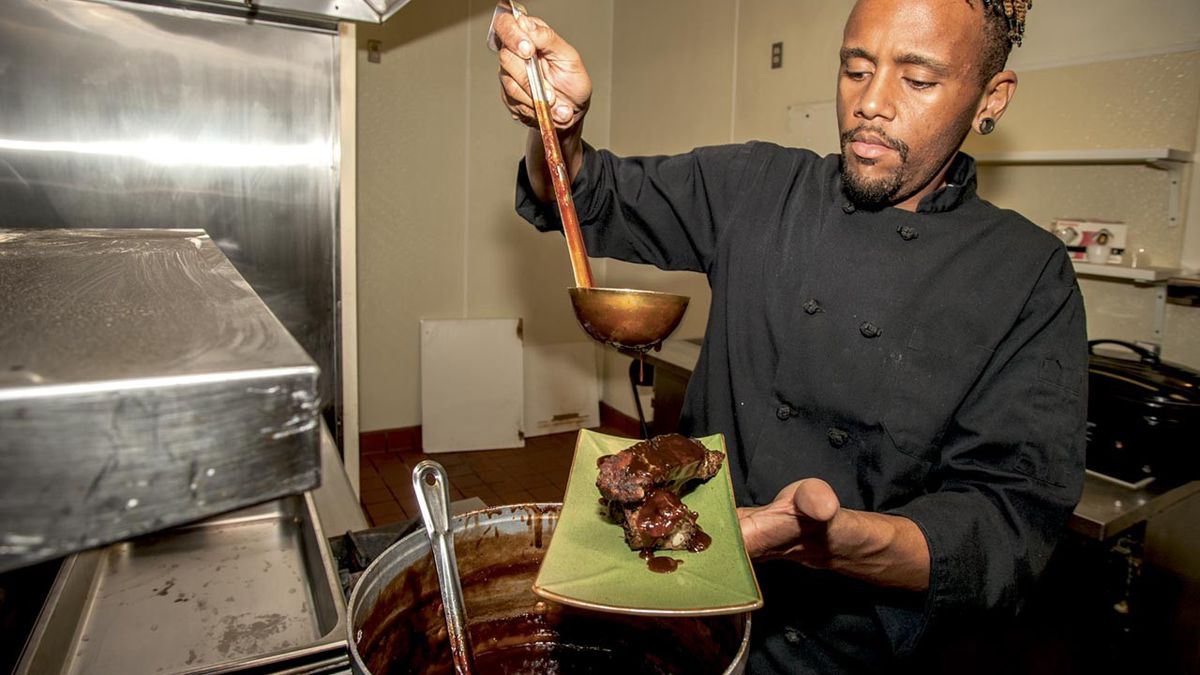 Believer in Food as a Catalyst for Change

His great-grandmother, Sarah Rawls, opened up shop in West Oakland selling egg sandwiches made on a hot plate. From there, her restaurant empire grew to several full-service restaurants throughout the Bay Area. She was the star of her own cooking show, Down-Home Cooking with Sarah, and the author of four cookbooks. The rest of his family also loved to cook.

“Food is our thing,” Armstead said. “It’s a part of my family legacy.”

Raised in various parts of the Bay Area and Modesto, Armstead got his start in professional kitchens as a hospital dishwasher at the age of fifteen. Following high school, he attended a six-month culinary program, then worked at an Asian fusion restaurant in downtown Los Angeles at the age of nineteen. He briefly cooked at Santa Rita Jail — “it was just horrible,” he recalled — and then worked as a chef at a UC Berkeley sorority. After that, he ran his own catering company, then started doing massively popular pop-ups under the name Crave BBQ.

Crave BBQ was supposed to get its first brick-and-mortar space at the historic California Hotel on San Pablo Avenue. But despite Armstead’s best efforts to raise money for the build-out, he couldn’t make it work financially. “I was really down on myself, ’cause I wanted it so bad,” he recalled.

So Armstead set his sights on other spaces and concepts. In June, he opened his first brick-and-mortar restaurant, Grammie’s Down Home Chicken and Seafood, at 3817 Market Street in North Oakland. Named after his great-grandmother, it’s a bare-bones space with just a few chairs and a single table. Yet despite its austere appearance, Armstead pumps out excellent fried chicken, fish, shrimp, and sides at affordable prices. There aren’t many restaurants in the neighborhood, nor is there a lot of foot traffic. But for Armstead, it was exactly the type of location he was looking for.

“I believe that if I’m not bringing representation of the community to the community, then there’s a problem going on.”

He said the community’s positive response to Grammie’s opening was “overwhelming.” But through all the ups and downs — the California Hotel location falling through, the success of Grammie’s — Armstead had been keeping a secret for over a year.

In July, his secret was finally revealed on an episode of Chopped, where Armstead prevailed as the show’s champion. Since his Chopped win, business at Grammie’s has been booming. People who have lived in the neighborhood for generations eat at Grammie’s alongside newcomers; customers of all ethnic backgrounds are represented.

And there’s even more good news: Armstead secured a home for Crave BBQ at the Hilltop Mall in Richmond, which opened in August. It’s a full-service restaurant with an events space, which will host blues and jazz bands, and comedy and open mic nights.

Despite all his personal successes, though, Armstead wants to make fundamental changes in the way the restaurant industry works — even if it means a tougher road for him.

“I could shut down all of this, and I could turn around and go find a career as a corporate chef or a restaurant chef and make really, really good money,” he said. “But because I know that I’m fighting for something greater than me, I can’t just walk away from it.”

Armstead is determined to build his businesses so he can help others in the community. He’s currently crowdfunding on IndieGoGo to pay for the Grammie’s and Crave BBQ buildouts, and to be able to hire new employees at a living wage. He’s hoping people in the Bay Area will put their money where their mouth is — not just condemning gentrification, but actively supporting small, locally owned businesses via his campaign. Many of the people he’s interviewed for positions at his restaurants already have two jobs and drive for rideshare companies on the side. His vision is that everyone that works at Grammie’s and Crave BBQ will earn a living wage from his restaurants alone — no side jobs required.

“Food is important. Treating the customers, that’s important too. But making sure that the people who work for you, they need to be happy too.”

At both Grammie’s and Crave BBQ, he’ll also recruit youth from programs like Civicorps to work in his restaurants. He’ll help them build skills and a strong work ethic, and help them stay out of trouble — which is what food did for him.

But he’s also hoping to build the next generation of food entrepreneurs. Armstead is acutely aware that many would-be restaurant owners, especially from the Black community, haven’t had access to credit, loans, or wealth necessary to start their own restaurants, so he’ll start a franchising program to allow them to gain part-owner status.

Ultimately, Armstead hopes that there’ll be Grammie’s and Crave BBQ locations “in every hood across the country,” headed and staffed by members of those communities. It’s a way to fight low wages, rising rents, and gentrification driven by large corporations.

“They’re gonna hire people from the community, and it’s gonna become a cornerstone for other businesses coming in there,” he said. “That’s how you create generational wealth.”&#8;

To learn more about Armstead’s restaurants, visit EatGrammies.com and ICraveBBQ.com.