.Beauty in a Bagel Shop

Besides its Montreal-style bagels, Beauty's Bagel Shop is also a great place for sandwiches, smoked fish, cold salads, and more. 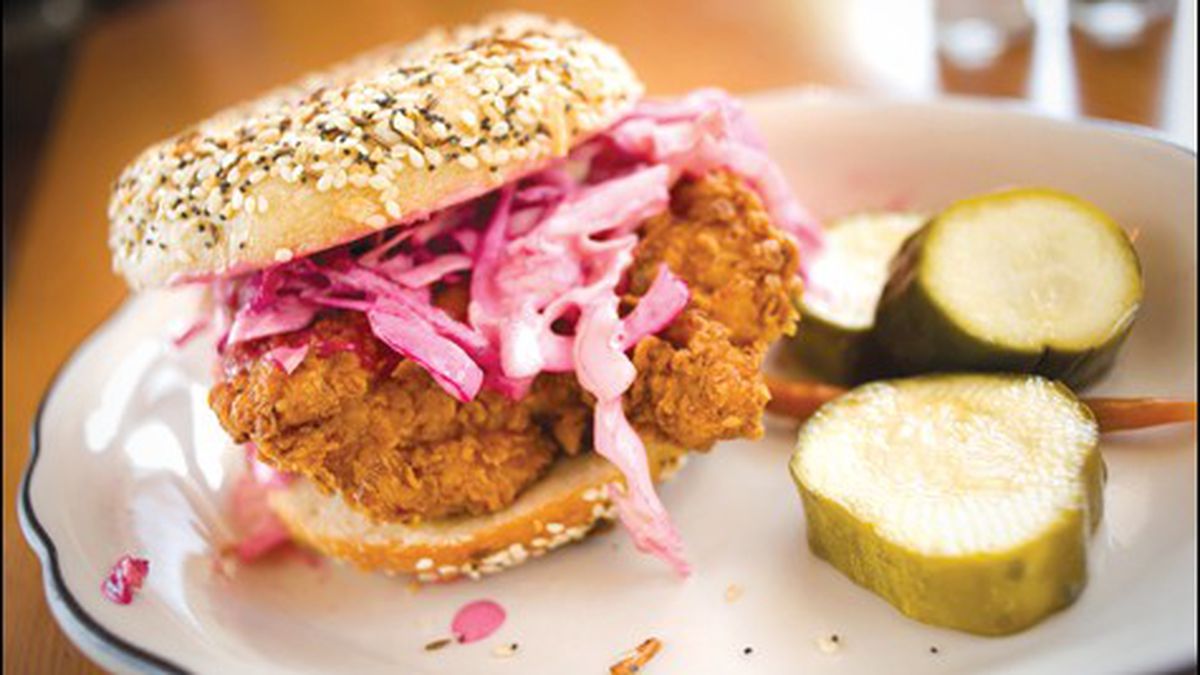 Appetizing stores, which sell bagels and their Jewish accoutrements, are a rarity. Which is one reason why Beauty’s Bagel Shop — a part-cafe, part-appetizing store that opened in Temescal about a year ago — has attracted so much attention. Yet while much has been written about the Montreal-style bagels, little has been said about the array of sandwiches, smoked fish, cold salads, and other items on offer, even though they are plenty worth mentioning and worth eating.

But, first, the bagels themselves.

Beauty’s is part of the wave of artisanal bagel makers that rolled in last year, along with Schmendricks and Baron Baking, They’ve given the bagel the dignity it deserves here on the West Coast, where they have long tended to be soft and puffy, and sometimes pastrylike, with blueberries or cinnamon and raisins.

Beauty’s’ Montreal-style bagel is hand-rolled, and, unlike New York bagels, boiled in water flavored with honey and fired in a wood oven, giving it a subtle touch of smoke and sweetness. It’s dense and a little on the dry side, but with a crust that snaps, especially when topped with poppy or sesame seeds. For all its density, it’s still easy to bite into. There are no raisins or fruity additions here.

I grew up in the Bay Area, and lack particularly strong feelings about bagels. I have no memories of a New York childhood, eating bagel sandwiches with eggs, butter, ketchup, and salt and pepper. That said, every time I have a sandwich at Beauty’s, I feel a little closer to becoming a convert.

I like the sandwiches plenty. I especially liked the organic fried-chicken sandwich on a lightly toasted salt-and-pepper bagel. The chicken was hot and juicy, reminiscent of the one sold at Bakesale Betty just down the street. The bagel complemented its filling — the honey flavor of the bread gave a subtle counterpoint to the savoriness of the chicken, and the bagel soaked up the chicken’s juices, making it a little less dry.

The salad of the day showed off chef-owner Blake Joffe’s Pizzeria Delfina pedigree. It was a crisp, well-balanced mixture of watermelon and baby arugula, with dabs of Point Reyes blue cheese — a fresh-tasting salad, and a steal at six dollars.

The bagel breakfast sandwich, with eggs and chicken scrapple, was satisfying and homey, its melted cheddar cheese pooling at the bottom of the plate. Scrapple, a Pennsylvania Dutch staple, is cornmeal mush laced with chicken and pan-fried, and in this case it had an extra crunchy exterior and a moist, uniform interior — hearty but not too heavy. An everything bagel, toasted and buttered, gave the sandwich some needed spice and interest: The poppy and sesame seeds were crunchy and provided bursts of aroma.

Also worth mentioning is the smoked-trout sandwich on a whole-wheat everything bagel. It was generously portioned, a touch on the salty side (but not in a bad way), and delicious when paired with the crunch of radishes and butter lettuce. The lightness of the fish coupled with the crisp lettuce reminded me of dainty tea sandwiches. It’s probably best eaten open-faced, with a fork.

On Fridays at lunchtime, Beauty’s sells bagel dogs. Most dogs make my stomach queasy; Beauty’s is a game-changer. The all-beef dog, made in-house using a Wise Sons Deli recipe, is heavy on the pepper and a little on the dry side. It’s a little more like a moist pepperoni stick than the watery beef sausages of movie theaters and ballgames. The “bun,” rolled in black poppy seeds, is more like a soft pretzel. I could’ve eaten it by itself, dipped in the accompanying hot mustard. It also came with a dilly and creamy potato salad, and a mouth-puckering kraut dressed in juniper and mustard seed.

The menu is strongly rooted in East Coast ethnic dishes that smack of comfort — one of their lunchtime specials is poutine, a Quebecois specialty containing cheese curds, thick-cut French fries, and mushroom gravy. But despite having a menu that leans heavily toward the salt, cream, and carbs, Beauty’s has the smarts to keep things light. The herbs and spices in its salads, pickles, and other sides are fresh and liberally used, staying in touch with a West Coast ethos.

I imagine that bagels are to East Coasters what burritos are to Californians. If that’s the case, Beauty’s probably does satisfy those East Coasters who miss a good bagel, and who miss the East Coast in general. It seems the shop owners share the feeling. The place bursts with sincere nostalgia, with its pastel-colored walls and faded tiles reminiscent of an old-school greasy spoon. (The name Beauty’s is a reference to a landmark Montreal diner.) Behind the counter, bakers can be seen slipping bagels into the wood oven on long trays. In some ways, Beauty’s feels like you’ve stepped inside a different kind of place altogether, a place where people are big-boned, cheese-fed, and stoic, in need of hearty, rustic fare.

That said, there are plenty of hipster-ish touches (terraria, an Elvis Costello soundtrack) to remind you that the place is indeed in Temescal, and on some days it is mainly populated by the bicycle-riding and tattoo-adorned set. On others, the tables aren’t so homogeneously filled, the shop is quiet, and the heat from the oven makes it warm and cozy. The staff behind the counter may remember your face. You might even begin to feel nostalgic.