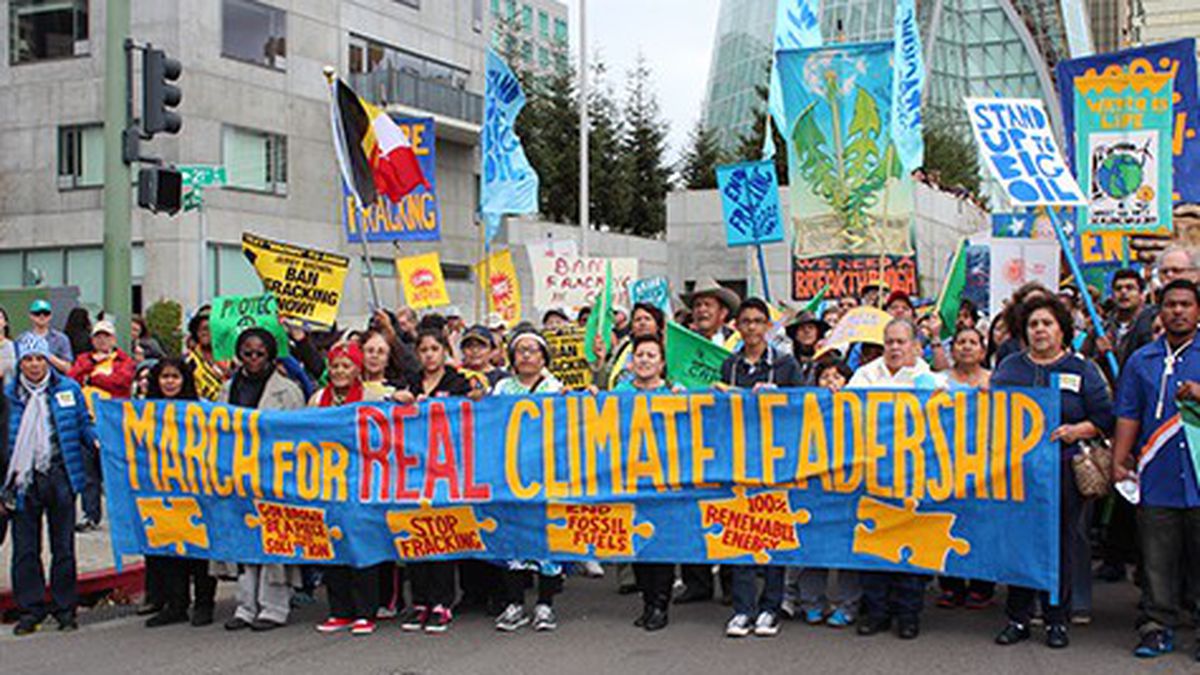 Bay Area workers and unions are increasingly joining the climate justice movement, but their pension funds have been quietly investing in the oil and natural gas boom.

Deep in the heart of Texas, the oil industry is still going strong. Take Navitas Midstream, a private corporation that specializes in transporting fossil fuels. Navitas is currently laying a pipeline that, when completed later this year, will funnel natural gas fracked from the Eagle Ford Shale into a processing plant that’s also under construction. Called the “La Bahia System,” the pipeline and plant will handle 120 million cubic feet of natural gas per day. La Bahia is part of a labyrinth of fossil fuel infrastructure that’s growing and will generate billions in profits for its owners — even with the current slump in oil prices. But it also is fueling the fracking boom and climate change.

Surprisingly, the source of financing for this fossil-fuel operation includes the pension funds of Bay Area workers whose unions are now taking stands against fracking. And few of the union members realize this fact.

Investors in La Bahia, through a limited partnership managed by the Warburg Pincus private equity firm, include 17,000 members of the California Nurses Association who work at Kaiser hospitals, and about 22,000 University of California employees who are members of the union AFSCME Local 3299. Through their pension funds, the retirement savings of these workers are being leveraged to build the Texas pipeline and plant.

On February 7, nurses made up a large contingent of workers in the “Labor Against Fracking” rally held alongside the massive climate justice march in Oakland. Last year, the nurses union also supported fracking bans in Santa Barbara County and in the city of Carson in Los Angeles County. AFSCME 3299 also endorsed the recent climate justice march in Oakland. Speaking at the rally, Local 3299 President Kathryn Lybarger said, “fracking is absolutely atrocious. It’s hideous for our families and our environment.”

So, even as unions join the movement for climate justice, the pensions of their members and staffers are being used to fund the growth of oil giants and wildcatters. Why? The current system of managing workers’ pensions is still focused on investments that generate big returns for pension funds — regardless of the social and environmental consequences. In fact, fracking could not exist in its present form without the capital supplied by benefit funds set aside for American workers.

When asked about this contradiction, union officials described a difference between what they believe they can control, and what they can’t. “The policy of our union is to support the fossil fuel divestment movement,” said Fernando Losada, the director of environmental health and climate justice at the National Nurses United, of which CNA is a member. “But, frankly, the pension funds our members are part of, we don’t control, so our ability to advance divestment is somewhat limited.”

CNA nurses employed by Kaiser Permanente have defined benefit pensions through the Kaiser Permanente Retirement Plan. The plan’s board, however, is controlled by representatives of the HMO, not the union and its members, according to Losada. Kaiser workers can try to influence the pension board’s investment decisions, said Losada, but the nurses union has been focused primarily on securing a defined benefit pension for their members in the face of a national movement to dismantle these types of retirement systems.

“Not everyone can combat climate change at a level of investment easily, because not everyone has the same access to the system of governance,” said Todd Stenhouse of AFSCME 3299. “There’s a big difference between serving in an advisory capacity to a pension board, and say, sitting around the table where the actual votes are made.” However, AFSCME International and other unions have well-funded “capital strategies” departments whose missions include researching and making recommendations about investments to pension fund trustees who often make investment decisions.

Navitas Midstream received a $500 million shot of this capital last June, helping kickstart the Texas pipeline. A press release issued by Navitas last June described the investment as crucial for the company’s expansion. “We are delighted to have the support of Warburg Pincus to assist us in developing and growing the business,” stated R. Bruce Northcutt, the CEO of Navitas.

Other Bay Area workers with a stake in the gas project, through investments in the Warburg Pincus fund, include Alameda County employees, San Jose police officers and firefighters, San Mateo County employees, and Northern California grocery store workers represented by the United Food and Commercial Workers.

By far the biggest conduit directing workers’ savings into the fossil fuel industry is the California Public Employees Retirement System. CalPERS controls the retirement savings of members of progressive Bay Area unions that have expressed opposition to fracking, such as SEIU Local 1021 and AFSCME Council 57. But CalPERS refuses to divest from the fossil fuel sector as a means of addressing environmental damage associated with fracking and climate change, and holds billions of dollars of stock in fossil fuel giants such as Exxon Mobil, Shell Oil, and the coal company Peabody Energy. CalPERS is also a major investor in private equity partnerships responsible for financing oil and gas exploration companies. For example, in 2012 CalPERS committed $400 million to the Riverstone Global Energy and Power Fund V, a limited partnership managed by Riverstone Holdings, LLC, a private equity firm specializing in energy finance. Over the past three years, Riverstone has used CalPERS money to provide growth capital to thirty oil and gas companies.

AFSCME Local 444 was another endorser of the February 7 climate justice march in Oakland. Members of AFSCME Local 444 who work for the East Bay Municipal Utility District own stock and bonds of dozens of oil and gas companies through the fund holdings of the district’s $1.3 billion retirement system. For example, included in several stock and bond funds owned by the EBMUD retirement system are shares in and bonds of the Freeport McMoran company. Last year, Freeport McMoran sought permits to expand its oil drilling operations in a Los Angeles neighborhood. The proposal involved injecting hydrochloric acid and the carcinogen benzene into the earth to free up hydrocarbons, a process known as acidization.

But the use of retirement funds to finance the fossil fuel industry is not just limited to pensions controlled by entities other than unions. Many unions administer pension systems for their own employees, and so the union’s executives have ultimate discretion over the investments the funds make. And one such fund, AFSCME’s union staff pension fund, which covers approximately 3,800 staff members, including employees of several Bay Area AFSCME locals, directly holds $54 million in oil and gas company stock and bonds, including Exxon Mobil and Shell Oil. Exxon and Shell operate a joint enterprise called Aera Energy that fracked 497 wells in the state in 2014, more than any other company, according to data collected by the California Department of Natural Resources.

“It’s a deeply held belief by public sector employees that fracking is a practice that needs to stop,” said Cheryl Brown, the political and legislative director of AFSCME Council 57. “Our members are very concerned about the effect on water and land and air.” Brown said, however, that Council 57 hasn’t yet examined how the retirement savings of its members and staff are being used to finance fossil fuel enterprises. Council 57 did endorse SB 1132, a bill that would have strengthened regulation and oversight of fracking operations in California last year, and last year the union also sent a letter to the Alameda County Board of Supervisors in support of a county ban on fracking.

SEIU 1021 members, whose retirement plans are run by CalPERS, visited fracking sites in the Central Valley last year. A blogpost on the union’s website states that its members and staff were “horrified,” witnessing “fracking wells near agricultural fields, community gardens and elementary schools, poisoning the air and water of working class and immigrant communities, causing an epidemic of asthma and cancer.”

Some unions are trying to understand how the financial system is using pension dollars. “We have people in our administration looking into how we can be greener in our investments,” said SEIU 1021 Executive Director Pete Castelli. “We want to take this a step further, we want CalPERS to be more responsible with their investments. We don’t have it all figured out but our members are keen on taking on the issues in that arena,” said Castelli.

But most unions outsource the actual work of picking stocks to consultants and investment managers, or else leave the work of managing pensions to the government or employer boards currently in control. And while many unions have historically used their staff pensions to advance their members’ economic goals, most unions don’t have formal policies regarding fossil fuel investments, resulting in a situation in which their members’ concerns over fracking are frustrated by the financing of it by their own pension funds.

Correction: The original version of the story misstated Pete Castelli’s job title. He is the executive director of SEIU 1021 — not the president.