.Banking on Coal in Oakland

Records show that a secretive plan to ship coal through the Port of Oakland is being driven by a company that wants to massively expand its coal mining operations in Utah and by a public official who stands to profit personally. 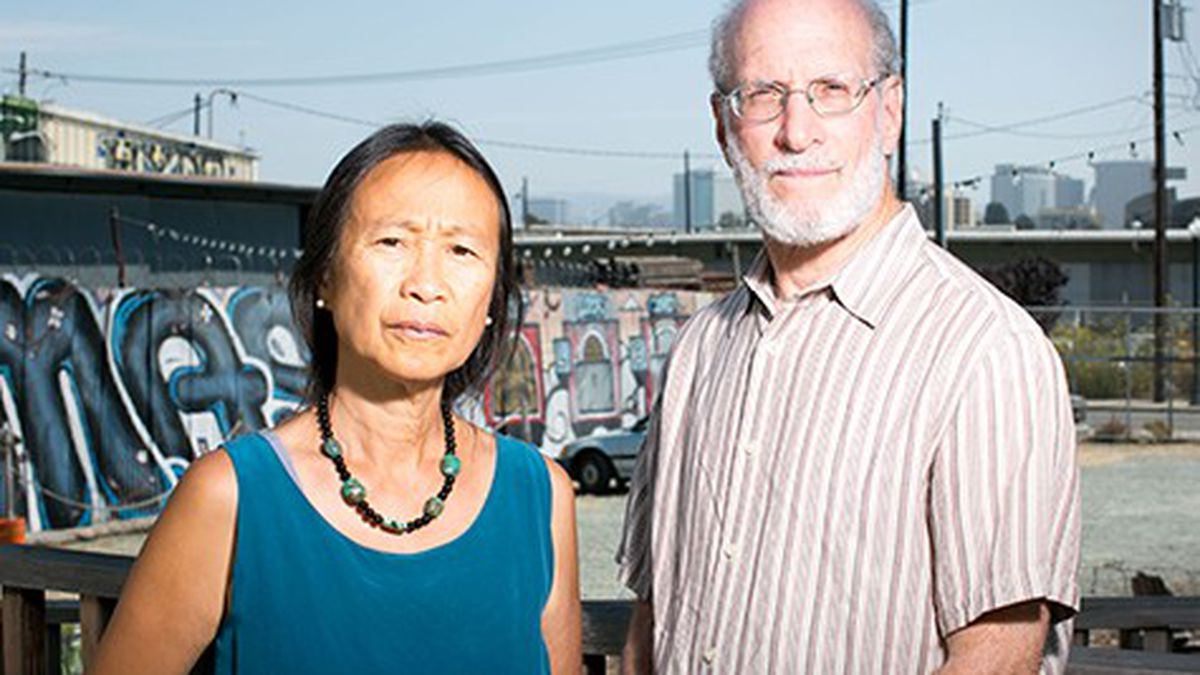 Last April, when plans to ship coal through the old Oakland Army Base became public, Phil Tagami, the master developer of the base, came under fire from local officials and community groups. Tagami, however, downplayed the news, claiming that coal is only one of many goods that might be shipped through a new maritime bulk terminal that he’s building on the base. He also said in statements to the press that a $53 million investment that four Utah counties hope to make in the marine terminal would allow these counties to ship potash, hay, salt, and other Utah goods, perhaps including coal, through the facility.

But emails, contracts, and reports reviewed by the Express show that the proposed investment in the bulk marine terminal by the Utah counties is, in fact, driven by a secretive Kentucky-based coal company, Bowie Resource Partners, that wants to massively expand its coal mining operations in Utah. And if accepted, the Utah counties’ investment in Oakland’s Army Base redevelopment project would make the proposed bulk terminal a major export hub for millions of tons of new coal from Bowie’s mines in Utah. Records also show that a Utah public official who is leading the deal stands to profit personally.

Commissioners from four Utah counties — Sevier, Carbon, Emery, and Sanpete — are marshalling millions in public subsidies to build the infrastructure that will carry the coal from Bowie’s mines to Oakland, where it will be loaded onto ships bound for Asia.

Jeffrey Holt, who has been the chairman of Utah’s Transportation Commission since 2009 and is an investment banker with the Bank of Montreal, is advising the four counties on their Oakland port investment. In March, Holt led a field trip from Utah to Oakland to scope out the terminal site. In April, Holt helped the counties obtain the $53 million public loan from a Utah state agency to help build the coal export terminal at the Oakland Army Base.

Holt is also helping to assemble financing for another group of Utah counties that is building a railroad that will haul coal from a Bowie Resources mine in Utah — known as the Sufco mine — and would establish a rail link to the Union Pacific Railroad, thereby allowing for the shipment of coal to Oakland’s waterfront.

Holt and the Bank of Montreal stand to earn millions if the railroad and coal terminal in Oakland are built. Bowie Resources would earn millions more shipping Utah coal through Oakland. The details of these plans to expand coal mining in Utah and to establish Oakland as a massive coal export hub have — until now — been kept under wraps by the parties involved, including the Oakland team building the export terminal led by Tagami.

But Bowie’s coal export scheme, heavily dependent on public subsidies, is by no means assured. The Utah railroad and Oakland terminal investments, masterminded by Holt, are incredibly risky. Expanded coal mining in Utah faces opposition from environmentalists. And many in Utah question the use of public funds to subsidize coal companies. Finally, coal exports from Oakland face growing opposition, with the Oakland City Council scheduled to consider the matter on September 21. Three councilmembers — Dan Kalb, Lynette Gibson McElhaney, and Rebecca Kaplan — have already spoken out against the idea of coal moving through the Army Base terminal.

Bowie’s plan to secure Oakland as its coal export hub emerged in February 2014 when the Port of Oakland, citing environmental concerns, rejected a bid by the company to build a coal export facility at the Howard Terminal. Stymied at the port, Bowie looked to the small slice of city-owned waterfront where Tagami’s company CCIG is planning to build a bulk commodity terminal as part of the massive Army Base redevelopment it has been contracted to complete by the city. In April, the Utah Permanent Community Impact Fund Board (CIB), a special state agency that makes grants to rural Utah counties for sewers, fire stations, and other municipal improvements, quietly approved an unusual $53 million low-interest loan to Sevier, Carbon, Emery, and Sanpete counties. In a presentation to the CIB, Holt and several commissioners representing the four counties said the funds would contribute to a $200 million maritime terminal in Oakland that would export many different commodities. Appearing with Holt and the county officials was Mark McClure, vice president of CCIG.

When the CIB loan was first reported by a small Utah newspaper as securing access specifically for Bowie Resources’ expanded coal exports through Oakland, Holt and others worried the revelation could kill the project. On April 8, the day after the Richfield Reaper newspaper reported the loan, Holt emailed commissioners of the four Utah counties. “We’ve had an unfortunate article appear on the terminal project,” wrote Holt. “If anything needs to be said, the script was to downplay coal, and discuss bulk products and a bulk terminal.”

Holt also wrote that Tagami was disappointed that the plan to export coal had been made public. “Phil Tagami had been pleased at the low profile that was bumping along to date on the terminal and it looked for a few days like it would just roll into production with no serious discussion,” wrote Holt.

Tagami did not respond to emails and phone calls seeking comment for this report.

Records also show that Bowie Resources’ plan to mine coal from Sufco appears to depend on the Oakland deal going through and that the company might not otherwise find a market for the fossil fuel. As such, shipping coal through Oakland likely will lead to a massive expansion of coal mining in Utah that might not otherwise occur.

Official Utah records and a recent business prospectus issued by Bowie show that Bowie Resources bought the Sufco mine in 2013 from Arch Coal, one of the largest US coal companies. In financial reports from previous years, Arch Coal described the Sufco mine as facing a significant production decline, because its existing leased coal reserves were depleted. But in a prospectus filed with the Securities and Exchange Commission in June, Bowie’s executives explained their business strategy: Bowie is seeking access to a vast coal deposit, not in the Sufco mine, but in an area accessible through the mine known as the Greens Hollow Tract, which is buried under the Fishlake and Manti-La Sal National Forests in Utah. “We expect to obtain a lease from the [Bureau of Land Management] through the lease by application process for the Greens Hollow tract, which contains approximately 50.5 million tons of non-reserve coal deposits, including those in the Lower Hiawatha seam, accessible through our Sufco mine,” the prospectus states.

“[W]e expect long-term international demand for thermal coal to increase,” Bowie executives wrote in the prospectus. “Given our low cost of production […] and unique access to U.S. West Coast terminals, we believe we will be competitive selling our coal into the seaborne market in the future.”

James Wolff, chief financial officer of Bowie Resources, declined to comment about Bowie’s plans. Representatives of Trafigura, a Swiss commodities trading corporation that owns 46 percent of Bowie and sells its coal in overseas markets, also declined to comment on its plans for the Utah coal.

Records show that Holt, the Utah public official spearheading the Oakland deal, could personally profit from it. During his time as Utah’s transportation commissioner, Holt has worked to convince county commissioners in resource-rich parts of Utah to use public funds for fossil fuel infrastructure projects. In 2014, Holt also signed a contract with Sevier County to be the county’s financial advisor to help it build the Central Utah Railroad, which would transport Sufco coal to the Union Pacific Railroad’s mainline, and then on to Oakland. According to the contract’s terms, Holt and the Bank of Montreal will receive at least $2 million from Sevier County taxpayers if the railroad is built, regardless of whether the Oakland deal goes through.

Holt did not return emails or phone calls seeking comment for this report.

Bowie Resources, Holt, and Tagami face increasing resistance in Utah and Oakland. In Utah, environmentalists are appealing a decision by the US Forest Service and US Bureau of Land Management (BLM) to lease the Greens Hollow Tract to Bowie. Meanwhile, some Utah residents and officials believe that the Utah Permanent Community Impact Fund Board (CIB) has been hijacked by Holt and others to illegally subsidize the fossil fuel industry. And in Oakland, a coalition of community groups and environmentalists are searching for ways to ban coal exports from the Army Base terminal.

Taylor McKinnon of the Center for Biological Diversity said in an interview that his group has already appealed the US Forest Service and BLM environmental impact statements for the proposed coal lease of the Greens Hollow Tract. “If they deny our objections out of hand, we’ll consider taking the Forest Service and the BLM to court,” said McKinnon.

Jeremy Nichols of Wildearth Guardians, another group fighting the Greens Hollow Tract mineral lease, said expansion of the Sufco mine would damage habitat in the region, and worsen global warming.

According to Chris Baird, a commissioner of Grand County, Utah, CIB dollars come from federal mineral leases and are supposed to mitigate the harms of fossil fuel extraction. For years the CIB has made grants and loans to build schools, fire stations, and water treatment plants. But according to Baird, when Holt was on the CIB the board, he and other board members attempted to use CIB funds to build a railroad into the Uintah Basin to serve oil companies interested in extracting tar sands deposits. That deal fell through. The $53 million loan for coal exports through Oakland is the latest example of Holt and other Utah officials steering CIB money into fossil fuel projects, according to Baird. But this time, Holt has been working not as a CIB board member, but as a private investment banking consultant who stands to profit from the deal.

“I see it as straight up subsidization,” said Baird. “All this money they are spending won’t go into projects like senior centers.”

“In my opinion, recent decisions of the Community Impact Board violate state and federal law,” said Christina Sloan, a Utah attorney who has also criticized the fossil fuel infrastructure projects promoted by Holt.

In Oakland a coalition of community groups and environmentalist say they welcome investments in the Army Base — so long as fossil fuel exports are excluded. “If they want to invest $53 million, we welcome it, but not for coal,” said Lora Jo Foo, an Oakland resident and member of the Oakland Fossil Fuel Resistance coalition.

On August 4, Foo and Aaron Reaven, a member of the environmental group 350 Bay Area, traveled to Utah to a CIB board meeting. “We handed out a packet to all the CIB board members at eight in the morning, so they all know, here’s ten reasons Oakland may not accept your investment if it includes coal,” said Reaven.

“Phil Tagami’s expertise is rounding up public funds to make his projects happen,” added Reaven. “The Utah end of this counts as public money also, just from another state, so we wanted to get the message across to the developers that the coalition here is going after every funding stream possible to make sure coal doesn’t come to our city.”