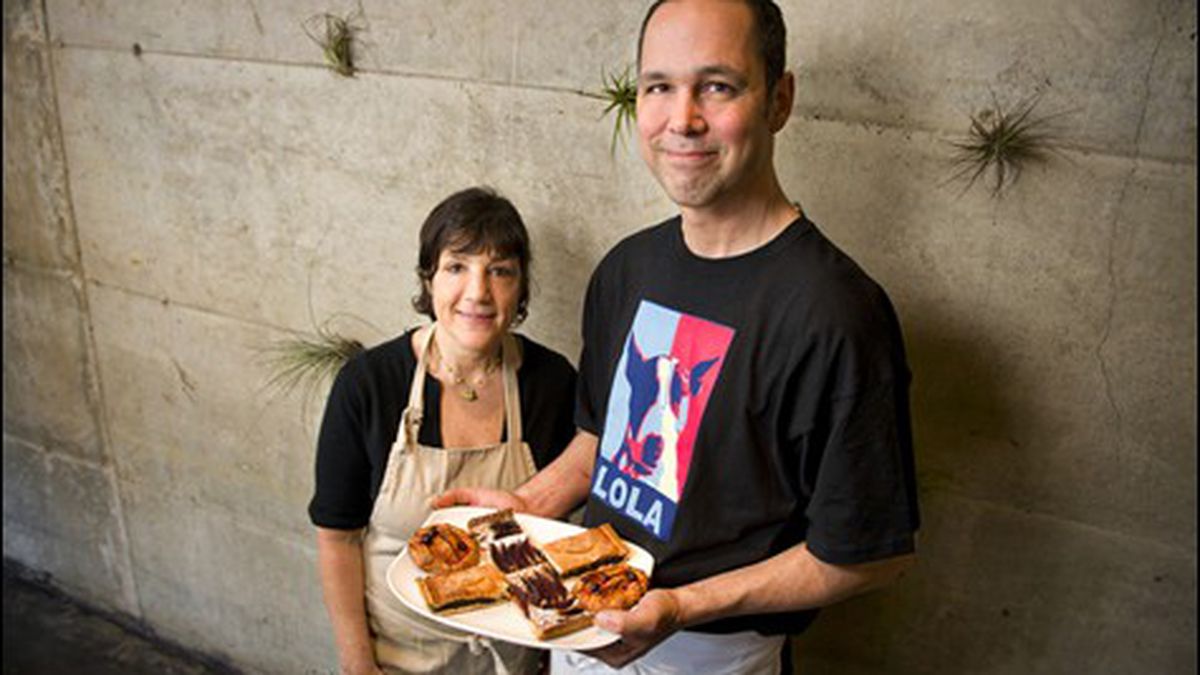 Safe rule: Never judge a museum on the quality of its food service. Museum cafes often have the drab aesthetics of a hospital cafeteria, the muffin-and-salad menus of a lunchtime grab-and-go, and the inflated prices of an airport. When there’s nowhere else to eat, there’s little incentive to improve. Which is why it’s so refreshing to unearth Babette, a tasteful oasis inside the Berkeley Art Museum.

Babette, which took over after Remedy Coffee’s short-lived tenancy (Cafe Muse before that), is the first retail project of local chefs Joan Ellis and Patrick Hooker. If their names sound unfamiliar, it’s because they’ve spent the last decade off the mainstream grid, catering and being private chefs for moneyed clients — Google execs, etc. — here and in Silicon Valley. Ellis and Hooker had planned to open a high-concept restaurant/organic grocery/housewares shop in Temescal called Babette’s Table, but the BAM space proved irresistible.

The museum cafe received a modish revamp during the prior occupancy; Ellis and Hooker then softened Remedy’s sleek, über-modern design with touches of home. Large concentric light fixtures, resembling German art or set pieces from the movie 2001, now beam down on scattered flowers and succulents. A new set of cushioned lounge furniture complements a grid of angular tables and chairs. A stark cement wall is brightened with dozens of air plants. Even the Babette logo, a snappy mid-century throwback with Futura font and table-and-chair silhouettes, occupies that middle ground between minimalism and warmth. Perfect for a museum, no?

To gain insider perspective, I invited Alexis Coe, a museum acquisitions writer and former curator in New York, to lunch at Babette. Having spent more time in museums than anyone I know, Coe has ceased to expect anything besides base-level sustenance; even museums with world-class collections will often skimp on the food. She’s seen more than her share of shrink-wrapped sandwiches, unripe bananas, and crumbly muffins, plunked onto cafeteria trays from behind a sneeze-guard.

Coe came up with five basic requirements for a successful museum cafe. Here’s how Babette fared:

2) Doesn’t weigh you down. If mealtime lands midway through your museum visit, a heavy, carb-loaded meal is like strapping on a pair of lead boots. Coe suggests protein-packed sustenance that won’t make you logy or slow your roll. At Babette, a Becker Lane bacon sandwich, served with roasted red peppers, arugula, and aioli on a toasted Acme torpedo roll, was served with a small hillock of delicious slaw. Or you could get a generous bowl of mixed greens, pear slices, walnuts, and Point Reyes blue cheese, served under a house-made shallot/red wine vinaigrette. Babette’s rotating menu features items like these, well-suited to jettison you back into the galleries.

3) Power sweets. Sometimes, in lieu of real food, Coe craves a quick, sugary jolt to jack up her energy — a cupcake or cheese Danish will do the trick. Babette’s baked goods selection was a little frou-frou to fit the bill; items included a rosemary fig puff pastry with a sprinkling of sugar crystals, or a buttery apricot scone infused with masala spices. These items established Babette’s baking chops — Ellis ran a San Francisco artisan bakery in the Nineties — but they were subtle and rarefied, barely registering as sweets. Although I enjoyed them, a cinnamon bun might have been in order.

4) The perfect tart. Through hundreds of museum visits, Coe says tarts seem to be the universal thread at every cafe. This unassuming baked good now serves as her unofficial benchmark for comparison. We tried a savory tart, made from golden beets, olives, pine nuts, feta, and ricotta, an adept layering of ingredients on a flaky, butter-rich crust. Though it could have used an oven warming, it was otherwise flawless.

5) Soothing. After a few hours wandering through low-lit, near-silent galleries, Coe often wanders out in a trance. She needs a mellow reentry to the outside world, without loud noises or erratic motion. Babette is the perfect transitional space: As diffuse, tree-filtered sun peeks through the long front windows, Elvis Costello and Tom Waits play on the turntable (real records!). Tranquility pervades the space; it’s easy to find excuses to linger.

Babette clearly nails most of these criteria for a successful museum cafe. But here’s the kicker: Thus far, most of Babette’s patrons have not come from the museum. With its own entrance facing Durant Street, you don’t have to walk through the BAM lobby to enter the restaurant; many customers wander in from elsewhere.

Babette opens at 8 on weekdays, and UC Berkeley students have been filling its seats for well-prepared, down-home breakfasts — bacon, egg, and cheese sandwiches; steel-cut oatmeal with maple syrup, apricots, cranberries, and toasted pistachios; baked goods; and pour-over Ritual coffee. Weekday lunches have also been busy. But on the weekends, when art lovers pull on their sensible shoes for a jaunt through the galleries, Ellis said business is lousy. A theory: Is Babette so successful at bucking the conventions of its genre that people don’t know it’s part of the museum? There’s more than a little irony at play here.

A Brief Guide to Eating ‘Ethnic’ in the East Bay