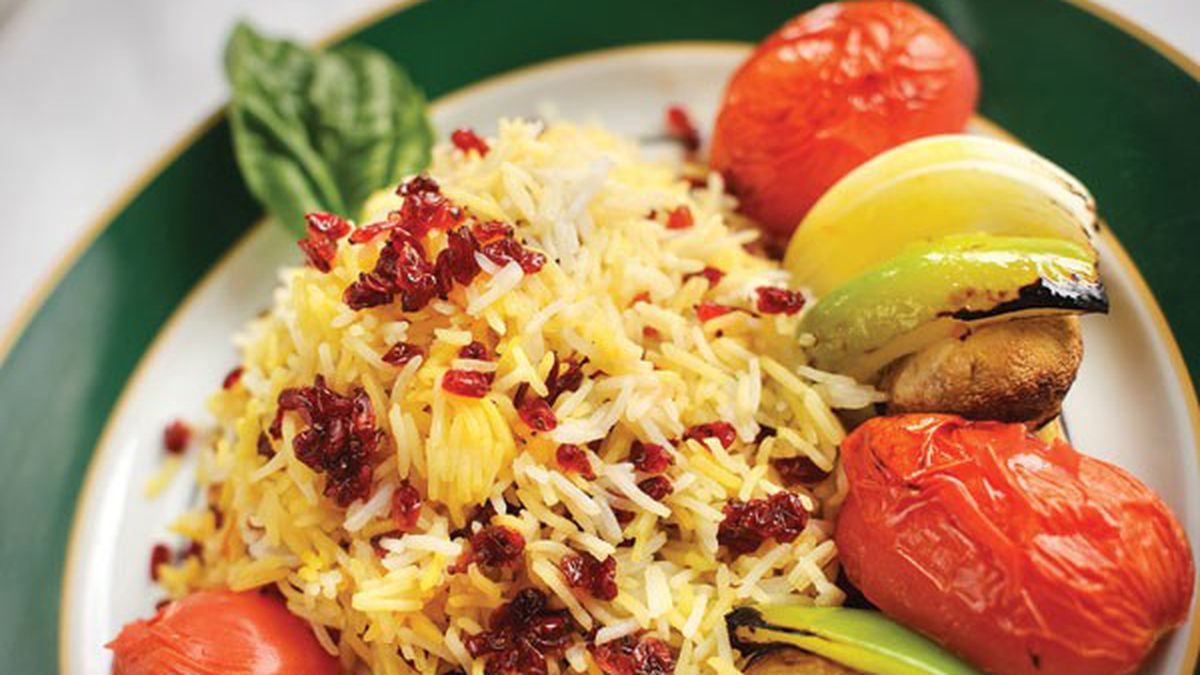 Azerbaijan Restaurant is a Polo Palace

Get a taste of civilization at Berkeley's Azerbaijan Restaurant.

The name meant nothing to me, save sparse flashes of a hot plain far away, somewhat Russian but somewhat something else, which once was Communist, where melons grow.

How many cultures and even whole countries exist in this world, each under its own separate sun, adhering to its private protocols, laughing at its own jokes, of which even after so many years in school I blithely know only their names, if even that?

Nestled on the Caucasus on the western shore of the Caspian Sea, Azerbaijan was part of Alexander the Great’s empire, then later became the center of various medieval Islamic empires. Its poets practice a form of throat-singing. Absorbed into the USSR after World War I, it gained independence in 1991. After a bloody war against its archrival Armenia in the early 1990s, the oil-rich country was divided into two discontiguous parts.

But still: What sorts of swimsuits do its people wear?

We tell ourselves we’re not provincial. We know what pupusas are. We collect world cuisines like bracelet charms. Tried for the first time, each of them is a Candid Camera of possible faux pas: another menu full of words you will certainly mispronounce; culture-specific table manners you do not know, and thus will shatter so grotesquely that you might as well be eating with your feet.

Azerbaijan Restaurant’s interior evokes dry heat, abstractly in pumpkin-colored walls and pumpkin-and-black floor tiles and specifically in a painting, spanning its entire western wall, of statues flanking a pond in a famous park. Other walls sport musical instruments and a tanned, painted, splayed animal skin. A samovar and hookah shimmer moodily. Moored to a black ceiling, a crystal chandelier glints. A small painting in the hallway leading to the restrooms depicts a tooled leather purse. These elements conjure no place I recognize. This inability to register, this empty database, hinders the foreign-food experience. To eat salade niçoise, say, or dan dan mien is to be transported to a France or China of the mind, all boulevard cafes and Monet lily pads and Tang-dynasty poems and Tiananmen: However accurate, cobbled from travel or TV, it makes food more than food, makes it a trip. Eating even the signal dishes of somewhere you’ve barely heard of is like eating in the dark.

It could be fictional, this pink-geranium-flanked realm of hookahs, chandeliers, and skins.

David Doran comes from that realm. His hometown, Tabriz, is one of the capitals of the larger Azeri cultural sphere. (Protests raged there this week, following the Iranian election.) Now the capital of Iran’s East Azerbaijan Province, Tabriz became separated from the rest of Azerbaijan after World War II. A veteran restaurateur, Doran also owns Alborz, the yummy Persian place around the block. He closed Orso, his Mediterranean restaurant, to transform its space into part of Azerbaijani Restaurant, adding a liquor bar and stage.

“When Persians enjoy the food at a Persian restaurant,” he says, “the first question they always ask is: ‘Is the cook from Tabriz?'” It’s a compliment, he says.

Azeri dishes look, feel, and largely even taste Persian, but tweaked, Doran explains: more nuts, chickpeas, tomatoes, potatoes, saffron, fried onions, and fresh and dried fruit: “Little things make a difference.” As in the fesenjoon, the pomegranate-walnut stew that is the Caucasian answer to mole sauce, a little sweeter and a little smoother here than in typical Persian restaurants. As is the albaloo polo, saffron-sour-cherry rice.

Azerbaijan reveres rice, as this place proves. Heck, it’s polo heaven. Every butter-swathed basmati grain is lithe, distinct, and fluffy-light. Choose baghali polo, with melt-in-your-mouth baby lima beans and lots of dill. Or zereshk polo, with saffron and sweet-sharp red barberries. Or, best of all, tears-in-your-eyes shirin polo, with saffron, raisins, preserved orange peel, pistachios, and almonds. Elegant enough to eat alone, these polos are over-the-top sops for stews such as khoresht havij, whose leg of lamb, dried plums, and slivered carrots make it distinctly Azeri. So do the barberries, dried plums, boiled egg, fried onion, and saffron in the jumbo koofteh tabrizi meatballs. Other entrées include kabobs, served here without sticks. The generous vegetables in ours were cooked to singed-but-sweet, bursting-with-juice precision. That said, the chicken in the fesenjoon was dry. (Lamb shank is king in Azerbaijan, but vegetarian versions can be made of more than half of the dishes on this menu.)

“Food is the most important part of Azeri culture and life,” Doran says. “So everything we use” — in his homeland and in his restaurant — “is fresh, never frozen or artificial.”

In-your-face fresh is paneer sabzi, a plate of feta, walnuts, and tiny black olives ringing a tall tangle of raw basil, mint, cilantro, tarragon, and parsley. Bright and bitter by the forkful, it’s a challenge: herbs eaten not just as seasonings but as the main ingredient. The tarragon makes it Azeri, Doran says. Balancing its bitterness are chewy flatbread and mast — thick yogurt studded with cucumber — which comes free with meals. Herbs star again in koo koo sabzi: Chopped in massive quantities, parsley and dill and cilantro are baked with nuts, raisins, and just enough egg to create a dense pie, served by the deep green, salty, and satisfying wedge. It’s a mazeh, an appetizer, but it deserves more dignity than that. So does kashk bodemjan, a transformative sludge of roasted eggplant crowned with walnuts, fried onion, and whey, a cheesemaking by-product that sounds gross however described but whose thick indulgent tang triangulates so cleverly with the other ingredients — the silky and the smoky and the bitter and the sour — as to prove that this dish could never have happened by accident, as in Whoa, look what fell into the pot. Rather, like the many other offerings here whose names I cannot pronounce, this soft buttery bequest of a lemon-growing land whose clothes and TV shows I cannot picture, this dish is clearly the work of years: of concentration, imagination, sophistication.&#8;

Which is otherwise known as civilization.