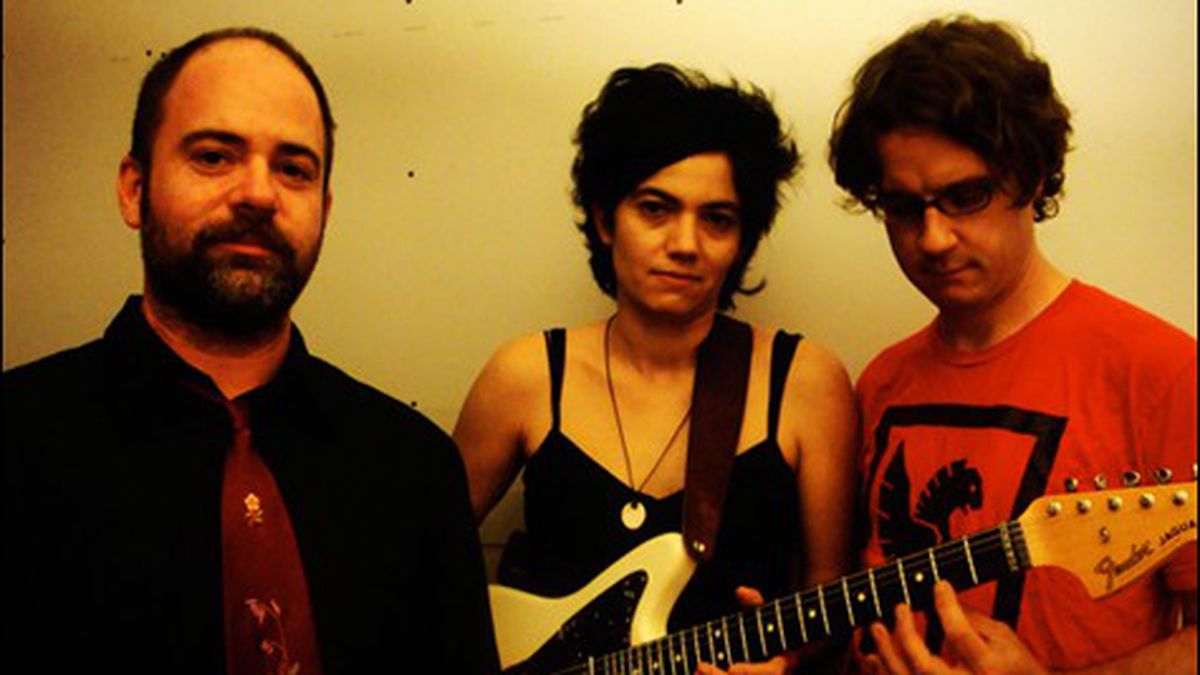 The experimental guitarist dabbles in the difficult realm of free jazz, but grounds it in a warm humanity.

It’s a bustling Sunday night at Bar 355, and Oakland guitarist Ava Mendoza is leading her avant-garde trio Unnatural Ways through a particularly exhausting section of music, when suddenly, Dominique Leone’s keyboard cuts out. He glances at drummer Nick Tamburro, who fiddles with Leone’s amplifier while maintaining a frantic rhythm single-handedly. Tamburro remedies Leone’s synth, Mendoza stares at each player, grins, and the group intuitively restarts the section. That knowing smile is signature Mendoza — she’s made an art out of improvisation.

Unnatural Ways had just returned from its European tour, and the group was clearly tightened by rigorous nightly performances. The stylistic breadth of Unnatural Ways’ material lent the set a thrilling unpredictability: Clamorous cymbals gave way to an R&B beat beneath Leone’s keyboard solo, but suddenly the track spiraled into tonal dissonance and Mendoza throttled her guitar strings with a screwdriver.

There’s grace and ease in Mendoza’s experimental sound. At Bar 355, she didn’t pander to the crowd with banter or engage onlookers with a forced smile. Her gaze moved from Leone’s fingers to his focused expression and back to her instrument, then quickly signaled a change with her guitar neck. Mendoza’s virtuosity is staggering, but more important is her ability to make expressive guitar work meaningful to the audience. Her fans span the gamut from academic experimental music aficionados to guitar virtuoso sycophants to followers of progressive rock and free jazz. And the kinds of venues she plays are just as diverse: “I’ll play a squat one night and a high-brow jazz venue the next and what I do doesn’t fit in either,” she said.

Mendoza began playing music as a teenager in Los Angeles. She asked Wilco guitarist Nels Cline for lessons after seeing him perform in The Geraldine Fibbers. “We met up once a month to listen to records, talk about music, and play a little bit,” she recalled. At the time, Mendoza studied classical guitar, but she started experimenting at Mills College, from which she graduated in 2006 with a bachelor’s degree in Intermedia Arts. Resting firmly in Mills’ lineage of progressive music, she wed electronic experimentalism with her lifelong love of guitar by using a pedal board and a broad sonic palette.

After graduating, Mendoza toured exhaustively with other bands. “When I got out [of Mills], I thought I would do anything for music,” Mendoza said. “I wanted to tour all of the time. I thought, ‘I’ll die for music.'” She formed high-brow post-punk group Mute Socialite in 2006 with avant-percussionist Moe Staiano, and later played in his group Surplus 1980, which also showcased jarring rhythm and guitar histrionics. Fred Frith, a Mills’ faculty member and founder of experimental rock group Henry Cow, included Mendoza in a special performance of his landmark 1980 LP Gravity at Slim’s last year.

With every project, Mendoza was developing a sound for what would later become Unnatural Ways. “I learned a lot from these collaborations, but developed ideas that couldn’t be realized in them,” she said. Mendoza met drummer Nick Tamburro at the San Francisco Rock Project, a nonprofit music school where she teaches kids to play songs by Captain Beefheart, Deerhoof, and Cline. They began performing as a duo, but she explained that, “a year later, Dominique [Leone] showed up at a show and said he wanted to play bass.” Leone ended up on keyboards, completing the Unnatural Ways trio in early 2012. “What I do now is in this little bubble between a few different genres,” Mendoza said.

As such, she has collaborated with tUnE-yArDs on a live score for several Buster Keaton silent films at The Castro Theatre last year, which they also performed at Bonnaroo, and has shared the stage with such notable musicians as Carla Bozulich, Weasel Walter, and Mike Watt. Cline also champions her work: “Could this be some skilled, overlooked master …? It would be easy to think so,” he wrote in the liner notes of Mendoza’s 2010 solo album, Shadow Stories.

Despite her formal training and music studies, Mendoza evades academic elitism and discusses music without pretense. Her performances are distinctly expressive and evocative, relying much on the art of improvisation.

Even her most experimental songs are grounded by a warm humanity that she traces to her interest in Sixties and Seventies free jazz, which strove for spiritual vitality through rejection of conventional musical forms.

“For me, abstract music is rooted in free jazz: Albert Ayler, Ornette Coleman, Sonny Sharrock,” Mendoza said. “They were about expressing things that can’t be expressed in not-free music and that’s my attraction to it.”