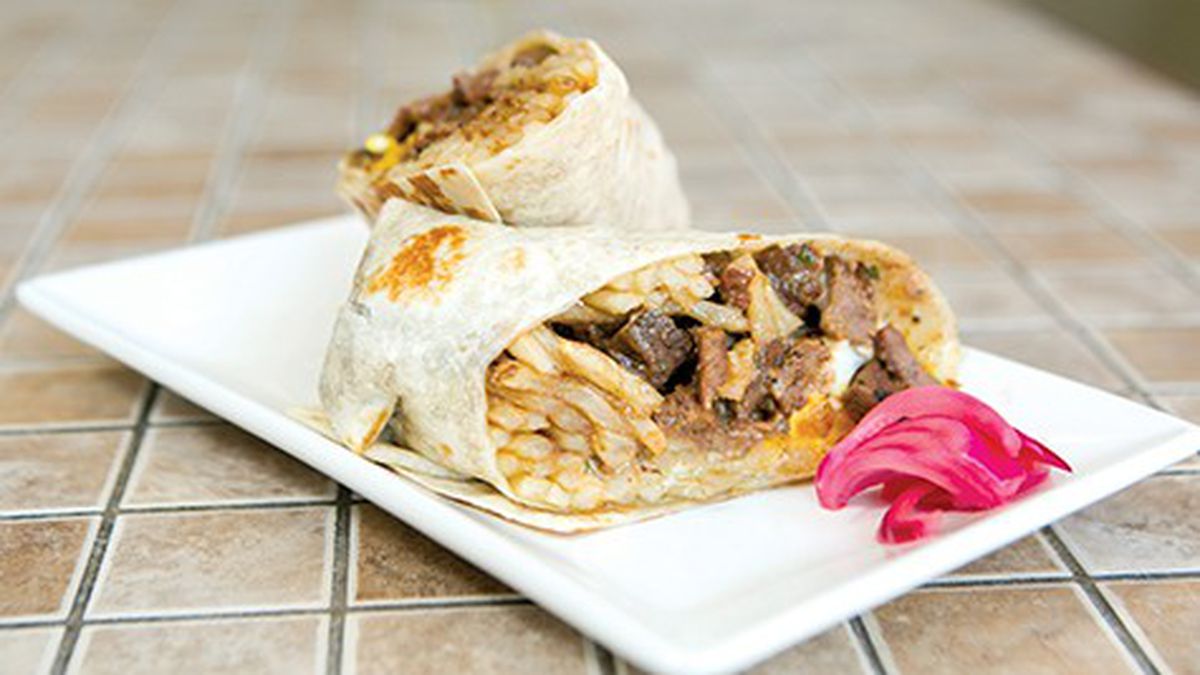 At Belly in Uptown Oakland, the California-Korean Burrito Comes North

Here's hoping fries-in-burritos is a trend that's here to stay.

When Alice Woo and Alan Chun moved from Southern California to the Bay Area, one of the things they missed most was the Korean tacos popularized by Los Angeles food-truck pioneer Roy Choi in the late aughts. Choi’s gochujang-infused tacos effortlessly fused his fine-dining background, a youth spent largely in LA’s Latino neighborhoods, and unapologetic use of the Korean pantry’s funkiest ingredients.

This kind of Korean-Mexican fusion cuisine made inroads in the Bay Area years ago, if mostly only at food trucks and student-oriented spots. Chun and Woo wanted Belly, their new Uptown Oakland restaurant, to be more ambitious, in terms of food quality — but not so ambitious as to be above offering all-you-can-drink Pibb Xtra and heaping mounds of French fries.

Chun, who worked front-of-house jobs in the Los Angeles area for years, developed most of the recipes, though Belly also recently hired a new chef, Alex Ripley, who is slowly expanding the menu and adding weekly specials. The restaurant sits in a bright, airy space that’s modern-looking and very SoCal — but it still retains a homey, mom-and-pop feel. The marinade used for the steak is Chun’s mother’s recipe — a mixture of puréed Asian pear and onions, garlic, scallions, soy sauce, and sesame oil that’s similar to what you’d use for bulgogi, the thinly sliced beef served at Korean barbecue restaurants. And the service is about as friendly and attentive as you’ll find at a casual, step-above-fast-food kind of place. Every few minutes, Woo, who runs the front of the house like a sunny-mannered force of nature, swooped over to our table to clear away dishes, or offered a little tub of salsa or a few extra napkins.

Aside from Korean taco trucks, Chun was also inspired by the California burrito, a staple at the taquerias of his native San Diego. These are stuffed with carne asada, French fries (or some other form of potato), and cheese — no rice and beans to clutter the experience.

Belly sells a semi-traditional version of this, the “Cali” burrito, which is only slightly Asianized: The steak is seasoned with the house-made Korean-style marinade. The burrito is also packed with guacamole, pico de gallo, spicy sour cream, and shredded cheese, and I was surprised at how well the nominally Mexican ingredients — with their tangy, spicy, and creamy elements — cohered with the mild sweetness of the beef.

But the restaurant’s tastiest variation on the steak-and-fries theme is the steak-and-eggs burrito: Korean-marinated steak, French fries, and a runny-yolked fried egg, plus a squirt of garlic aioli and chipotle aioli. Every component of the burrito worked together just so: The crisp-edged Korean “carne asada,” which at first I found alarmingly sweet, was balanced by the savory richness of the runny egg yolk. (The egg, too, was somewhat Asian-inspired, adhering to the rice-bowl hawker’s credo that, as Woo put it, “Everything tastes better with a runny egg.”) The fries were high-quality — very thin and crispy, similar to what you’d find at a good French bistro — and added a delightful textural contrast to every bite. Even the flour tortillas Belly uses were uncommonly thin, with none of the gummy texture I find unappealing in so many burritos, and were sealed shut on the hot griddle to add another element of crunch.

At $12, this was the priciest item on the menu — and make no mistake, a $12 burrito is an expensive burrito by any standard. But it was also the most satisfying burrito I’d eaten in months. (You can get a combo meal that comes with a soda and fries, but if you’ve picked a burrito with built-in fries, this may be overkill.)

Not every dish at Belly was quite so harmonious in its construction. A pork belly burrito hewed more toward Asia, with sweet-and-spicy cubes of roasted pork, a sesame slaw, and seasoned jasmine rice — but the slaw didn’t make much of an impression, and the rice had the unappealing starchiness of supermarket sushi rice that has sat for too long in the fridge. The Belly Burger came stacked high with an onion ring, sautéed mushrooms, pickled cucumbers, garlic aioli, kimchi aioli, cheddar cheese, and a beef patty that had been marinated in more of that Korean barbecue sauce. But while the burger positively squirted with juice, even with all those components it was strangely lacking in flavor: The meat needed more salt and more char from the grill.

Every burrito on the menu is also available in taco form. And while there’s a certain novelty to having French fries on a taco, many of the ones I sampled were overly complicated: A fish taco with perfectly fried fish — as was the case with the tempura-battered tilapia in Belly’s “Surf” taco — is a gorgeous thing that doesn’t need much adornment. But here, the fish got lost underneath spicy slaw and too-generous dollops of sour cream, guacamole, and pico de gallo. Likewise, the shrimp and avocado taco was wonderfully fresh, but the batter-fried shrimp lost its crunch under the weight of multiple creamy elements. The tagline on Belly’s website is “The Art of Street Tacos,” but that’s something of a misnomer: These overstuffed creations were pretty nearly impossible to eat without a knife and fork.

Belly serves a fried-tofu taco and a few meatless salads, but in general this isn’t the kind of place where a vegetarian is going to have a ton of options. Still, if you’re looking for a healthier lunch, you could do a lot worse than the entrée-size salads. I liked everything about the throwback Chinese Chicken Salad — shelled edamame, mandarin orange segments, clusters of candied almonds, strips of fried wonton wrapper, and gingery sesame dressing — except the chicken itself, which was quite dry.

Any restaurant that can put out a dish as delicious as that steak-and-eggs burrito is one I’m willing to give the benefit of the doubt. Most of the less successful items just needed a little bit of editing. And here’s hoping that fries-in-burritos is a Bay-Area-by-way-of-San-Diego trend that’s here to stay.