.At AlaMar, The Sauces Are the Thing

For the Uptown restaurant's classed-up interpretations of the seafood boil, the plastic bib is optional. 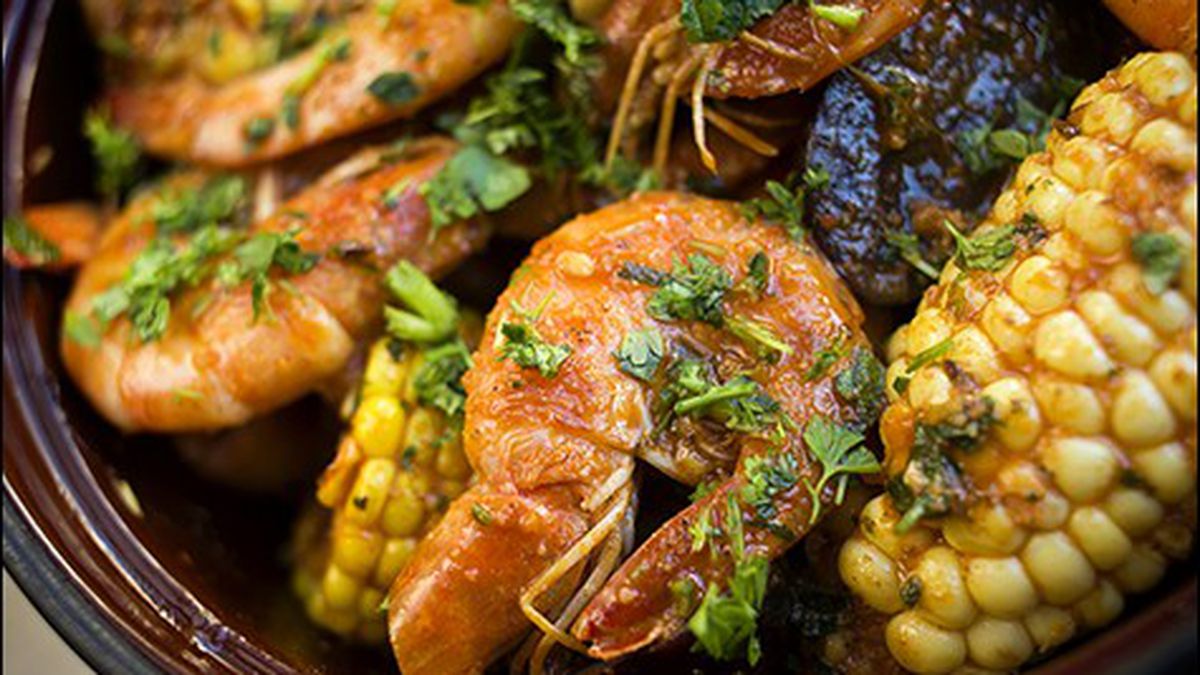 Nelson German would like you to know that his new Uptown seafood spot, AlaMar, is not an Asian-Cajun joint.

It would be an understandable assumption to make, given that the restaurant’s specialty — the seafood boil — tends to be the domain (on this side of Louisiana, at least) of Vietnamese-American restaurateurs. German, a New York City chef who moved to the Bay Area four and a half years ago, said he noticed the growing Asian-Cajun trend, and while he enjoyed the cuisine, he thought he could improve upon it with higher-quality ingredients and more precise cooking techniques.

The result is AlaMar, which German describes as “New American,” an umbrella term that chefs and restaurateurs usually use to indicate a diverse source of culinary inspiration — in this case, mostly the Mediterranean coast. Instead of using traditional Cajun seasoning, German uses fresh herbs and spices like saffron and smoked paprika.

The restaurant is a studied blend of high and low. Its nautical theme, which consists mainly of thick ropes that dangle from the ceiling, holding up old-fashioned Edison light bulbs, is just understated enough to avoid feeling tacky. There’s a hand-washing station in the middle of the dining room (a fun, but also utilitarian, touch in a restaurant where much of the food is best eaten with your hands), and a roll of paper towels at every table. Plastic bibs, standard neckwear at low-end seafood joints of various stripes, are available to anyone who wants them, though on a busy weekday evening, my table was the only one that took our server up on the offer.

All of the seafood, sold by the pound, comes in a black cast-iron pot, and every diner gets his or her own paper-lined tray to mitigate the cuisine’s inherent messiness — a far more elegant presentation than the typical plastic bags. Servers dutifully empty out the bucket of discarded shells before they pile up too high.

The differences between AlaMar and standard Asian-Cajun restaurants aren’t merely aesthetic. German doesn’t actually boil most of the seafood — except for the crayfish and (when they’re in season) the whole Dungeness crabs. For his take on peel ‘n’ eat shrimp, for example, German marinates big head-on shrimp for 24 hours, chars them on the grill, and then tosses them with sauce in a sauté pan.

At AlaMar, the sauces are the thing. Instead of the mix-and-match approach employed by most Cajun seafood restaurants, German creates a distinct sauce for each type of shellfish, using house-made compound butters rather than a generic Cajun spice mix. The sauce for the shrimp combined a rich shellfish stock, garlic, and a Romesco butter infused with smoked paprika, cayenne, and ground almonds. The combination — of well-spiced butter, garlic, and the umami-laden funk of the juices you can suck out of the shrimp heads — proved irresistible. Order some white rice to soak it all up.

Plump mussels, on the other hand, were served in a briny, saffron-based broth that was flecked with thick, chewy bacon lardons and slivers of Thai basil. Most of the time, the broth for mussels is all booze and garlic. Here, the flavors were more subtle, with just a hint of white wine, and were more satisfyingly savory.

My only complaint: the segments of corn on the cob that are served with every entrée. Despite being organic and grown in Brentwood, they weren’t sweet, and were just as soggy as what you’d get at any other run-of-the-mill seafood-boil joint. On the other hand, thick slices of grilled sourdough (from Oakland’s Firebrand Artisan Breads), generously replenished by our server, made for awesome sopping.

German shows his playfulness and fine-dining pedigree in the appetizers and side dishes. Perhaps the best deal on the menu is the oysters ($8 for a half-dozen), which are served raw on the half-shell, beautifully presented atop a huge mound of what looked like shaved ice but turned out to be salt. Each specimen came topped with a little pool of bracing lemon-sambal mignonette, crunchy diced cucumbers, and a scattering of pale-green cilantro-ginger “caviar” — the menu’s lone nod to molecular gastronomy. You sprinkle a bit of the salt on each oyster and then slurp it down, the cilantro balls adding a refreshing, herbaceous element.

A dish called “Dungeness crab poppers” turned out to be three balls of lump crab meat that had been breaded and fried. Despite the “popper” reference, there was no melted cheese, no jalapeños, and very little heat, though the tangy piquillo-anchovy dipping sauce was tasty. If you like crab cakes, you’ll like these. A side of tostones (smashed and double-fried slices of savory plantain), on the other hand, pointed to German’s Dominican heritage. These were nicely fried, though I would have preferred a dipping sauce with more oomph than the nontraditional tzatziki that German pairs them with. (Unlike at most Asian-Cajun restaurants, none of the dishes I tried at AlaMar were spicy, although German told me he makes a habanero-based hot sauce that’s available by request.)

Also drawing on the chef’s Latin background was one of a handful of non-seafood entrées on the menu: a braised oxtail dish based on a recipe by German’s mother. The meat, cut crosswise on the bone, was wonderfully tender, though the braising liquid was a shade too salty (though the tamari-based sauce, like much of the menu, is gluten-free). The addition of juicy, agave-sweetened baby turnips and soft-stewed cipollini onions helped balance out the dish, but I wished there were more of them.

The truth is, I love the kind of Asian-Cajun restaurant that AlaMar clearly isn’t. But the Bay Area has several places that do that kind of food well, and cheaply. AlaMar is notable, in part, because it’s so different. It also has reliably great service — it’s one of the few restaurants I’ve visited recently where someone always greets you the instant you walk in the door. That, along with those delicious sauces, is reason enough for me to come back soon.

Next ArticleMedi-Pot Rules Advance in Assembly