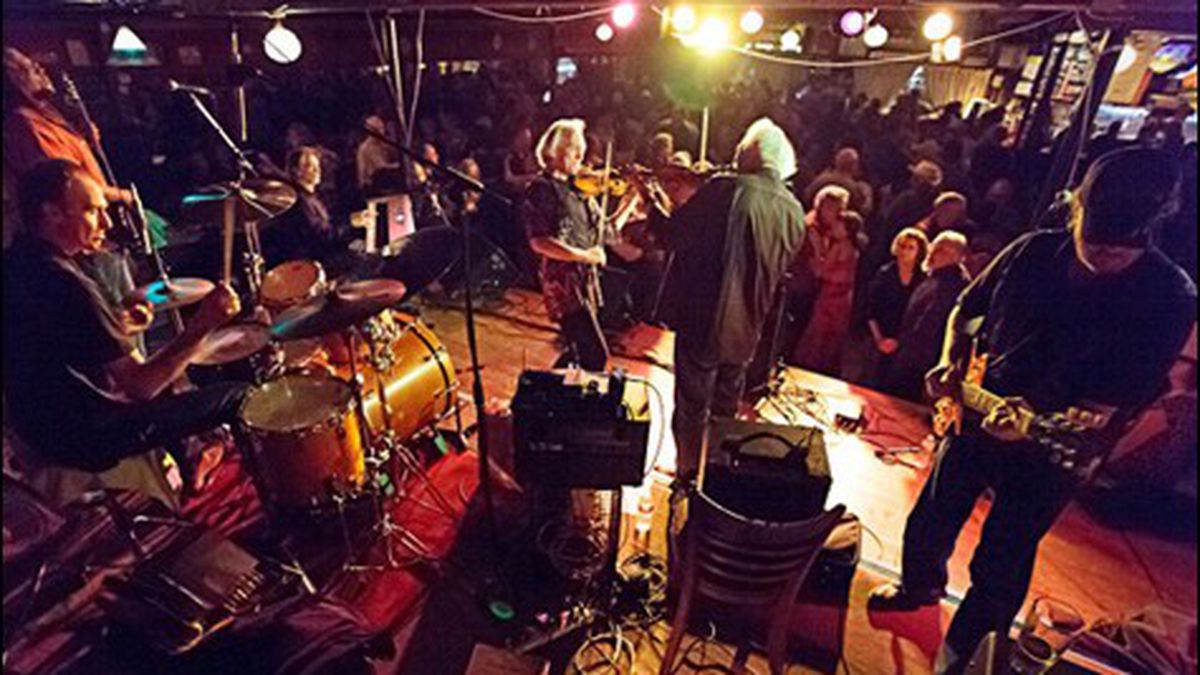 David Nadel never stopped believing. I first met him a few years after he founded Ashkenaz in 1973, before the Berkeley venue took off. The sparseness of the crowds in the club’s early days puzzled him — he said they’d come for belly dancing, to look at the women — but there was so much more to folk dancing than belly dance. With all the subcultures in the Bay Area — he mentioned the zydeco church dances in Richmond and the growing East Bay flamenco scene — he didn’t understand why Ashkenaz wasn’t more successful.

Three years later, Ashkenaz had become ground zero for the Bay Area’s world music movement, hosting African music, reggae, tango, klezmer, Cajun, salsa, calypso and soca, gypsy music, and more. When a disgruntled customer shot Nadel in 1996, we lost a real mensch, a man who walked the walk to fight for peace and justice. Thankfully, the community he built was strong enough to keep Ashkenaz going. This March, Ashkenaz celebrates its fortieth anniversary with ten days of special events, kicking off on Thursday, March 7, with headliner Mickey Hart, formerly of The Grateful Dead, and ending on Sunday, March 17, with the Non Stop Bhangra dance party. We asked the creative people who have played and danced at Ashkenaz to share their stories:

“I visited the Bay Area in 1984 with King Sunny Ade, and later in the band of Orlando Julius Ekemode. I stayed on, started a family, and founded my band Kotoja. Our first show was at Ashkenaz. It was a hit and we played there regularly. David [Nadel] asked me to start the West African Highlife Band because he fell in love with highlife music. Later, he encouraged me to revive my village folk music with a third band, the Nigerian Brothers. He promised he would always book us at Ashkenaz, and he kept his word. With that solid foundation, our music has thrived and been enjoyed far and wide. I will forever be grateful to David. He was a purist, an activist for the poor, and a lover of live music for dancing. After he passed away, the community worked hard to keep David’s wonderful legacy alive. Ashkenaz is my home base, and I will always love to play there, as long as I’m able.”

“We’ve been performing at Ashkenaz for almost fifteen years. It’s one of the great Bay Area venues, very down-home and comfortable. The staff is a joy to work with. They treat musicians with respect, and we love them all. Their bookings are diverse — African, Afro-Cuban, Balkan, blues, reggae, swing, zydeco — and contribute to the health of the roots and ethnic music scenes.”

“I played Ashkenaz regularly with Mississippi Johnny Waters. When I went out on my own, I talked to David about trying different configurations for a blues show. We put on an East Bay Blues Festival and that gave birth to the Harmonica Blowout. It was an annual event at Ashkenaz until David was killed. The first Blowout drew 150 people on a Sunday night, but he insisted that we do it again. David believed in roots music enough to bring in bands that would never have gotten a gig in the Bay Area. He’d give them a shot without thinking about making money. My wife first saw me at an Ashkenaz Blues Blowout. When we met a few years later, she said she remembered me from Ashkenaz. We’re still married.”

“In most Bay Area clubs, we had to play a couple of tunes before the audience warmed up and started moving. At Ashkenaz, the crowd was dancing from the first note. It was like playing a dance back home in Louisiana. We’re at our best in a dancehall like Ashkenaz, where we can interact with the audience. The crowd was ready to party and, by the end of the evening, people were on stage with us dancing or sitting in. David made us feel at home. The first time we played there, we asked him for some M&Ms. He didn’t like sugar, but went out and got us some. Every time we played there, he’d always leave a big bag of M&Ms in our room.”

“Only in Berkeley would someone dream up a Utopian nightclub. Ashkenaz has been a crucial cultural institution from the moment David started throwing folk dances. It was a petri dish where musical experiments were conducted — a cauldron of mixed races, ethnic groups, and belief systems united by dance. Ashkenaz provided a laboratory for the entire realm of music — not just the reggae, world beat, multi-culti strains that were nurtured over decades by the club — but the full expanse of the wide world of dance music. I don’t think there’s been an important new development on the local music scene that wasn’t incubated in some way at Ashkenaz. The club is the community center, a nightclub on a mission with a purpose, beyond selling a few drinks and making a couple of bucks.”

“I played Cajun music at Ashkenaz for years and was part of the core group that got Ashkenaz going again after David’s death. That was one of the most amazing experiences of my life. I’ve never been involved in such a gigantic undertaking with people that I didn’t know and with whom I didn’t have that much in common, except our belief in David’s vision of social dance as a way to promote world peace. [Eric Thompson and I] used to play every month with the California Cajun Orchestra. I’d look out and see people from different cultures and ways of life, who I knew held very different views on things like abortion or gun control and religion. They’d be embracing, literally embracing, and moving together on the dance floor. On some level, that kind of experience has got to be a humanizing one for everybody.”

“I made my professional recording debut at Ashkenaz in 1988, playing in Henry Kaiser’s band. The room felt like home with its wood walls, great sound system, and warm feel. David was ornery, but a mensch who put his money where his mouth was. He impressed me with his commitment to music and humanity and constantly put his ass on the line, bailing people out of jail, having benefits for any good cause. I do remember this device he had, a ‘sound tree,’ that would cut the electricity to the stage if the music got too loud, a concession to the neighbors who complained about the volume of the music.”

Tom Rigney, formerly of The Sundogs and now Tom Rigney and Flambeau:

“I played Ashkenaz in 1983 with accordion player Queen Ida, the first female zydeco bandleader. I still recall the excitement in the room as the band took the stage and we launched into our opening tune — a big, badass zydeco groove that grabbed the dancers and filled the room with the irresistible rhythms of South Louisiana. David was the first East Bay club owner to book The Sundogs. We played several shows there, building the foundation of a loyal and totally crazed dance crowd that followed us for years. I’ve worked the club almost every month in the years since; it remains one of the great local gigs for us. David valued community over profit, spirit over style. He offered me gigs before he heard my new bands because he felt that what I was trying to do as a bandleader was in line with what he did as a club owner: bring the community together through music — soulful heartfelt music, dance music.”

“In 1994, a group of my own didgeridoo students found a cause worth fighting for. The X-plicit Players are Berkeley activists championing their right to walk the streets much as Adam and Eve in the Garden of Eden. The Berkeley Police had consistently apprehended them for appearing naked in public. With legal pressure mounting, a benefit concert was planned. The X-plicit Players and Trance Mission — my quartet with Beth Custer, John Loose and Kenneth Newby — were on the bill. The community came out in droves, many of them leaving their clothes in a pile by the door in solidarity. The X-plicit Players, au naturel of course, opened with ‘Pressure Drop’ and played a ballsy set along with their legal team, dressed in suits, supplying the backline. This gradually devolved into a happening, somewhat unfairly dubbed a Groupus Gropus by a less-than-sympathetic friend who had brought some East Coast music biz bigwigs to check out Trance Mission. A mass of writhing naked bodies explored the surface of the dance floor. Finally, Trance Mission played and the crowd rose to their feet and flailed their jiggly bits to such classics as ‘Tunnels’ and ‘Chasing the Moon Rabbit.'”