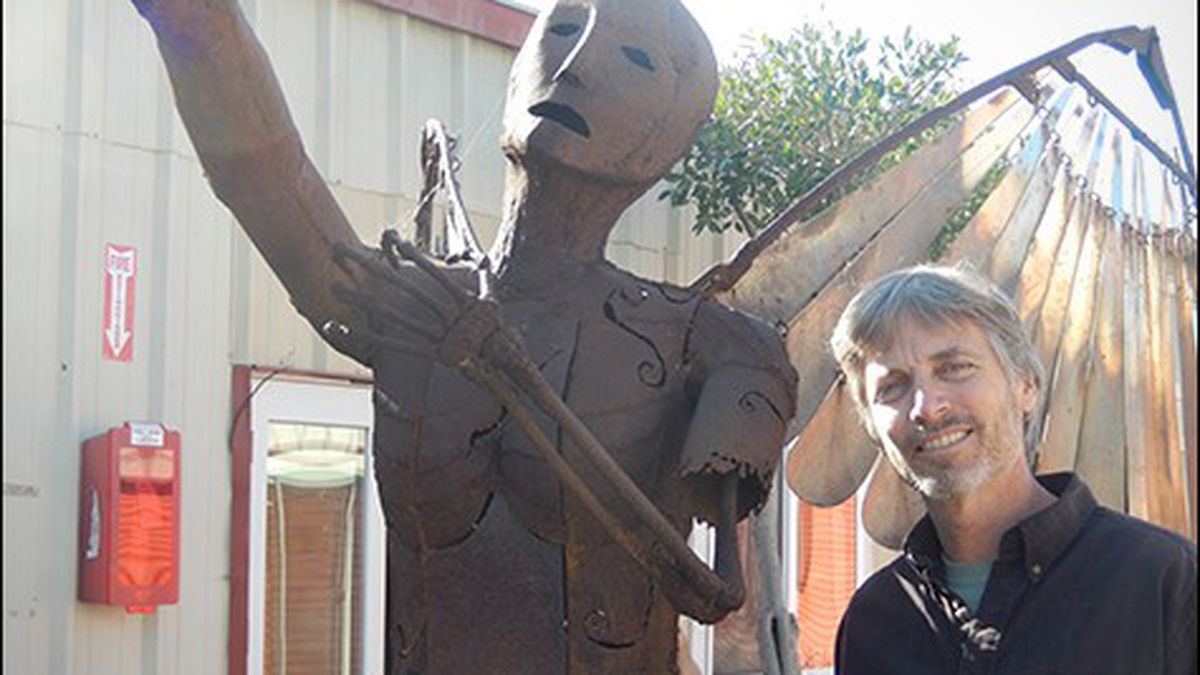 Artists at the Bridge Get New Life

The west side of Richmond’s Santa Fe neighborhood borders I-580, a barren industrial landscape, and a residential area long characterized by blight, drug dealing, prostitution, and violence. But at the dead end of Maine Street, a thriving artists’ community has come to life, and, with it, positive changes in the neighborhood.

About four years ago, business was flagging at Bridge Storage, a 580-unit self-storage facility that butts up against a train yard. The owners had grown tired of wringing their hands behind the facility’s gates, waiting for moneyed clients from Oakland and Berkeley to come store their belongings. They decided to make a change. The father and son owners, Jim and Jeff Wright, converted some storage units into art and music studios and offered them to local artists at affordable prices.

The Wrights changed the name of the business from “Bridge Storage” to “Bridge Storage and Art Space” and transformed 25 units into artist and musician work studios by adding French doors, skylights, insulation, and some plumbing. The converted studios leased out quickly and there is a now a long waiting list for the workspaces, which rent for $1.50 to $2.50 per square foot, according to Jeff Wright. The Bridge quickly became a focal point for artists to gather, barter, network, and inspire one another. The Art Space’s community room also became a popular spot for art showings and a meeting place for nonprofits, such as the urban farming group Urban Tilth and civic-minded organizations like the Santa Fe Neighborhood Association.

Painter Nashua Kalil, a retired transit planner, has leased a work studio at Bridge for about a year. She said being part of the community is inspiring. “You have a great private space to create and then you can just walk outside and you’re in a conversation about creativity,” she said. “We have dinners here with other artists from San Francisco and Oakland. We pollinate each other.”

The streets immediately around the artists’ community have undergone a transformation as well. “When we first built the storage units, this was sort of the hinterlands of Richmond — freeway frontage that was famous for buying drugs and self-storage facilities,” explained Jeff Wright. “The neighborhood has undergone a major change since we opened up to artists and musicians and I like to think we played a small part in that.”

But as the Bridge Storage and Art Space became more popular, it also caught the attention of Richmond city officials who threatened to close down the workspaces earlier this month because they had been built for storage — not as work spaces — and thus did not meet building or safety codes.

The artists’ community quickly mobilized and sent out emails and letters to the media and city council members. Mayor Gayle McLaughlin and Councilmember Jovanka Beckles asked City Manager Bill Lindsay to see if there was some way to avoid evicting the artists. “These kinds of evictions are terrible and too often it’s the artists who have to pay the price by moving out,” McLaughlin said. “We asked the city manager to try and find a positive solution that would allow the artists to stay in their studios.”

Lindsay arranged a meeting at the art space so that the facility’s owners, employees, and artists could meet with representatives from the planning and fire departments. After touring the facility, the city agreed to give the Wrights until February 1 to produce architectural plans for bringing the studios up to code.

“They have a good project. What they’re doing is tremendous, but just because you have a good project, it doesn’t mean you get a pass on codes,” said Planning Director Richard Mitchell. “But I think we’ve found a way through. We’re going to give them a chance to put together some plans to install heating, insulation, fire separation, and electrical service to get the studios up to code.”

Jeff Wright said it had always been their intention to comply with city codes, and over the next year he will invest all of the facility’s profits into upgrading the studios. “Our objective was to see if this could be a real businesses,” he said. “It was a new concept that took off. Not only is there a waiting list for the studios, but the storage units are full as well.”

Wright added that, eventually, he would like to convert up to a third of the storage units into art studios, although all of the financing would have to come from storage profits because banks usually won’t consider lending for art studio upgrades.

Linda Whitmore, who chairs the Santa Fe Neighborhood’s Business Outreach Committee, said Bridge has fit in well with positive changes that have been occurring in the neighborhood over the past few years. Crime has gone way down since a nuisance-creating liquor store on Cutting Boulevard closed and the area has been revitalized thanks to some new businesses that have opened. The Santa Fe neighborhood received another boost of confidence when Richmond Councilmember Jael Myrick moved his young family into the area.

For its part, Bridge has opened its gates, installed lights, and has regularly hosted events. The Wrights also purchased two homes near their facility that had been drug-dealing centers for years. They fixed up the properties and Bridge employees and artists now live in them. “We saw a difference as soon as we opened up the gates,” said Jim Wright who has been involved with the Santa Fe Neighborhood Association since he built the storage facility in the mid-1990s. “Instead of closing ourselves [off] from the neighborhood, we moved out into it and saw a change almost immediately.”

The economic impact artists can have on economically challenged neighborhoods is well documented — so much so that the City of Vallejo is actively inviting artists to install their artwork in the downtown area’s numerous empty storefronts. “The downtown is an area looking for a new identity,” said Vallejo City Manager Dan Keen. “Artists are a unique element that could create a draw for other people and businesses.”

In Richmond, McLaughlin said there is an effort in the city to develop live-work spaces for artists on a piece of public property near City Hall. “I know artists who have been priced out of San Francisco and now Oakland,” McLaughlin said. “Richmond is the next city in the Bay Area, and it’s really perfect. I would love to see Richmond become an enclave for artists because it would bring life to the area, which is what we want more of.”

The Flash and the Furious