.Art Out of Artifacts 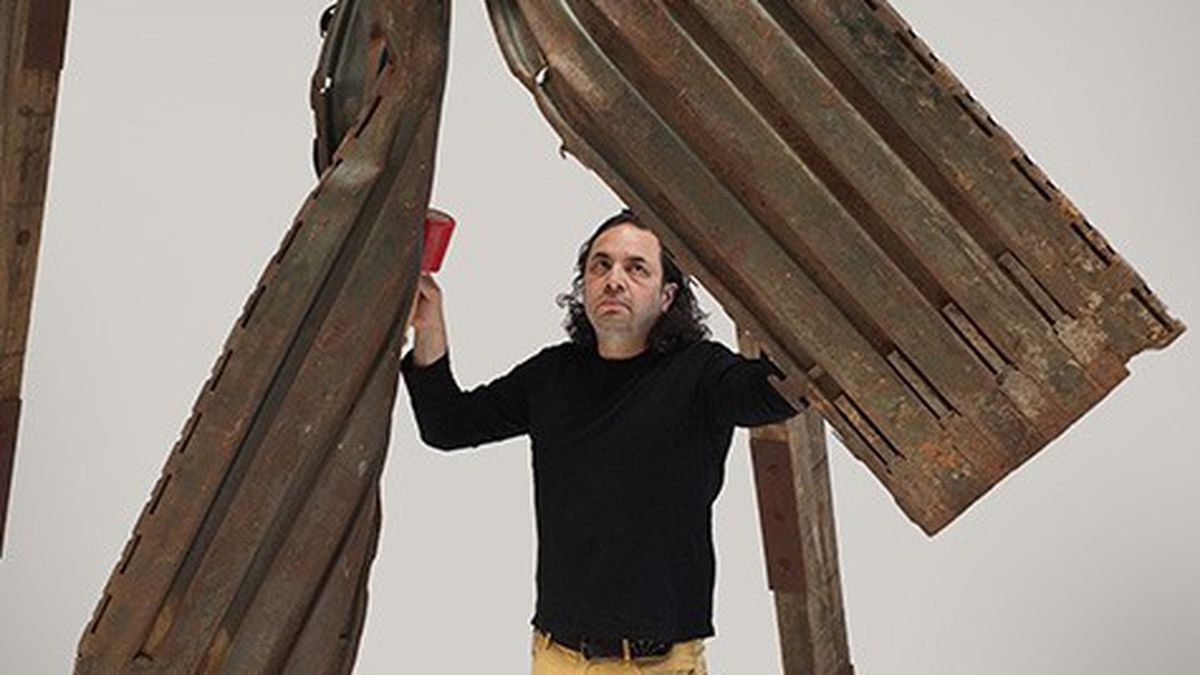 In 2011, the photographer Richard Misrach saw experimental composer and performance artist Guillermo Galindo play a five-minute composition using instruments made from migrants’ discarded belongings found near the US-Mexico border. The performance gave Misrach chills — and not just because he was moved by the music. Since 2009, the acclaimed Berkeley photographer, known internationally for his large-scale landscapes of the American West, had been focusing his lens on the 2,000 miles that run between the United States and its southern neighbor. Galindo’s ingenious instruments immediately reminded Misrach of similarly haunting objects that he had captured on film.

In the Southern California desert, Misrach had stumbled across agave sticks clothed with migrants’ discarded sweatshirts, pants, shoes, and hats. Clustered in arroyos and canyons, these human effigies eluded explanation. “I didn’t know if they were some artist’s project, or if they were warnings to migrants coming over the border, or protests against the Border Patrol,” said Misrach. Those desert scarecrows, along with the increased militarization of the border, prompted the artist to begin photographing the region and the objects he found there.

As Misrach listened to Galindo’s performance, he thought, “God, this has resonance.” Soon, a powerful collaboration was born: Misrach would continue to photograph the border’s towns, walls, and wilderness, and would send objects back to Galindo to transform into more instruments in his Oakland studio. The result of their artistic partnership, Border Cantos, is currently on view at the San Jose Museum of Art through July 31. You will not find photos of migrants slogging through arid landscapes in the show, nor people wading through the Rio Grande with black trash bags in tow. In fact, you won’t see many people at all. Instead, the exhibit, like the work that brought the two artists together, uses the disembodied evidence of migration to evoke the border’s human toll.

Back in 2004, before he seriously turned his attention to the region, the first border-related object that caught Misrach’s imagination was a blue barrel with the word “agua” stenciled on it in white letters. He photographed the barrel in its dusty, barren landscape. Next to it, what remains of a disintegrating blue flag hangs onto a thin pole. It wasn’t until years later that he learned that the barrel was one of many bottled water stations that humanitarian organizations have installed along more than 250-square-miles of the border. The large format photo opens the show in the main gallery. The work is life-size and so vivid that it seems possible to approach the barrel for a drink.

In a nearby outdoor space, Galindo has taken one of these water tanks and created a sculpture titled “Fuente de Lagrimas,” or “Fountain of Tears,” in reference to water stations that have been shot by vigilantes and Border Patrol agents. Plastic tubes protrude from holes in the barrel’s sides. Water drops thrum on a sheet of metal below. The sound resembles that of rain on a rooftop or a crowd of people running.

Much of the exhibit intentionally steers clear of standard photojournalism tropes, and instead uses beauty — both visual and auditory — to stop visitors in their tracks. Striking photos of the wall hang in the main room. Vast portraits of Corten steel walls curve like arched Richard Serra sculptures as they weigh on the backs of rolling hills or cut smooth lines through an expanse of chaparral. In another, a grid of photographs document the wide range of items that Misrach finds on the ground near the border, from treasured items to trash: rusted tuna cans, a child’s tennis shoe, an old letterpress edition of Doctor Zhivago in Spanish, a child’s bible engraved with a heart, girl’s tweezers.

“Every single one of these personal belongings has an incredible story of a human being. The journey that they took is all embedded in there, but there is no way that you can actually transcribe that,” said Misrach. “What we’re trying to do is evoke a different way to experience the border and to think about it. More of a meditation, if you will.”

If Misrach is attempting to slow people down with the formal beauty of his images, Galindo goes even further with his site-specific sound installation, “Sonic Borders,” located in a gallery across from the main space. Based off of the Aztec’s Venus calendar, which is 260 days long, the composition is four hours and twenty minutes long, or 260 minutes.

“The composition invites people on a journey,” explains Galindo. “And the time each person spends in the gallery is their own journey. … It’s designed for that. It’s the experience of the migrant.”

The room holds eight instruments that Galindo built to play the piece. In one corner, sits a wooden drum, carved to resemble a mountain pass and to sound like a teponaztli, or Aztec slit drum. Another instrument makes use of a variety of detritus, including metal cans, a plastic cup, glass bottles, piano keys, and Border Patrol ammunition boxes. In another corner, plastic water jugs filled with gravel act as rattles when shaken.

“In my photographs, those personal belongings are just objects on the ground,” said Misrach. “Then Guillermo takes them, and suddenly sound is coaxed from them. It’s a transformative process for the imagination.”

In a year of heated political rhetoric and demands to build a wall along the entire length of the border, the exhibit feels particularly timely. “In general, the politicians who are talking about this — on both sides — are just using the issue as a football, throwing it to one another just to gain power and votes,” said Galindo. “But as artists, we have the fortune of being able to speak in another language.”