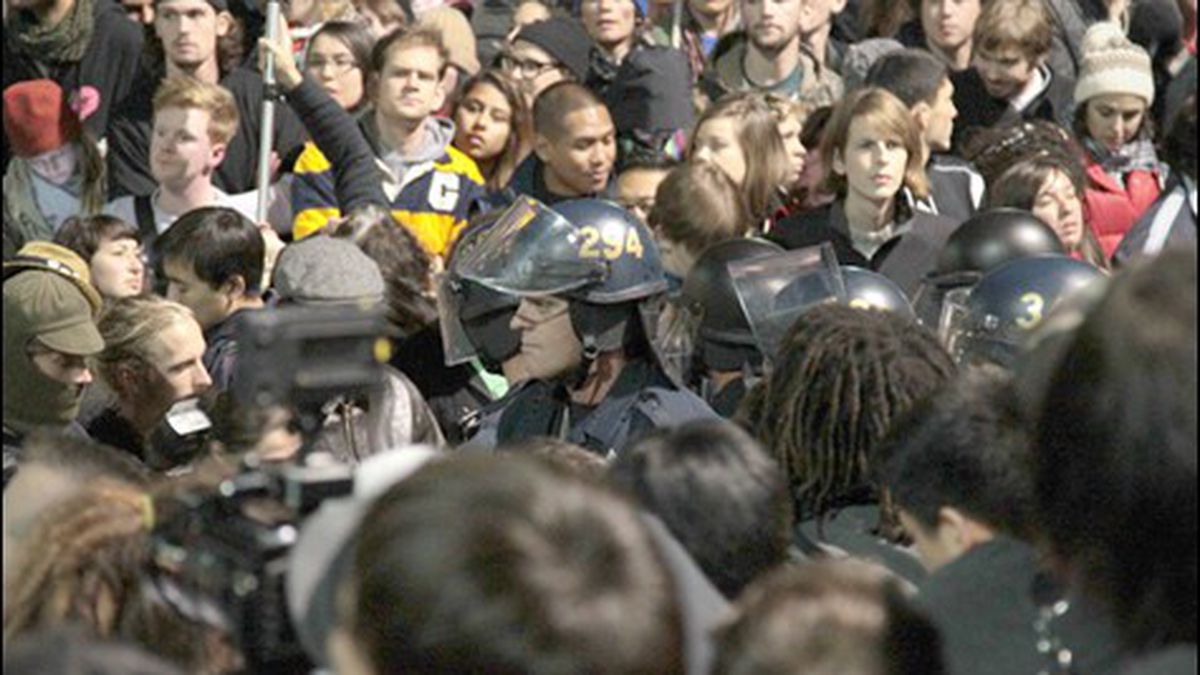 Some legal experts say they are — when used as a weapon against nonviolent protests.

Protests and UC Berkeley have been synonymous for the past half-century. It thus came as little surprise that one of the most visible clashes between law enforcement and students participating in Occupy Wall Street-affiliated demonstrations took place on Sproul Plaza. On November 9, officers from the UC police and Alameda County sheriff’s departments struck demonstrators with batons and arrested 39 people, all but two of whom were students, in a video-recorded melee that aired nationwide. The November 9 confrontation and the pepper-spraying of nonviolent protesters at UC Davis later that month raised criticism of UCPD to a fever pitch and prompted independent reviews of both responses.

But the repercussions from last fall’s chaotic protests have not been limited to police. Last week, more than four months after the incident on Sproul Plaza, twelve Occupy Cal protesters were charged with criminal offenses, ranging from resisting arrest and obstructing governmental administration to battery on a police officer. During pre-arraignment hearings for the dozen protesters in Alameda County Superior Court, Judge Paul Seeman took the additional step of granting stay-away orders that bar the accused from being within one-hundred yards of any UC property in the state. The only exceptions are for going to class or fulfilling employment-related responsibilities.

Since the New Year, Alameda County District Attorney Nancy O’Malley also has increasingly sought criminal stay-away orders against people arrested during large Occupy Oakland demonstrations. Following the mass arrest of 409 people in downtown Oakland after a failed attempt to take over the vacant Henry J. Kaiser Convention Center in January, O’Malley’s office sought and received stay-aways against a dozen protesters. The DA alleged that she was targeting people who had repeatedly been arrested at Occupy Oakland protests. In a February 19 op-ed in the San Francisco Chronicle, O’Malley wrote that stay-away orders have long been recognized by California courts as a condition of release from custody, and “serve a vital community need to keep the peace, avoid further criminal conduct and maintain safety in public spaces.”

Concerns about public safety have been cited repeatedly by Alameda County law enforcement to justify forceful responses to protests and civil disturbances over the past several months. However, attorneys for the Occupy Cal defendants say their clients pose no genuine threat to the public — as they committed no violent offenses on November 9 — and that the stay-away orders present an unconstitutional barrier to their rights to free assembly and speech.

“This is a situation where most of these people have not engaged in a pattern of protest,” Chazin told Seeman. In response, the judge said he believed that “enough of a showing has been made” to warrant granting a stay-away order against Saxby-Pinkerton from campus with exceptions for her course schedule and work as a graduate student reader in the Peace and Conflict Studies department. When Chazin pressed for specifics regarding evidence, Seeman said he didn’t “have time to do this on record.”

But some legal experts say the stay-away orders may be unconstitutional. Boalt Law School professor Jonathan Simon said there is a “very real concern that the stay-away orders are pretextual” and meant specifically to chill First Amendment activity. “Pretextual” refers to court restrictions that bar someone from a certain type of activity or speech before they have committed it. The US Supreme Court has ruled that such restrictions are unconstitutional. Citing University of Washington law school professor Kathleen Beckett’s book Banished, which covers the evolution of stay-aways, gang injunctions, and other similar legal tools, Simon said that most stay-away orders are issued in a criminal context where there is a genuine public safety concern and/or a body of evidence that supports the stated need for the order. Simon himself was arrested and charged with felony lynching (preventing arrest) in his student days at UC Berkeley as a legal observer during the anti-apartheid demonstrations in the mid-1980s, and was issued a civil injunction by UC lawyers barring him from protest activities.

The apparent lack of violence on the part of the accused demonstrators, Simon said, should be of concern for judges. And Seeman’s refusal to discuss the evidence for any of the stay-aways issued last week is, in Simon’s view, an “alarming unwillingness to have any kind of debate on the record.” Overall, he sees the Alameda County DA’s use of stay-aways against Occupy Cal protesters as reflective of concerns that Occupy Cal “would become an extension of a strong Occupy Oakland movement,” and is meant to serve as a “cold, calculating deterrent to students that this is what can happen if you step out of line.”

Attorney Jeff Wozniak, who represented graduate student Amanda Armstrong, also registered his objections to Seeman about the stay-away orders, which Wozniak maintains are a form of unconstitutional prior restraint. In a telephone interview, Wozniak said he’s also concerned that UCPD officers will “take advantage of the vagueness of the order to further harass Ms. Armstrong.” The rhetoric graduate student and head steward of the campus local of the United Auto Workers union has been active in anti-budget-cut demonstrations since 2009 and is an outspoken critic of the UC administration. In a police report from November 9 submitted as evidence for Armstrong’s misdemeanor charges of resisting arrest and obstructing governmental administration, a UCPD officer noted that he recognized Armstrong “from prior student demonstrations.”

Others students facing stay-away orders also have been involved in the anti-austerity movement at UC Berkeley, and face serious repercussions from the stay-aways. English graduate student Jasper Bernes, who lives in UC housing in Albany with his family, had to get a court order just to return to his home. Paul Davalos, a fifth-year student in sociology, was issued a stay-away order from campus during his pre-arraignment hearing on March 19 for charges of resisting arrest, battery on a police officer, failure to disperse, inciting a riot, and obstructing government administration.

Davalos, who took part in the November 2009 occupation of Wheeler Hall and a March 4, 2010 march against cuts to public education that resulted in 153 arrests, believes he was singled out for his past activism. Davalos says the stay-away order will also disrupt his job as director of the Bridges Diversity Center on campus, which brings hundreds of students of color to campus on recruiting trips. “When we don’t do our job making Berkeley attractive to them, the numbers drop,” Davalos said, pointing to the decrease in black and Latino enrollment at UC Berkeley since the 1990s. “This is exactly what I was out there fighting against on November 9th,” he said. “And instead of listening to our protest, I got beaten up and now I’m being charged for it.”

Chip Johnson in a Bad Mood