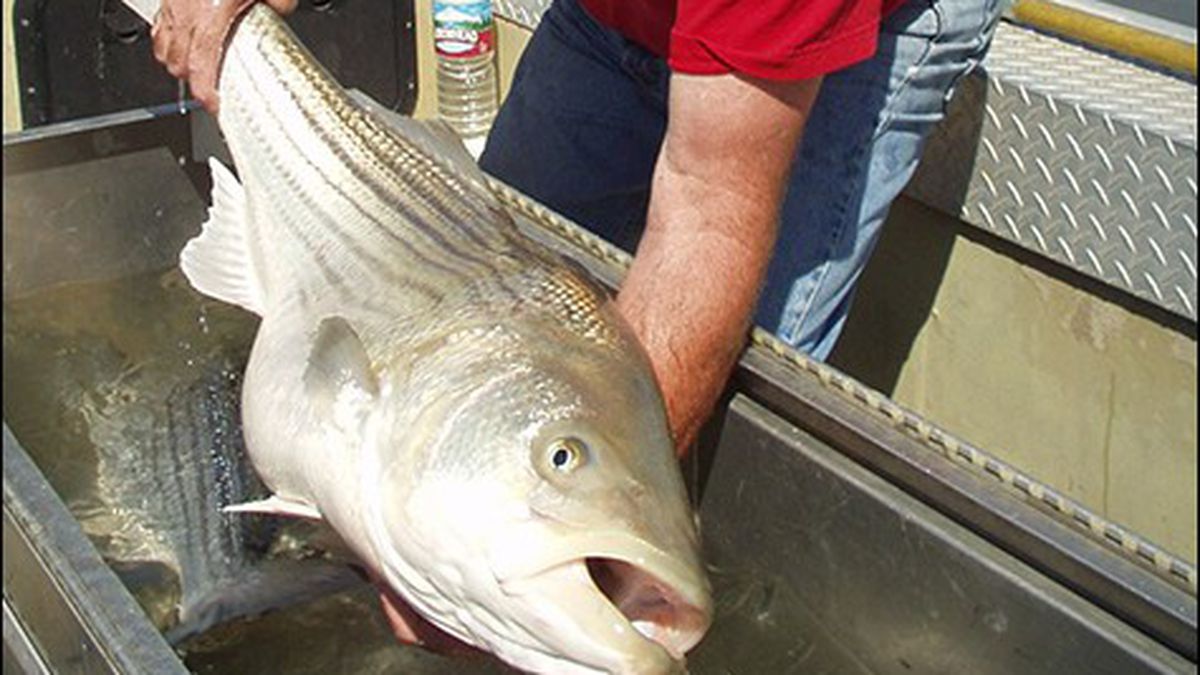 Another Fish Species on the Brink

Experts say the number of striped bass in San Francisco Bay has plunged dramatically because of the Delta pumps, which send freshwater to the arid San Joaquin Valley.

John Beuttler remembers when, in the 1970s, he could stand waist deep in San Francisco Bay, cast an artificial lure into the murky water, and begin catching large striped bass, one after another. “It was an incredible urban fishery,” recalled Beuttler, who works in Berkeley as a consultant to fisheries conservation groups. “Anyone could walk down to the water pretty much anywhere between Berkeley and Richmond and expect to catch ten or fifteen stripers in a couple of hours. And these were big fish. You could catch thirty-pounders from the beach.”

Such memorable fishing outings could be easily had throughout the 1980s and as late as the early 1990s, but no longer. Numbers of striped bass, often called stripers, have plummeted — possibly to all-time lows since the species naturalized on the West Coast more than 120 years ago. Scientists say the existing population may be as small as 5 percent of historic highs, and even diehard fishermen have given up trying to catch striped bass — once one of the most popular game fish on the West Coast.

The habitat in which striped bass thrived for decades has changed dramatically, according to scientists. “The decline is directly related to flipping on the switches to the state and federal water pumps,” said David Ostrach, a former UC Davis researcher who has closely studied striped bass reproduction and physiology. Ostrach is referring to the two major water pumps in the southern Sacramento San Joaquin River Delta — one built by the federal government shortly after World War II, the other by the state in the 1960s, which today remove about half of the Sacramento River’s freshwater before it ever reaches San Francisco Bay. The water is sent south to San Joaquin Valley agricultural interests and Southern California residents, and the health of the Delta ecosystem and its residents, Ostrach said, has suffered as a direct result. “Striped bass are an estuarine species, and because of the water exports, we no longer have a functioning estuary,” Ostrach said.

The pumps kill young fish either by directly sucking them up or by diverting the fish from the main stem of the Sacramento River and into remote backwaters and sloughs, where food and suitable habitat can be scarce, according to Peter Moyle, a UC Davis fisheries biologist.

But other reasons for the crash may be at play, too. Ostrach said numerous pollutants in San Francisco Bay — like DDT, PCBs, and various pesticides — have depressed the fertility of females while slowing the growth rates of the fish that hatch. In addition, the introduction of the Asian overbite clam in the 1980s spurred a striper nosedive as well. The teeming clams, Moyle explained, undercut the food chain by eating the microorganisms that feed opossum shrimp, which were once a major food source for baby striped bass. “The energy that once circulated through the food chain has accumulated in these clams, and the fish that people care about don’t eat these clams,” Moyle explained.

Despite the murky array of causes, there is clear understanding among scientists and fishermen that Bay-Delta striped bass are in serious trouble. Some believe the population has plunged from three million or more adults in the 1960s to less than half a million today. Ostrach thinks there may be only 200,000 adults left.

Striped bass are not native to the West Coast. They were introduced here in 1879 when 132 juvenile fish, transported by rail in sealed milk cartons, were released into San Francisco Bay. The predators found their place in the ecosystem, adapted, and soon flourished, spawning each spring in the Sacramento and San Joaquin rivers. Soon, the population reached its peak, in the millions — even supporting a large commercial fishery until 1935 and spreading into southern Oregon.

Most veteran fishermen agree that tremendous numbers of stripers thrived in the Bay-Delta ecosystem through the 1960s — but for sport anglers today, who may now legally take two striped bass at least eighteen inches long per day, there has never been a more frustrating time to try and catch striped bass. “This was the worst season we’ve ever had,” said Jim Smith, owner and operator of the Happy Hooker party boat, which is moored in the Berkeley Marina.

For more than forty years, Smith has taken paying customers onto the bay and sometimes beyond the Golden Gate to fish for stripers. In the 1970s and 1980s, Smith said, he could all but guarantee his customers that they would catch the maximum numbers of bass allowed by law. The fish were big, too, averaging nearly three feet long and about fifteen pounds, he said. During the best of times, feeding striped bass could be found in the surf at Ocean and Baker beaches, feasting on smaller fish in massive, surface-thrashing frenzies. Such events — once commonplace all summer long — provided fast action for fishermen casting from the shore, too. “But I haven’t done a beach trip like that in about ten years,” Smith said.

This summer, Smith said his boat rarely landed stripers much bigger than five pounds, and only three times did his customers — whose interest, he said, has tapered off — take home their legal limit of bass.

Jay Sorenson said he saw signs that striped bass abundance was declining more than forty years ago, prompting him to establish a fishing and conservation club called the California Striped Bass Association. The 77-year-old Stockton resident remembers visiting the lower stretches of the San Joaquin River in the spring of 1969. “In the evening light, you could look as far west and as far east as you could see, and the surface was just exploding everywhere with spawning bass, thirty-, forty-, fifty-pound fish,” he said.

That, Sorenson said, was the last year he saw such an epic breeding event. By 1972, he said, the same spawning sloughs were conspicuously quiet. Through the 1970s and 1980s, he watched the abundance of the species peter out — with the decline steepening about ten years ago, he said. In 2013, for the first time in his adult life, Sorenson said, he did not bother buying a fishing license.

Nobody knows if the Bay-Delta striped bass can be saved.

“If we keep managing the system as we are, it’s clear that the decline will continue, because almost all of the native fish species are declining, too,” said Moyle, who doesn’t believe sport fishing pressure is a serious stressor on the fish. He named Chinook salmon, Delta smelt, Longfin smelt, and Tule perch as a few other fishes struggling much the way that stripers are.

Dave Hurley, a Concord resident who writes a popular fishing report called The Hot Sheet, blames water diversions at the Delta pumps as the primary force behind the fall of the striped bass. The past decade’s especially marked drop in striper juvenile numbers — which are estimated each year by the Department of Fish and Wildlife — align with an average increase in water pumping rates.

Yet Hurley is becoming increasingly critical of fishermen themselves. “We have these big-fish derbies where fishermen kill the biggest striped bass they can to get a cash prize,” he said. Hurley said a fisherman in the Delta recently caught and killed three giant striped bass in a weekend — a 28-, a 42-, and a 52-pounder. “A long time ago, this was acceptable, but not anymore.” Hurley calls striped bass “survivors” and doubts the species will ever vanish entirely from San Francisco Bay.

But Beuttler feels that a culture and a way of life have already been lost. “It’s really like the end of an era when people quit fishing for striped bass because there are so few that you can’t even catch them anymore,” he said.