A Berkeley complex for low-income seniors has threatened to evict outspoken residents, raising fears about the potential loss of affordable housing. 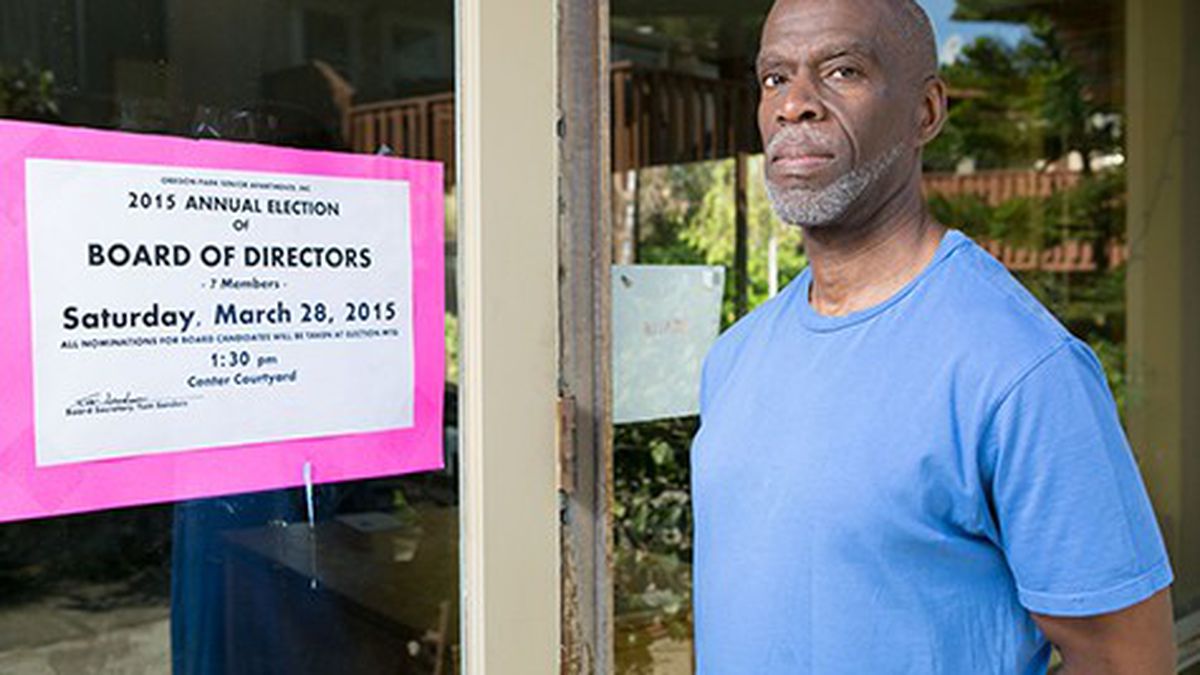 For ten years, Oregon Park Senior Apartments in South Berkeley has operated as a nonprofit cooperative for low-income senior citizens. That means the sixty-unit complex at 1425 Oregon Street is resident-controlled with tenants electing a board that is in charge of day-to-day operations. The complex provides a critical source of affordable housing — predominantly for people of color. But in recent months has suffered from a number of internal disputes and legal battles that have greatly threatened the stability of the cooperative.

While much of the conflict stems from an ongoing disagreement about the board leadership, housing attorneys said they were especially concerned about the board’s attempts to evict a number of outspoken tenants. Earlier this year, Ibrahim Moss, a management consultant, served eviction notices to at least nine residents — and subsequently filed eviction lawsuits against at least four of them, according to the East Bay Community Law Center, a nonprofit assisting the residents.

Brendan Darrow, law center staff attorney and clinical supervisor, who is representing five Oregon Park tenants, said the evictions were clearly retaliatory and violated numerous housing laws. Some of the three-day eviction notices — which tenants and Darrow shared with me — essentially informed residents that they were required to stop speaking out. The letters went to residents who had publicly criticized the board of directors about a number of concerns, according to Darrow and multiple tenants.

The notices from Moss informed residents that they had to stop organizing meetings aimed at unseating the current board; making any “false complaints to public officials, private entities, or any persons or institutions, that related to Oregon Park Senior Apartment’s Board of Directors, managers, contractors or any related persons or interests”; and presenting themselves as “member[s] in good standing” at the cooperative.

“The lawsuits were so blatantly retaliatory and designed to suppress free speech and public participation,” Darrow said.

What’s more, in separate court filings, Moss wrote detailed personal attacks against a number of the tenants he has tried to evict, calling one resident a “gross, if not vile and intimidating personality” and labeling another an “unemployed birdwatcher.” Moss wrote about the latter tenant: “While having no regular income, he has … manage [sic] to purchase a brand new hybrid automobile, enjoy lavish and extended vacations … and indulge in other luxuries. … Not bad for an unemployed man.”

What’s even more troubling is that Moss failed to cash the rent checks of two of the tenants who were sued by the board, Kevin Wiggins and Juanita Edington, and instead returned them to the residents, according to Darrow and those two tenants. In other words, as part of the eviction cases, Moss was accusing the tenants of owing rent, but was refusing to accept their checks, Darrow said, noting that this is an illegal practice.

The eviction notices also failed to include a phone number for Moss, which is legally required. For that reason, last week, a judge dismissed the four eviction lawsuits that Moss had filed against the tenants. But given that the Oregon Park board could re-file against these individuals at any time, tenants said they remained fearful.

“I [am] in shock and disbelief,” said Wiggins. “This is a member-managed property and we have every right to speak up. But they are suppressing our civil rights. … They wanted us gone.”

Reached by phone last week, Andre Nibbs, president of the Oregon Park board, declined to comment. In a series of lengthy emails to me, Katherine Wenger, an attorney representing the board, refuted the allegations made by Darrow and the residents, saying the board sought to evict tenants simply because they owed rent. She also downplayed the judge’s decision to throw out the eviction cases saying the ruling was based on “procedural issues,” adding that “these dismissals had nothing to do with the merits of the cases.”

Wenger further asserted that Nibbs never returned any rent checks and had instructed Moss to accept checks. Moss, she added, recently resigned, but she declined to say why. Moss did not respond to multiple emails from me last week. Wenger also contended that the retaliation allegations were false.

Darrow, however, argued that the sole reason Edington and Wiggins apparently owed rent was because Moss refused to accept their payments. The other two tenants whose evictions were dismissed had fallen behind on rent, but had longstanding written agreements in place establishing payment plans, which they were properly following, according to Darrow. He also pointed out that Oregon Park accounting records he reviewed showed that other tenants who had outstanding rent payments did not receive eviction notices. He said this further suggested that Moss targeted certain tenants specifically because they had been outspoken.

Residents who have criticized the board have a long list of grievances, court filings show. A group of them accused the board of appointing members without following proper election procedures; firing a bookkeeper and maintenance worker without getting required board approval; hiring Moss, the consultant, without board review or contract approval; closing the management office and shutting off telephone service; and denying residents the opportunity to participate in public meetings.

The board has denied those allegations, but the internal conflict has seriously threatened the cooperative’s operations. JPMorgan Chase, the bank that maintains Oregon Park’s accounts, recently froze the cooperative’s accounts as a result of the ongoing disputes and confusion around who has a right to access funds. The bank wrote in court filings that it has “reasonable doubt as to whether the current board was properly elected,” and noted that the board failed to provide any documentation confirming that it had hired Moss or that Moss had the authority to act as an agent for the cooperative.

It’s unclear what will happen if the bank and the residents can’t resolve the dispute — a Chase spokesperson declined to comment — but some fear the property could face foreclosure if residents and board leaders can’t reach a consensus and convince the bank to re-open the accounts. “We could lose our homes because the bank has foreclosed on it,” said resident Vic Coffield, who helped organize a protest two weeks ago in which he demanded financial transparency from the board. “We could lose this place, and it’s all because the board disappeared.”

The board, with Wenger’s assistance, has requested that the court appoint a so-called “receiver,” meaning a paid third-party individual to operate Oregon Park, but some residents told me they opposed this effort, because they want the complex to remain a resident-controlled cooperative. Tenants have organized a March 28 meeting at which they hope to elect new board leaders.

Earlier this month, at a resident-organized meeting — which drew dozens of tenants, though board leaders did not show up — residents said they were afraid that their funds were being mismanaged and depleted for legal fees.

“They are using our money to fight us,” resident Dale Anders told the group. Anders showed me a three-day eviction notice he received — he was not one of Darrow’s clients — and said it was clearly retribution for speaking up. “I did not deserve this,” he said, adding, “This is very stressful. I couldn’t sleep for a month.”