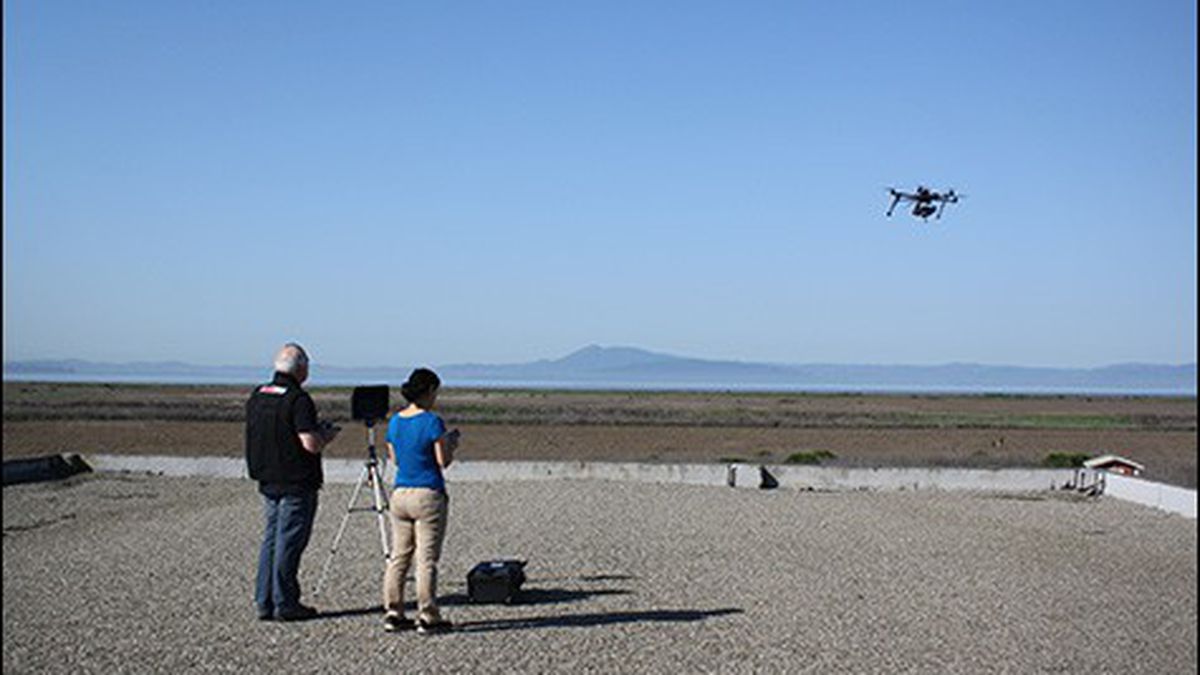 An Environmental Use for Drones

Last week, environmentalists, scientists, and techies teamed up to explore using aerial drones to collect ecological data that can otherwise be difficult to obtain.

The use of drones for aerial surveillance by some law enforcement agencies has come under intense criticism from civil libertarians and privacy advocates of late. But some scientists, environmentalists, and techies contend that drones can have practical and important uses: namely, to help researchers collect ecological data that can otherwise be difficult to obtain.

“It’s very hard to get some of the data sets in some of these areas that are remote or hard to reach in the marshes,” explained John Takekawa, a wildlife biologist for the US Geological Survey’s Western Ecological Research Center (WERC). “If you have something that can fly over and get sensors that can report back to your computer, that’s what we’re looking for in exploring these types of technologies.”

Last week, drones equipped with high-resolution cameras that can collect precise imaging data took flight from the USGS field station on Mare Island in Vallejo and flew over San Francisco Bay marshlands at the edge the San Pablo Bay. The experiment was organized by Nerds for Nature, a group of professional techies and ecologists dedicated to understanding and restoring the natural environment using new technology.

Takekawa has spent 27 years researching the bay’s ecology. He and his fellow WERC team study a variety of issues concerning wetlands and wildlife — including water salinity and avian influenza. He believes the best use of drones, however, could be to observe Bay Area sea levels related to climate change. The drones allow researchers to take detailed aerial images of inundated marshland during high tides and after storms, looking specifically at how particular plant species survive in the changing — and increasingly inundated — environment over time. “We’re trying to measure what it’s going to be like in the Bay Area in twenty, thirty years or a hundred years,” Takekawa said. “Sea level rise is a concern in the near future. This type of technology could help us to understand how the habitat can be affected by storms.”

The drones employed a number of imaging techniques, including infrared sensing, which is used to measure vegetation growth, and photogrammetry, a remote sensing process that stitches images into what is referred to as an “ortho-mosaic,” a highly detailed 3D model, which WERC researchers use to observe marsh inundation and tide levels. Currently, however, creating ortho-mosaics requires either researchers to do serious legwork or pilots and crews to run manned flights over an area of study, which are costly and can be dangerous due to low altitudes and challenging terrain. According to a study published in the Wildlife Society Bulletin, aviation accidents account for 66 percent of wildlife biologist mortalities related to field research.

But the flight for nature wasn’t only concerned with ecology; it also focused on drone development at large. Most of the drones at the test flight were designed for a wide variety of commercial applications, although the legal use of drones remains murky. The Federal Aviation Administration had effectively banned the commercial use of drones, but on March 6, a federal administrative judge ruled in the favor of Swiss businessman Raphael Pirker, who was fined thousands by the FAA for using his unmanned aerial system for profit in the United States. The judge said the FAA had overstepped its authority concerning Pirker’s business. The ruling blurred the line between drone and model aircraft, creating a legal gray area on commercial drone use until the FAA clarifies its regulations.

Some businesses, as a result, are wary of investing in drones. Kasey Allen, an analyst for an environmental consulting firm, said larger private firms should wait until commercial drones are completely legal before incorporating them into their operations. “Right now we’re learning and observing and waiting for the guidelines,” Allen said.

Besides legality, the pending incorporation of commercial drones into daily life raises numerous concerns about privacy and surveillance, especially when considering the detail that drones can capture. “It’s not so much the equipment but how it’s used,” said Ken McGary, an electronics engineer who is a member of Nerds for Nature and co-organizer of last week’s test flight. “We’re not interested in flying above people — but the same equipment can be sold to a police department for surveillance.”

In January, the state Assembly approved a bill that would limit how police and public agencies use drones. The legislation, AB 1327, would require public agencies to erase data collected by drones within six months, ban the weaponization of drones in California, and require law enforcement to obtain a warrant to use a drone.

Takekawa said his research group will continue to work with Nerds for Nature to explore how technological advances can improve Bay Area ecology. “Privacy issues might happen in human uses,” Takekawa said. “But in natural resource use, we might be a better choice to test this technology, because not many of the marsh inhabitants will care — meaning the wildlife will probably let us do it.”

Beyond the Big Top