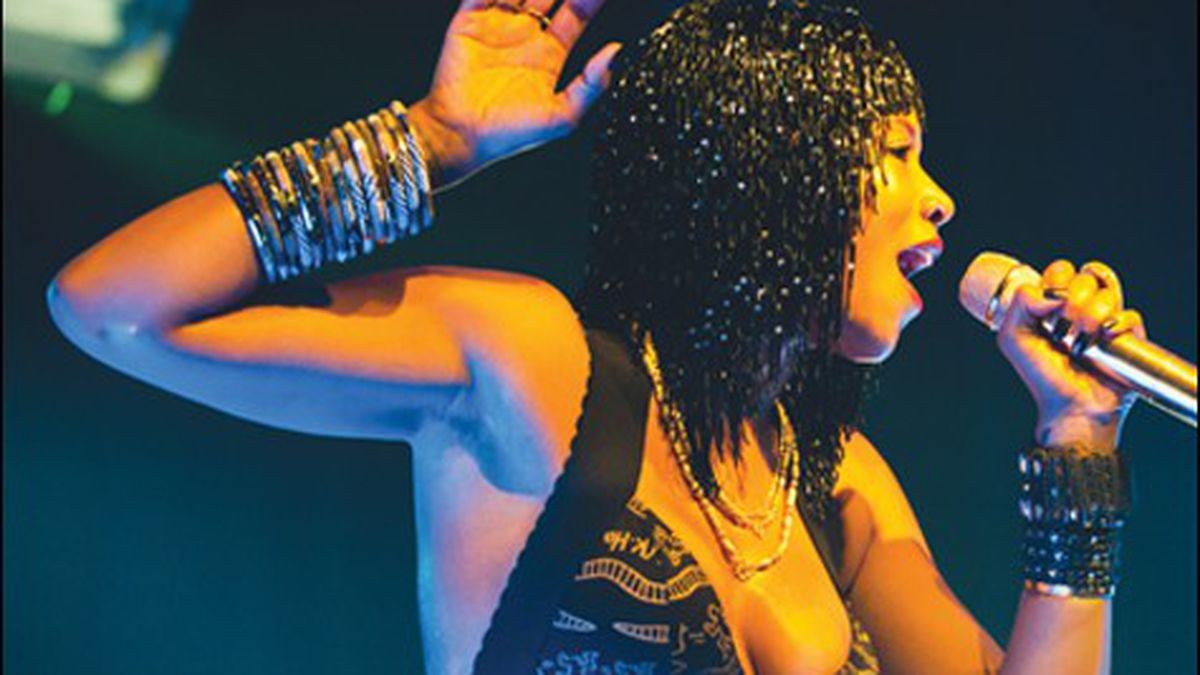 An All Hearts Disco Revival

Robyn and Kelis prove the longevity of "thump" music.

Disco, that much-maligned ’70s genre driven by four-on-the-floor bass drum patterns, never actually died. After racist (perhaps even homophobic) disc jockeys and rock critics, with their cries of “disco sucks” and record-burning bonfires, helped put it out of business in 1979, disco simply morphed into a variety of styles and gained new respectability under such monikers as “house,” “techno,” “electro pop,” “synthpop,” “dancehall,” and “club music.” “Thump music” might be a better name, as these sub-genres employ the same four-on-the-floor bass drum patterns developed by R&B studio musician “Mighty” Earl Young at Philadelphia’s Sigma Sound Studios. Now those grooves emanate from drum machines rather than living, breathing drummers, thus eliminating the need for studio set-up time and paying union scale.

“Thump” prevailed at San Francisco’s Mezzanine club last weekend, when two internationally-popular divas hit the stage and gamely proved the genre’s longevity. Robyn, thirty-one, of Sweden and Kelis, thirty, of the USA — both of whom go by their first names only — recently joined forces for a six-city All Hearts Tour, which became a sonic elaboration of eras past. Saturday’s sold-out show at Mezzanine offered four ways to deliver the thump in live performance. Far East Movement, an Asian-American foursome from LA made up of three rappers (who made their entrance in space helmets) and DJ Virman (who donned a monkey head at one point), let the turntablist handle the thump during a thirty-minute opening set that included the club favorite “Girls on the Dance Floor.” High-pitched English tenor Dan Black followed for another thirty, backed by a rock guitarist and bassist but with a machine supplying the incessant throbs on some numbers; the more syncopated grooves of “Symphony” and “Yours” offered welcome reprieves from the steady fours.

Kelis was once on the cutting edge of R&B, incorporating elements of hip-hop, rock, metal, punk, and even samba into her extremely catchy tunes. But she’s had a rocky four-year recording hiatus, during which time she divorced rapper Nas with much acrimony and was awarded $55,000 a month in support for herself and their baby boy Knight. The Harlem-bred singer-songwriter returned to record in May with both feet in the techno camp. Although her new album Flesh Tone contains some her most personal lyrics to date — two of the disc’s strongest tracks, “Acapella” and “Song for the Baby,” are about her now-ten-month-old son — their rhythms are often disturbingly stilted.

For Saturday’s date, Kelis was backed only by two turnbablists and a drummer whose primary role was to embellish, rather than provide, the thumps, which were pre-recorded. Wearing a tight printed suit cut to reveal her ample cleavage, she moved about the stage with snake-like grace. Her hips swayed left to right while her shoulders moved right to left, right hand waving above her glitter-sprinkled head. The svelte vocalist programmed her eighteen-song, fifty-minute set as a club DJ might. She alternated pitch between a raspy alto and a kittenish mezzo-soprano, while segueing from the nine Flesh Tone songs to oldies like her 2003 smash “Milkshake,” hooks from her hip-hop collaborations with Ol’ Dirty Bastard and Loon, and tunes that are better known in Europe and Australia than in the U.S. There were few breaks between numbers, the thump flowing uninterrupted from one to the next. She spoke twice to the capacity crowd of one thousand, but her words were inaudible due to the cheering din. The only special effect was a sea of red confetti that blew from above the stage into the audience during “Acapella.”

Kelis’ sexy segment was subdued in comparison to Robyn’s high-energy seventy-five-minute closing set. The blonde-haired Swede has been performing since she was twelve, and, unlike Kelis, is no newcomer to the techno game. Her simple, hypnotic English-language tunes began penetrating U.S. and UK charts in 1995, with “Dancing on My Own,” from her new Body Talk Pt. 1 CD, making the biggest dent to date.

Once you’ve gone tech, you’ll never go back, she proclaimed in perky soprano tones during the 75-minute set’s opening song, “Fembot,” from the current CD. Supporting her were two keyboardists and two actual drummers whose interplay, while maintaining steady thumps, added rhythmic variety and excitement that had been largely missing earlier in the evening. She even picked up a pair of sticks during the song “Who’s That Girl” and joined in by pounding on one of the drummer’s tom toms. Garbed less revealingly than her co-star in a black top, short red shirt, black tights, and white tennis shoes, Robyn was in constant motion. She hopped, skipped, and bounced about the stage, hips sometimes grinding, arms often flailing, while mixing material from Body Talk Pt. 1 with older favorites such as “Cobrastyle” and “Show Me Love.” Six rapidly swirling and coloring-changing spotlights further enhanced the excitement of Robyn’s music and movements. Specters of ’70s disco hovered in the wings.

Corrections for the Week of August 12

Best Place to Get Smogged: They ease the pain of a...