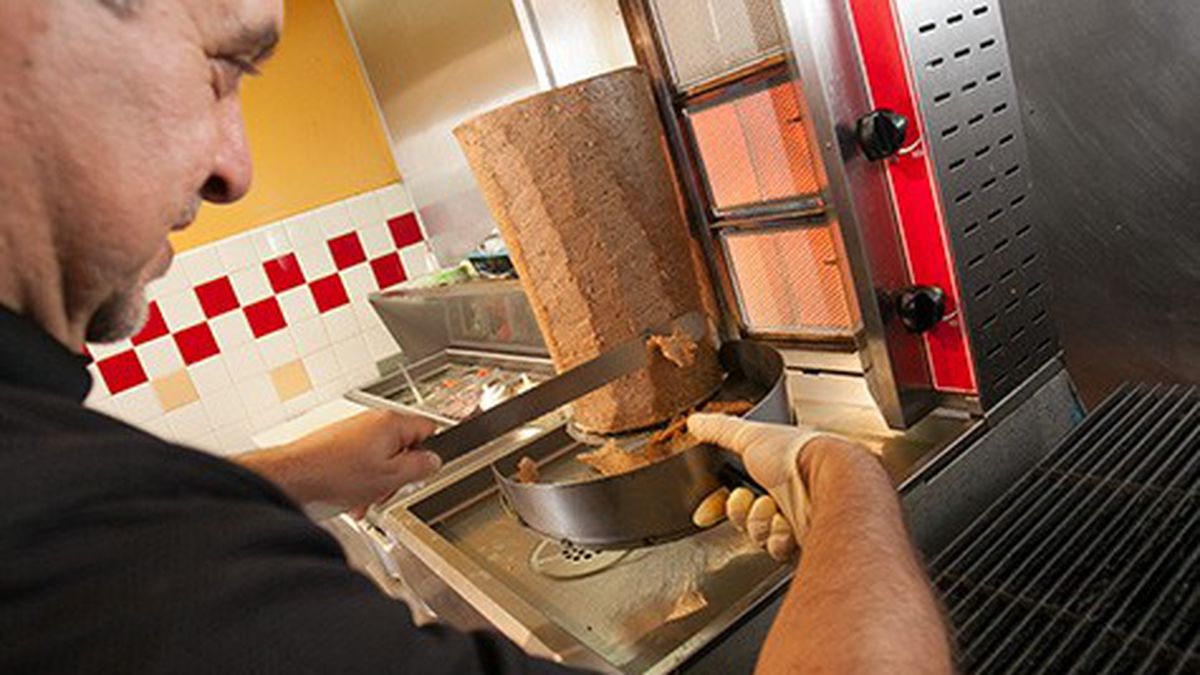 If you’re looking for the comforts of a sit-down restaurant experience, Ali Baba, a Palestinian-owned shawarma and kebab joint that opened recently deep in East Oakland, might not be what you have in mind. The restaurant is just as small as the “1/2” in its street address indicates — maybe a hundred square feet, occupying the smaller half of a building whose primary tenant is a fairly standard liquor store. You order through a plexiglass takeout window, and the only available seating is a window counter and a single round table, around which three of us sat on high stools on a recent weeknight, trying in vain to fit our bevy of styrofoam containers — each filled to overflowing with grilled meats, turmeric-tinged basmati rice, and wedges of warm pita bread — onto the limited surface area.

But if you’ve explored Oakland’s endlessly surprising food scene for long enough, then you know that this is the part of my review where I talk about how there is more than meets the eye. And that’s true in this case yet again. Ali Baba is located on a stretch of Foothill Boulevard mostly occupied by auto repair shops in a section of town that could perhaps best be described as a kind of food desert.

But I’ll be back — mostly for the shawarma, the Middle Eastern take on a spit-grilled meat preparation that’s a close cousin to the Greek gyro and the Turkish doner kebab. In America, this mostly consists of a compressed-meat mixture of minced, heavily seasoned lamb and beef that, in its final form, falls somewhere on the spectrum between a sausage patty and a lamb-y stir-fry, with a saltiness and a crisp-edged tenderness that will appeal to both the Spam lover and the connoisseur of charcuterie.

I’m told that shawarma tastes best when the meat is shaved directly off the vertical spit, though for takeout orders, which form the bulk of Ali Baba’s business, it seems the cooks mostly grill pre-cut slices on the flat-top. In any case, I had no complaints. Nine dollars buys a combo shawarma plate (mine came with the lamb and chunks of well-seared and well-seasoned chicken). The meat had been tossed with grilled onions and bell peppers, everything seasoned beautifully. The rice was perfectly cooked. And a house-made cucumber-yogurt sauce provided just enough tartness to cut into the shawarma’s salty richness. I ate it like a rice bowl, mixing in fiery chili-seed-flecked Asian-style sambal and the yogurt sauce to taste. There was also toasted pita so that you could make your own little sandwich.

The East Bay is not without its share of exemplary sit-down Middle Eastern restaurants, including downtown Oakland’s small cluster of Afghan kebab houses. But the kind of quick-and-dirty Mediterranean street meat that reigns supreme in say, Chicago’s Greektown, or that you can buy from the ubiquitous Halal chicken carts of New York City, is a relative rarity here in the Bay Area. (A half-hour wait is part and parcel of the experience, even at a casual, takeout-oriented place like Temescal’s Oasis Food Market, which, in Oakland, is Ali Baba’s only peer in the shawarma-grilling arts.)

According to Ali Jaber, the restaurant’s owner, namesake, and chef, this is Ali Baba’s biggest selling point — that the food is served quickly, even though everything is cooked fresh to order, and most of the ingredients are all prepared in-house and are of a higher quality than you might expect. The meats are all Halal-certified, and many of them soak for at least 24 hours in Jaber’s top-secret marinade before they hit the grill.

The marinade is key to Ali Baba’s other signature item, its kebabs, or grilled meat skewers — the oblong lamb meatballs known as kefta kebab, and, for the less adventurous, spice-rubbed, golden-yellow cubes of chicken breast — slightly dry, in the way that grilled chicken breast tends to be, but delicious when dunked into that bright, tangy yogurt sauce.

Even though Jaber is Palestinian, Ali Baba also dabbles in the other Mediterranean cuisines, including a no-nonsense version of a gyro sandwich that consisted almost entirely of meat, with just a dab of tzatziki and a little bit of lettuce and tomato to lighten it up. (The meat, incidentally, was the same as for the shawarma, as far as I could tell — just cut into thicker slices and served with different condiments.)

The falafel and hummus combination suffered only in comparison to the restaurant’s more meat-centric pleasures. The uniform, sesame-seed-flecked, and vaguely fancier-shaped falafels — “made here from A to Z,” according to Jaber — were just fine, even if they weren’t quite as crunchy or as light as the best versions in town. The hummus, on the other hand, was top-notch — airy in texture, just garlicky and lemony enough, and crowned with a generous drizzle of high-quality olive oil. A side order, served with a foil-wrapped bundle of toasted pita, will only cost you $2.99 — it’s hard for me to imagine a trip to Ali Baba without picking up a tub.

Like many of the ethnic eateries in deep East Oakland, Ali Baba has a handful of menu items designed to appeal to local tastes, which run more toward traditional soul food — batter-fried fish and shrimp being the most obvious concession here. (The restaurant’s previous tenant was a fish fry joint, after all.)

Yet even the most blatantly Americanized parts of the menu yielded pleasant surprises. For instance, while the fried chicken wings were served with a tub of traditional Buffalo-style dipping sauce on the side, these were a step above your typical soggy, mass-produced victims of freezer burn. Instead, Ali Baba’s cooks toss the wings in fresh herbs, spices, and panko-like bread crumbs to order, resulting in flats and drumettes with exceptional crunch, packed with enough flavor to render the hot sauce mostly irrelevant.

Meanwhile, the Slow-Food-powers-that-be and the Food Authenticity Police will surely seek to revoke my credentials after I ordered the heavily processed, decidedly un-Palestinian Philly cheesesteak. A cheesesteak at a shawarma joint? Once the cook started to make my sandwich, though, it made perfect sense. The melted cheese was standard American, and the bread was a squishy sesame roll that fell apart too easily. But the meat was neither freshly grilled steak, nor the pre-frozen Steak-umm supermarket variety, but rather slices of that same tender, heavily seasoned shawarma meat I’d previously enjoyed over basmati rice. The technique was the same — meat stacked atop a pile of sliced mushrooms, bell peppers, and onions on the flattop so that the vegetables soaked up all of the juices and rendered fat as they cooked down. Meanwhile, the cook used metal spatulas to chop away at the shawarma right on the grill, in true Philly style.

Oh sure, it was a bit of a salt bomb — salty meat combined with salty processed cheese. But I’m not ashamed to admit I polished the whole thing off.