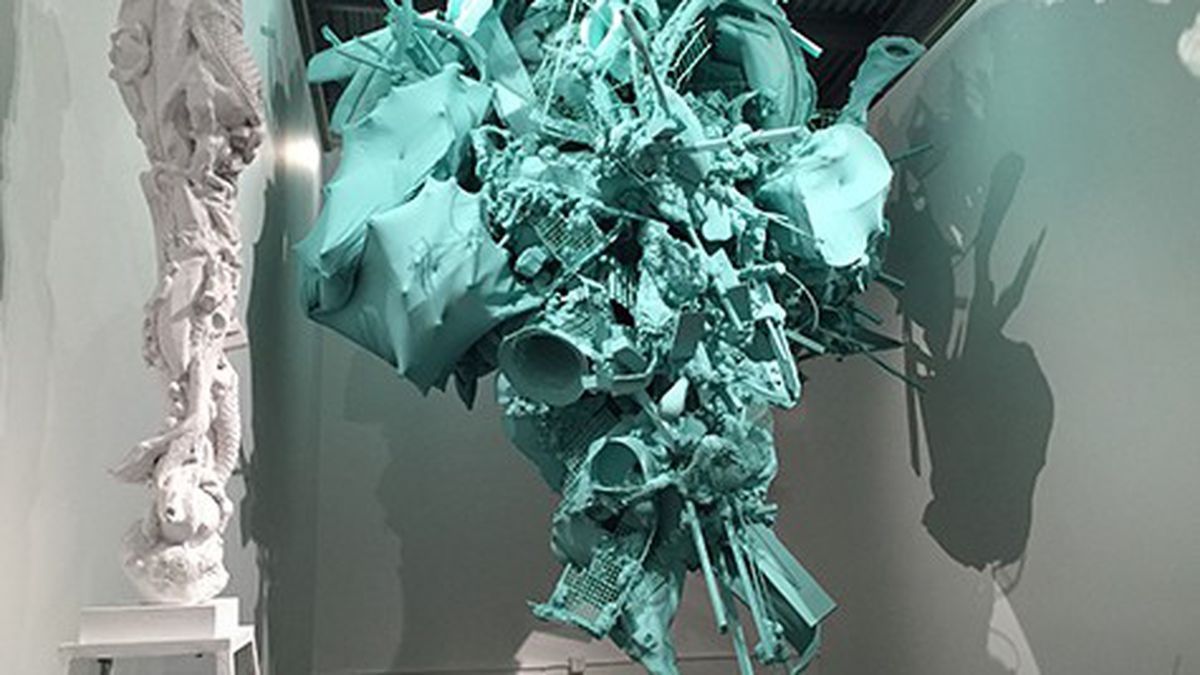 In his solo show at Aggregate Space, the Oakland sculptor offers an awesome, explosive installation.

During his Saturday morning artist talk at Aggregate Space Gallery (801 West Grand Ave., Oakland), Alex Oslance sat, slightly hunched over, and mostly mumbled about his various experiences being misunderstood as an artist. The grad-school era anecdotes didn’t do all that much to elucidate his concept-heavy sculptural practice, but his demeanor did.

Behind Oslance, a singular, suspended sculpture imposed on half of the gallery, hulking and threatening. It looked like an explosion stopped in midair, a garbled glob of industrial materials twisted together as if swallowed and spit out again. Shards of broken crates, vents, pipes, a plastic deer, chicken wire, handle bars, and mysterious protrusions obscured behind spandex tangled into one another, melded together with drywall insulation foam, a gooey-looking substance that resembles puss. Painted an even tone of light green — a color Oslance said was inspired by bronze patina and the idea of industrial decay — the complex sculpture flattened into a singular form, a cohesive visual metaphor for masculinity.

Superficially, the work could come off as the epitome of ego, grotesquely maximalist and aggressive — like an action movie in sculptural form. But Oslance’s passive appearance and theory-driven descriptions affirmed that the work is actually an intentionally hyperbolic critique of our testosterone-fueled society.

Aggregate Space curator Conrad Meyers’ brief statement about the show, Hypertrophic Distress, supports that sense of intention in describing the dissonance between Oslance’s use of heavy-duty materials and bio-morphic spandex forms: “This dynamic contrast reflects the artist’s anxiety-driven introversion, which stems from a complex reaction to the deep-seeded hyper-masculinity of American culture, something that is simultaneously seductive and repulsive for Oslance.”

Indeed, Oslance’s work balances between being alluring and disgusting. On the other end of the gallery, a magnificently delicate sculpture protrudes from a wall — by far the most stereotypically femme piece in the show. Metal mesh bent into a sensual curve is attached to the vertical surface with a large screw. A light pink, translucent substance oozes through the gaps in the mesh — hardened but still wet-looking as it shines under the gallery lights like some sort of slimy bodily fluid or shimmering mineral deposit.

Although the materials that Oslance employs are deliberately crude, the way he composes them is exquisitely elegant. Technically, the works feel refined, with a harsh sense of grace. Each appears effortless — and weightless — as to give the impression that it magically manifested in the gallery.

During the talk, Oslance spoke briefly about his workspace at American Steel Studios. When asked whether it was very busy in the massive West Oakland warehouse, he said that actually, it’s pretty quiet, pointing out that there are two sides to the complex. The industrial side (where gigantic sculptures are fabricated for Burning Man) is constantly quite busy. In contrast, the “fine art” side is more isolated, with just a few residents who mostly keep to themselves. Based on the media he uses, Oslance could easily fit into the industrial side of the warehouse. But it seems that the spectacles largely created there are one part of the culture that Oslance’s over-the-top style is meant to critique. Ironically, Oslance and his subversive work are more suited for the bookish isolation of the other side.