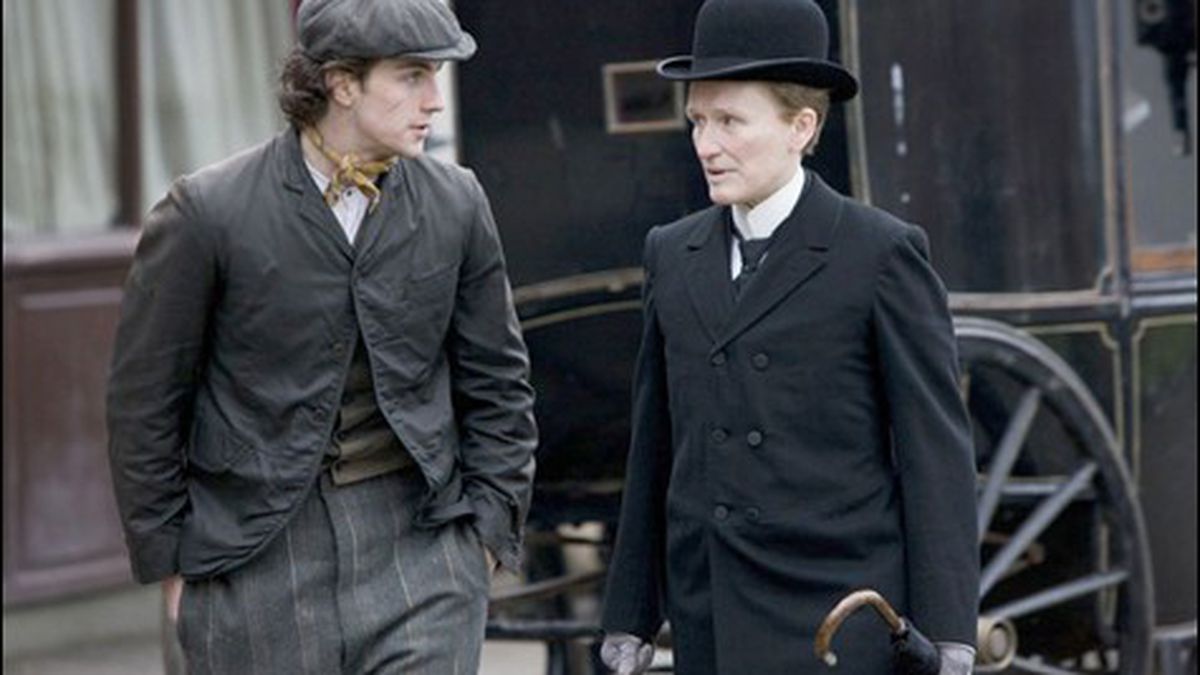 Albert Nobbs, the movie, stands to be picked on almost as much as Albert Nobbs, the character. That’s not necessarily because its potential audience is inclined to automatically shun or ridicule the story of a woman passing for a man in Victorian-era Dublin, Ireland. Anyone who hates “different” folks that much doubtless wouldn’t even consider seeing this costumed drama in the first place.

No, the thing that raises warning flags about Glenn Close’s portrayal of meek, cross-dressing hotel servant Mr. Nobbs is the suspicion that it’s the latest in a long line of homosexual outrage melodramas about intolerance through the ages — the type of flabby, by-the-numbers advocacy film that has clogged gay-lesbian film festivals for years. There’s the added notion that Close’s performance is doing double duty as a prime piece of awards fodder.

Not to worry on either account. The maudlin meter rarely gets out of the “half-a-hanky” range. Veteran actress Close and director Rodrigo Garcia put in careful and diligent work alongside a strong supporting cast, and Albert Nobbs emerges as a yarn with broad human interest and honest characterization — with the transgender hot-button issue sitting contentedly in second place.

In Morrison’s Hotel in Dublin live a number of odd sods and cuddly eccentrics. Dr. Holloran (Brendan Gleeson) is an aging rake down from Belfast who greatly enjoys his dram. Upper-class swell Viscount Yarrell (Jonathan Rhys Meyers) is constantly flitting in and out with a coterie of swingers. Amongst the downstairs staff are gossipy housemaid Helen (the ubiquitous Mia Wasikowska), newly arrived laborer/handyman Joe Macken (Aaron Jackson), landlady Mrs. Baker (Pauline Collins), and a little hiccup of a man called Albert Nobbs, the sort of person you might overlook the first time you met him. Albert is a “quare fellow” indeed, attentive to a fault, obsequious by nature, keeping to himself, and yet aching with loneliness and yearning to connect. Then suddenly, a rambling, swaggering housepainter named Hubert Page (lanky Janet McTeer) sails into view and upsets Albert’s tidy world. Hubert and Albert share the same secret, and it opens up wide vistas of regret as well as possibility for the senior citizen role-player.

This is Close’s second stab at the role. In 1982 she impersonated this same character in The Singular Life of Albert Nobbs, a New York Off-Broadway stage adaptation by playwright/director Simone Benmussa of Irish author George Moore’s original story (for which Close won an Obie award), and the character apparently stayed with her. Years later, after Fatal Attraction, Dangerous Liaisons, Reversal of Fortune, the 101 Dalmations movies, and a string of recent TV appearances, Close revisits her old friend with one of the most ingratiating star turns of the year, the complete antithesis of a blowsy, late-career actorly indulgence.

Albert literally creeps up on us, mincing his way into our sympathy. Close’s performance deserves every bit of the attention it’s getting, but let’s not forget she also had a hand in the screenplay, with writers John Banville and Gabriella Prekop. Albert touches something universal in his/her unobtrusive hope for happiness. We find ourselves pulling for him, especially when Helen and Joe begin to do what the Helens and Joes always seem to do to people like Albert.

Colombian-born director Garcia made a number of undistinguished movies and TV dramas before Albert Nobbs. It has to be said that the Irish milieu suits him, especially Albert’s understated rapprochement with Hubert, the working-man-with-a-difference ensconced in a cottage with his wife Cathleen (Bronagh Gallagher). Ordinary domestic bliss is envisioned as something so simple yet unattainable it threatens to drive Albert mad — it’s a story for our times. Somewhere along the line our disbelief drops by the wayside, we begin to connive along with Albert, and the slender premise takes hold irretrievably. Albert is obliged to masquerade as a man in order to make his/her way in life unmolested, almost as protective coloring. His/her predicament provides our entertainment, to put it in proper perspective, and Close’s craft raises the saddest of stories to the level of art.

Where Are Oakland’s Black Artists?