.Alameda Gets a Brewery, Faction Brewing

In the spring of 2011, officials with the City of Alameda distributed postcards at a craft brewing conference in San Francisco that depicted a hangar on Alameda Point’s Monarch Street emblazoned with the words, “Put Your Brewery Here!” They didn’t find any takers at the event, but shortly thereafter, they were contacted by a longtime Bay Area beer industry couple: Rodger Davis, the former head brewer at Drake’s Brewing Company in San Leandro and most recently the head brewer at Triple Rock Brewery in Berkeley, and Claudia Pamparana of 21st Amendment Brewery in San Francisco. Last Wednesday, Davis and Pamparana brewed their first batch of beer in Hangar 22, and in the process, gave Alameda its sole brewery, Faction Brewing.

According to Pamparana, the husband-and-wife team is going to be making primarily “hop-forward” beers. There will be a hoppy Pale Ale available year-round, as well as a series of rotating seasonal IPAs. Seasonal hop beers are becoming increasingly popular as experimentation in brewing grows. For example, this is the only time of year that it’s possible to make “wet-hopped” beer. Hops are typically used in pellet form, but because it’s harvest season on the West Coast, they can be freshly picked and over-nighted to breweries to make these beers. Stone Brewing Company in Escondido just began brewing a series of IPAs that are specifically not meant to last; it plastered a large “Enjoy By” date across the front of the beers’ labels. Drake’s debuted its first wet-hopped beer, a Pale Ale dubbed “Hella Fresh,” this fall. 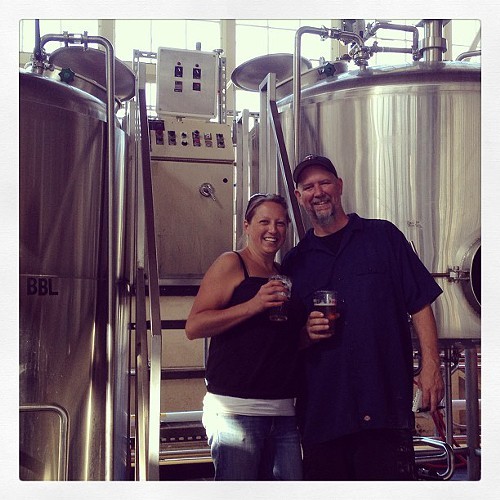 In addition to the hop-forward beers, Faction Brewing intends to release an Amber, a Red, and a Stout, as well as a Belgian series. It’ll also be barrel-aging and souring beers: Conveniently, St. George Spirits (which has bourbon barrels) and Rosenblum Cellars are neighbors.

“We’re not reinventing craft beer, and we’re not going to do anything that hasn’t been done before — we’re just going to be doing it a little differently, using our experience and knowledge,” said Pamparana. “Rodger is a hop head, but he’s not going to do what he’s done before.”

Pamparana said she and Davis hope to open some sort of a tasting room onsite by November. They won’t be bottling any of their beers for at least six months, so plan on catching them on draft at beer bars in the area, like Hog’s Apothecary and Beer Revolution. They plan to be in full production by the end of the year.

Alameda is actively trying to develop Monarch Street as a destination for booze lovers. Nanette Mocanu, the city’s Economic Development Division manager, said there are two other local breweries that have expressed “strong interest” in expanding into the hangars on Monarch Street. A distillery is currently negotiating a lease with the city.

“We’re spoiled by the location,” Pamparana gushed. “There’s room to grow and an insane view. The building has a lot of character — it’s unique.”