Since the anarchist press' warehouse was ravaged by fire, the organization's radical principles appear to be enabling recovery, rather than impeding it. 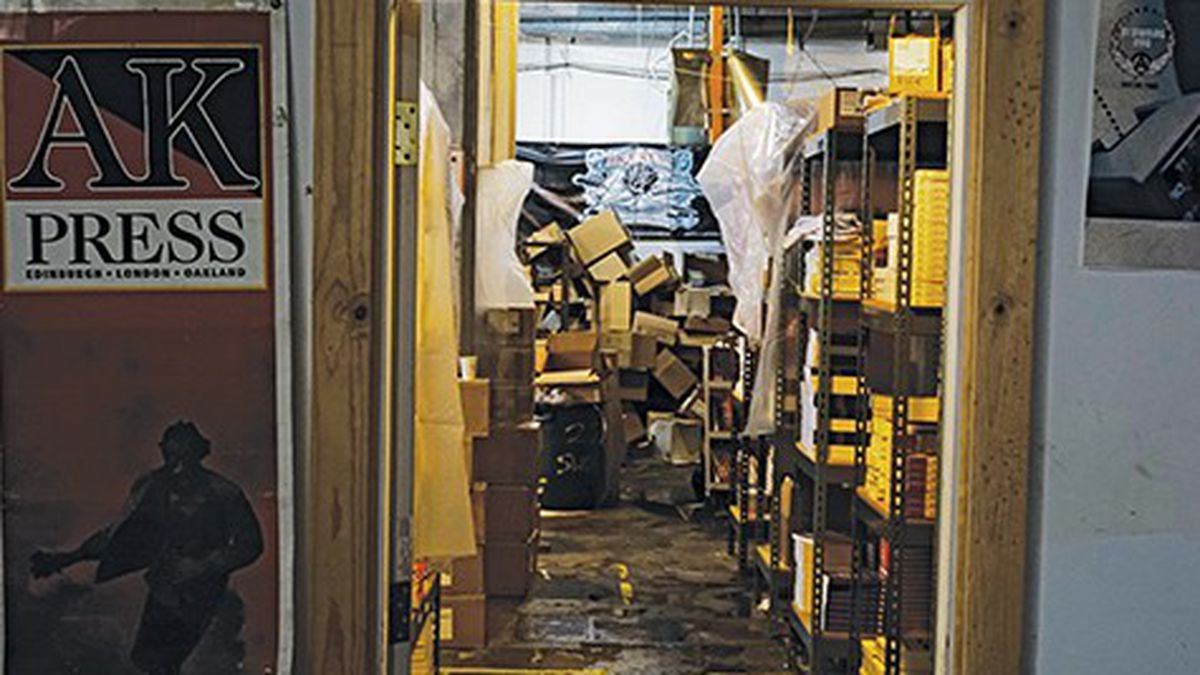 Radical politics and roaring infernos are well acquainted. Countless insurrectionary screeds invoke flames as harbingers of necessary cataclysm, while such fiery fixations are reflected in the titles of avowed anarchist publications such as The Match and, locally, Fireworks. The literature published and distributed by AK Press chronicles centuries of blazing sedition — both figuratively and for real — and advocates for more. Considering that, AK Press’ more vindictive detractors might’ve relished the news that last month the organization’s Oakland headquarters at 674 23rd Street caught fire.

“Ever since, we noticed that we’re all using fire metaphors,” confirmed collective member Charles Weigl, 52. He said that AK Press was his third anarchist job, smirking at the contradiction of terms. Weigl has written at length about how the importance of spreading propaganda overwhelms the apparent hypocrisy of critiquing and participating in capitalism.

“We’re used to adversity and we’re always operating by the skin of our teeth,” he said of AK Press. “But we don’t have a bunch of resources going to things like stupidly high-paid CEOs.”

While fire damage is a huge impediment, being embattled is a hallmark of AK Press’ quarter-century tenure. Having regularly thwarted internal, federal, and ideological threats, dealing with the impacts of a fire doesn’t seem much more problematic than usual. And anyway, the organizations’ radical principles — simply, to propagate anarchist and anti-capitalist thought by any means necessary without compromising its own non-hierarchical organization — appear to be enabling recovery, rather than impeding it.

Seven collective members of AK Press, which has published upwards of 350 titles, receive the same modest salary for working at least forty hours a week. The 23rd Street headquarters, a 5,800-square-foot mixed-use building, which AK Press shares with 1984 Printing, contains an inventory of more than 100,000 books. The structure is red-tagged, meaning that many costly improvements are required before its legally habitable. The extent of the damage – from fire, water, and smoke — isn’t entirely clear, but Weigl said the practice of mutual aid is compensating nicely.

Boots Riley spoke at a recent benefit. Situationist scholar Ken Knabb organized another. Several concerts have been announced, including two gigs at 924 Gilman Street in Berkeley to benefit both AK and residents of the structure — where the fire started and two people died — adjacent to AK’s building. An especially zingy secret headliner is slated for May 17. A cabal of publishers sponsored an upcoming benefit in Brooklyn, New York. In the spirit of camaraderie, proceeds from AK Press’ 25-year anniversary event this Sunday at The Omni — another intrepid anti-capitalist venture in need of money — will benefit the Bay Area Anti-Repression Committee, which stewards a bail fund for arrested protesters. To the artists and resistance-minded institutions in AK Press’ orbit, making money is sort of lame, but raising it for peers in need is revered.

AK Press was formalized as a collective in 1990 by a group of activists in Scotland. It arrived in the Bay Area in 1994, and operated largely as a book and zine distributor, housed in Bound Together Books on Haight Street in San Francisco, and then in the apartment of The Dicks’ vocalist Gary Floyd, also in the city. By 1996, AK Press had settled on a space in the Mission district. Big clients, such as Tower Records, placed orders. It had a leg-up back then, too, notably from punk record labels. Epitaph Records released a benefit compilation CD, Better Read Than Dead, and AK Press honed a relationship with Jello Biafra’s Alternative Tentacles label to produce spoken-word CDs featuring thinkers such as Noam Chomsky, who graciously forewent his royalties.

The 1999 World Trade Organization summit in Seattle was a pivotal event for AK Press. Mounting discontent with the forces of globalization and neo-liberalism brought numerous protesters, and media coverage brought now-familiar black bloc tactics into the broader public eye for the first time. It was a boon for AK Press’ propaganda and products; the next year, the headquarters moved to Oakland, and shortly thereafter revived canonical works by anarchists such as Emma Goldman, Alexander Berkman, and Peter Kropotkin, in addition to publishing material focused on the prison-industrial complex.

Between 2006 and 2007, AK Press received another kind of attention. According to visiting agents from the FBI and US Secret Service, videotapes containing alleged terrorist threats were mailed to AK Press and also to other publications around the country — with AK Press’ return address on them. “We did what any sane person would do and refused to talk to them,” Weigl said, referring to the feds. Agents visited collective members at their homes, explicitly requested a customer list, and threatened to hold a grand jury proceeding. “They try to look for weak links, someone like me, who has a family,” Weigl said. “But a grand jury can’t survive if everyone’s united in their refusal to cooperate.”

Other obstacles arose, such as the departure of founding member Ramsey Kanaan and, well, the recession. Also, the book industry fell apart. But the unified front that steeled AK Press against a potentially catastrophic federal investigation spoke to the organization’s overall resilience. Other types of negative attention were great for business. For example, Weigl said, “It’s a good thing when Glenn Beck waves around our book denouncing it,” referring to We Are an Image from the Future, a 2010 study of the growing anarchist contingent in Greece.

Weigl also emphasized AK Press’ inter-disciplinary conviction, its willingness to flaunt the usual divisions between punk, activism, and academia, even deliberately creating synergy between all three. It’s a sort of rebellious promiscuity that’s reflected in how folks arrive at the collective.

Jose Palafox, a nine-year resident in the organization’s building and former collective member, recalled picking up pamphlets from AK Press vendors at punk shows in the 1990s, such as an early version of Craig O’Hara’s The Philosophy of Punk. More recently, he has worked as a college professor at San Francisco State, where he observed that anarchist studies had become an emerging field due in part to AK Press’ contributions. Moreover, the publisher worked to push back against what Palafox considers a trend toward academic repression, exemplified by when AK Press author and former University of Colorado professor Ward Churchill lost his job over controversial writings about 9/11.

“The war on terror wasn’t just a war waged for empire but a war waged on ideas,” Palafox said. “[AK Press] publishes titles that need to be published, regardless of whether they make money or not.”

It’s tempting to take flippant disregard for profit as an indicator of dysfunction — a common assumption that AK Press defies. Consider the warehouse’s renovations so far: “When people from the city saw that we’d boarded up units, turned off the gas and electric, and started cleaning, they were shocked,” Palafox said. “Because we’re radical tenants, they thought we’d do the opposite. They had an expectation of how anarchists behave and we flipped that.”