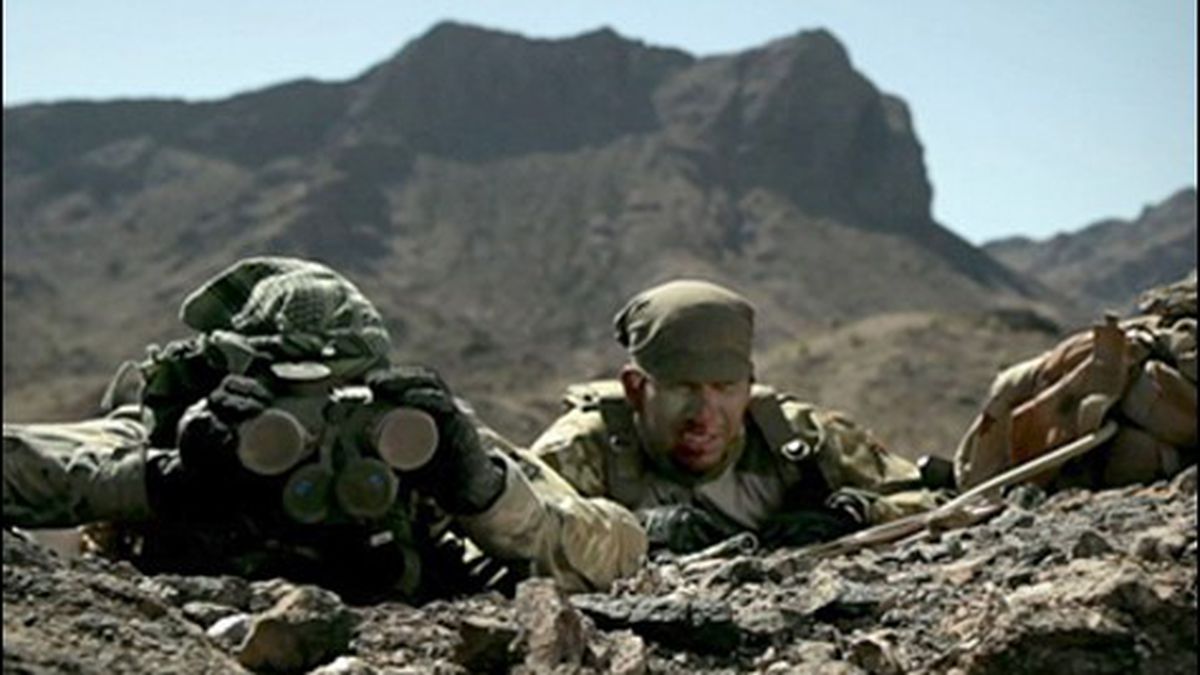 If we keep the discussion on the most basic level, Act of Valor can be seen as an exciting spectacle of men in war. A team of active-duty Navy SEALs — or so the publicity promises — essentially play themselves in re-enacting a series of missions against a group of terrorists hell-bent on penetrating the USA. The firefights are intense and exciting; the warriors are imposing, superbly trained and conditioned techno-jocks; and the message comes across clearly: Enemies of America, beware, for we will find you and kill you.

But it’s difficult to talk about Act of Valor on its own terms, even though in structure and tone it’s almost exactly the same as such old-time war movies as Sands of Iwo Jima or Battle Cry. Twenty-first-century politics always creep in. No matter how fascinated audiences may be with the trappings of the “operators” who killed Osama bin Laden, they’re also aware that modern global conflict involves things that were previously considered “un-American” — redaction, torture, assassination, civilian collateral damage, etc. — and that it’s political people who make the major decisions, not the troops who take care of the wet work.

The makers of the movie have their work cut out for them. Mike “Mouse” McCoy and Scott Waugh, co-directors of Act of Valor, have produced films for the Naval Special Warfare command — in addition to auto- and motorcycle-racing pics and the upcoming Arnold Schwarzenegger comeback, Black Sands — and screenwriter Kurt Johnstad is at least partially responsible for 300, the hilariously beefcake ancient-Greek battle epic. So the SEALs legend is theoretically in sympathetic hands.

These days, a piece of pro-military big-budget entertainment necessarily encounters a clash of belief systems. Military supporters cite patriotism, esprit de corps, shared sacrifice, and the elusive concept of freedom in defense of their beliefs, and the movie’s SEALs — professional killers who nevertheless revere family values and subscribe to the thoughts of Native American war chief Tecumseh — embody that ethos with a vengeance. But there’s another way to look at their glorified skirmishes.

The band of “Jihadi terrorists” in the movie is a detachment of Moro Islamist rebels from the Southern Philippines. They’re responsible, under the leadership of the shadowy mastermind Christo (Ukrainian actor Alex Veadov), for the massacre of a school full of kids in Manila in the first reel, and after bloody layovers in Somalia and Mexico, their ultimate target is the American heartland. Christo, a murkily motivated Russian Jewish character who resembles a combination of bin Laden and Grigori Rasputin, is a smuggler by trade. He’s now helping out his boyhood friend Yuri, aka Shabal (TV actor Jason Cottle), a wild-eyed Yankee hater with a froth problem. The bad guys have improvised an explosive device containing ceramic ball bearings that they want to use on the decadent hedonists of Las Vegas. Their plan is to tunnel into the States from Mexicali, Mexico, using drug cartel goons as security. This may sound ridiculous to us, but the SEALs are not amused. A squabble arises.

If the bad guys are overdrawn and cartoonish, the good guys are pretty much unknowable except as emblems. Presumably for security reasons, characters like Lt. Rorke and Chief Dave go unidentified in the credits. It’s a mistake in movie terms, this semi-covert glorifying of heroes who cannot reveal their identities. The appeal of America’s previous generations of screen warriors — John Wayne, Clint Eastwood, even the conflicted anti-heroes of The Deer Hunter — lay in their personalities. In Act of Valor, the SEALs’ personalities, outside of the brief “family outing” intro sequence, are cloaked in the anonymity of the brotherhood. There’s nothing for us to get a handle on except the gunplay, and even that wears thin in a feature-length film. Secret heroes are doomed to remain a secret.