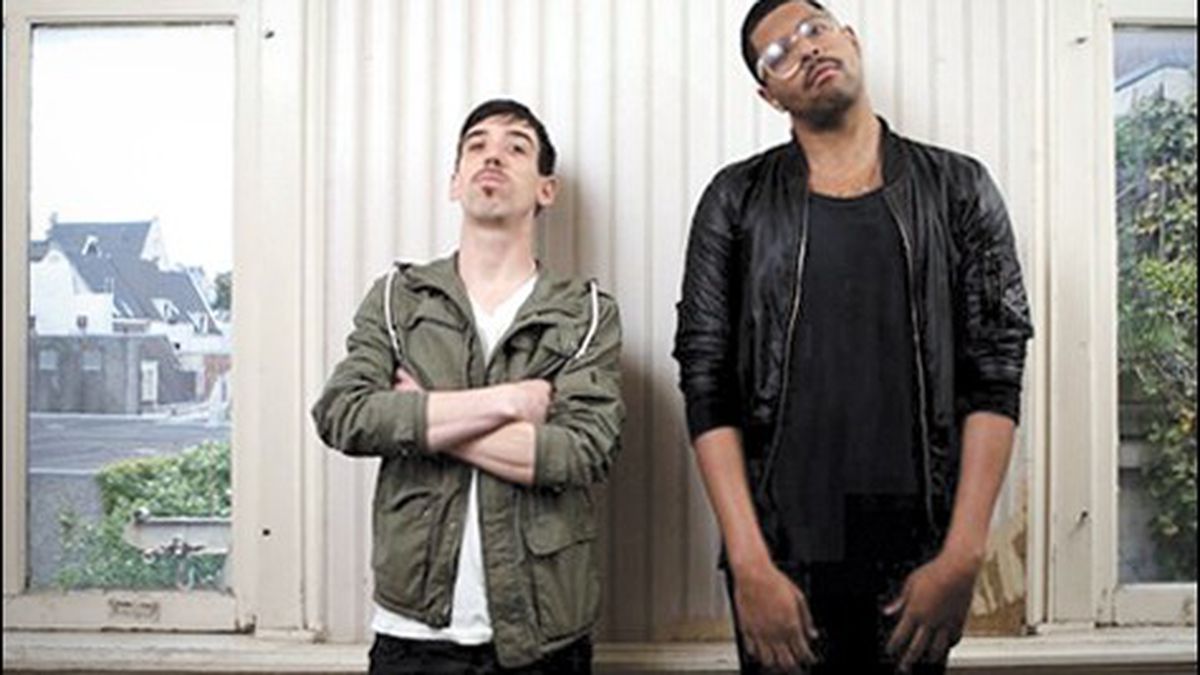 This fall, the Internet buzzed with news of a handheld laser so strong, it lights clothes on fire and causes flash-blindness. Lucasfilm Ltd., the company behind Star Wars, promptly issued a legal warning to the laser’s Hong Kong manufacturer, Wicked Lasers. The infernal thing looks exactly like a lightsaber, Lucasfilm Ltd. noted, the most popular — and trademarked — weapon in all of science fiction.

Yes, the days of the consumer lightsaber are upon us. But if the handheld ability to blind intruders with phased quanta is not your bag, may we recommend Lazer Sword as a relatively safe nighttime alternative.

The album reflects Bryant and Antaeus’ in-demand live show, honed over the last five years of living in San Francisco, and touring the United States and well as Europe four times. The duo currently resides in Los Angeles and Berlin, but returns to San Francisco for show dates.

On stage at the Rickshaw Stop this September, Lazer Sword focused on, well, pumping up the volume. They’re essentially populists, in a “sound and fury” sense of the word. At their best, Roy and Rutledge combine glass-shattering, neighbor-infuriating bass and infectious samples.

“Most of it is pretty much hype stuff,” Antaeus said. “When we play we like to get the crowd dancing,”

Tall, dark, and handsome, the San Francisco native sports a sweater that makes him a dead ringer for Carlton in Family Matters. Underneath is a faded, Eighties print, button-down short-sleeve straight from Saved By the Bell. Add in his high fade and his new single, appropriately named “Gucci Sweatshirt.” You realize Antaeus is practicing some Thetan Level 7 irony. Yet he pushes more wattage than the city of Albany. At Rickshaw Antaeus hollered at the crowd, then traded live chopping and editing duties with Bryant, who is shorter, whiter, and mostly dressed for the Upper Playground underneath a black cap.

The duo mixes and matches up to forty samples per song using Ableton running on two Macs. They reference dubstep-y reggae and garage, and use vocal effects both human and dolphin in the mix. The indie rock crowd digs it. Lazer Sword took five years to come out because Lazer Sword was focusing on the live show, Bryant says.

“We knew we were going to do a record for some time. But we’re two different people and we bring a lot of different styles independently, and it’s a matter of chiseling,” Bryant said. “It’s a two-headed snake of an album.”

The two prefer to produce in computer program Ableton, mainly for its ability to swap tracks via a server. Even when they lived together they worked apart. “It’s hard to sit there with one computer chopping up vocal noise for half an hour,” says Bryant. “It’s very micro-edit heavy. It doesn’t really make for a good-time hang-out session.”

Outside Ableton, Lazer Sword relies on a Roland JUNO synth, a MircoKorg, and a Talk Box — a voice effects device that resembles a vocoder. The synth is all over Lazer Sword, from the fierce electro of “Def Work” to the psychotic Game Boy glitch of “Skybox.” The talk box owns track “FUBU,” which checks Dr. Octagon and Castlevania so hard, Kool Keith probably felt it 3,000 miles away.

Even Darth Vader voiceover actor James Earl Jones does a stint on the hook in “Surf News,” chanting: Cool it. Your momma’s going on a date. Can you dig that?

It’s a hyper-nerdy reference to The Vader Sessions, a Star Wars parody video with over four million views on YouTube; you know, the kind of stuff two young guys bond over, while living and working in San Francisco.

For his day job, Bryant used to secure licensing for XLR8R magazine’s music compilations. “I tried to do anything but write about music there,” he says. “But I actually really enjoy working with labels and bands, that whole side of things.” Antaeus worked at Amoeba Records for a while, returning as a guest performer in mid-September this year.

“I worked there for a good eight months. Wow. Like, three years later I’m playing music here and I got Turf Talk on my album,” Antaeus says. “It’s going to be interesting, because not everybody in Amoeba is coming in for Lazer Sword.”

On the cover, two massive, Never-Ending Story-style robot statues tower over our fearless protagonists, who are clearly on a neon journey.

“He sent us back the first sketches and we said, ‘Don’t worry about the deadline. This is awesome. Just keep going,'” Bryant said.

“We’re stoked on doing a full LP, because it’s like a story, rather than a small article. It’s very well-rounded,” Antaeus said.

Bryant added, “I’ve felt like we’ve changed a lot over the years. We just kept finding more reasons to keep switching things up and finally finding our sound. And it shows on the album — ’cause it’s all over the place.”

Now the two will be all over the globe, with Antaeus living in Berlin, and Bryant in LA, then touring Europe and the US this winter.

Stay tuned, the two say. Or don’t. It depends.

“If we put out another album in a year or two, it won’t be anything like this,” says Bryant. “We enjoy updating and iterating.”