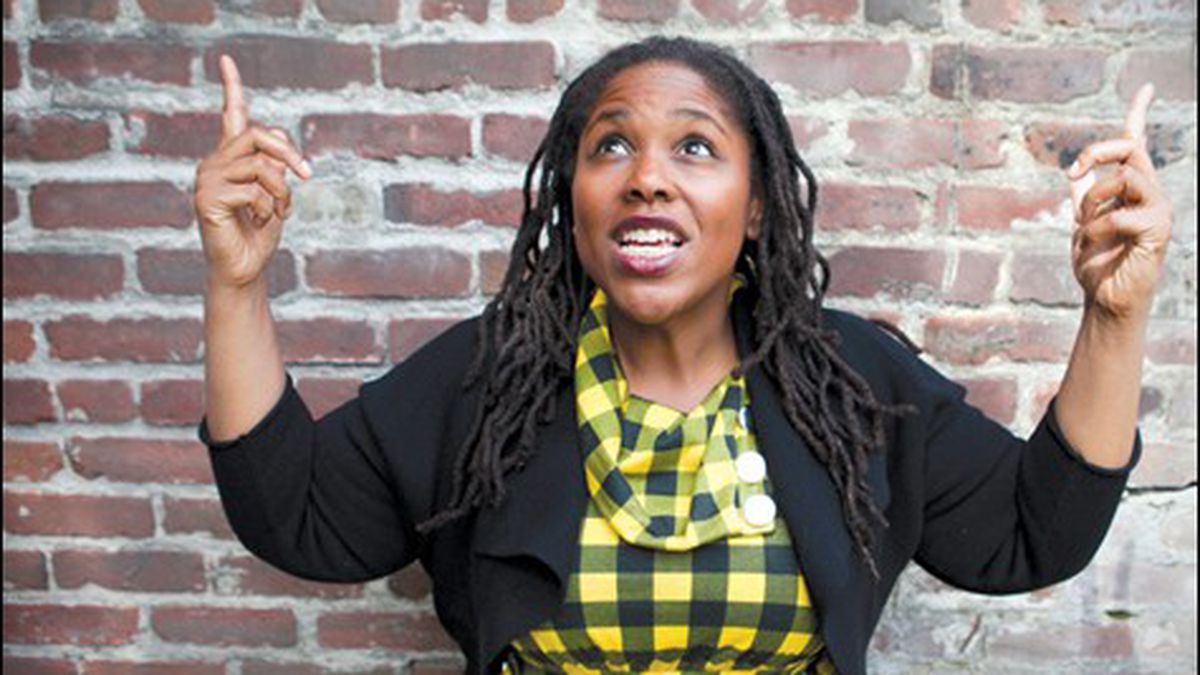 Rashida Clendening launched her career in jungle, but found her voice in soul.

Only in the last five years did Rashida Clendening (aka Audio Angel) become one of the go-to singers for local groups like Spaceheater (recently rechristened the Evan Francis Group) and the Jazz Mafia. Before that, she was knee-deep in the jungle and drum ‘n’ bass scenes, and before that, she was the type of spiritual seeker who would pay for Tony Robbins workshops, and travel across the country to woo a guy she’d met online. (It didn’t work, but more on that later.) And before that, she worked at a newspaper in Florida. It was an odd path for a woman who would eventually find her voice in soul.

At 37 years old, Clendening looks about ten years younger. She has big saucer eyes, wears her hair in dreadlocks, and doesn’t avoid bright, garish colors — like the hot-pink earmuffs hanging on the wall in her living room. That’s a useful asset for a woman whose career is finally starting to take off. She’s the new artist at large for High Sierra Music Festival, which means she’s booked to play all four days this year with any band who wants a vocalist-for-hire. Not to mention she’ll share a stage with Jamaican guitarist Ernest Ranglin, who is considered a “godfather” of ska and dub. And she’s gotten more name currency in the local scene, playing with Spaceheater, ska band Franco Nero, The Ray Band (a popular tribute to Ray Charles, led by Mike Irwin Johnson), Funk Revival Orchestra’s Tribute to Roy Ayers, drum ‘n’ bass group Beatropolis, ambient electronic group General Fuzz, an electro chamber outfit called Sound Became Color, and her own venture, Ex-Pyramids, which is a duo with drummer Mike Reed. Ex-Pyramids just launched a Kickstarter campaign to bankroll their next album, and Ray Band has a live CD slated for release in May.

Clendening says that pliancy is a large part of her appeal — she can faithfully adopt just about any vocal style without having to approach it from a scholarly angle. But Irwin Johnson argues that she’s just an incredibly soulful person by nature. “She can’t read music so she just learns the parts [for Ray Band] by ear,” he explained. So far, that hasn’t been a problem. Clendening can work off the logic that if a note moves up on the staff, you move your voice up a bit. And she knows how to handle the music instinctively. Johnson thinks it’s a natural fit: “Everyone I talked to said she was the one,” he continued, explaining why he hired Clendening in the first place. “She’s the go-to for blaring soul-singer stuff.”

It’s a bold characterization, and probably one that Clendening wouldn’t make herself. She grew up straitlaced and Christian in St. Petersburg, Florida, and learned to sing in her Methodist church choir. It wasn’t a real stereotypical, get-downy church choir, Clendening was quick to demur. “The stuff we’re singing was Christian pop songs,” she explained, launching into a mock coloratura rendition of “Rock of Ages” (the hymn, not the Def Leppard song): Rock of ages/Bled for thee, da da da da …. Clendening trailed off, laughing.

Still, she loved music instinctively, and consumed it voraciously — everything from gospel to Nirvana, punk rock, reggae, and synth-pop groups like The Art of Noise. Her grandmother sang and her father collected jazz records, so it was pretty easy for Clendening to become an omnivorous absorber of genre. Clendening started clubbing at age sixteen but remained a Goody Two-shoes (in relative terms), studied journalism at Florida A&M University, and snagged a graphic design job at the The Lakeland Ledger newspaper. She came out to San Francisco for the first time in 1996 to visit a guy she’d met in an AOL chatroom, and fell in love with the city but not the guy. After returning in 1997 for a Tony Robbins spiritual retreat, Clendening decided to move for good. She also decided to switch career paths and become a voiceover actress, which eventually led to acting work. And she started attending house music parties like Phunckateck and Eklektic.

The house scene was, in fact, where Clendening got her major star turn. She was “discovered,” while dancing, by two female DJs named HoneyB and Madame Butterfly. They liked Clendening’s moves so much that they recruited her to be an emcee — meaning someone who stood behind the DJ booth and sang over tracks. She chose the stage handle “Emcee Angel,” and later changed it to “Audio Angel” to fend off drunk guys who would hear the word “emcee” and badger her to spit a verse.

Granted, it was an improbable career path. And not one that lent itself to real stature as a soul singer, which might explain why it took Audio Angel such a long time to get on. Clendening says that when she first started hosting parties, she would generally stand behind the DJ in order to be out of the way. Maybe it was in her nature to be standoffish and demure. Or maybe she naturally felt like an interloper. Other than British vocalist Diane Charlemagne, she didn’t know of that many African-American women who’d made their names in dance music. “Back to the gender and race stuff — there was this sense of, ‘Is it okay for me to be out here? Is it okay for everyone to be looking at me? I’ll just stay back here,'” she said. “Now I understand it is about showing up, and bringing as much as I can.”

In her natural state, Clendening is a big belter. She’s a descendent of Charlemagne, yes, but also of Odetta, Mahalia Jackson, and Linda Tillery. She has the kind of voice that could hold its own, even over a beat clotted with studio effects, or an orchestra of guitars, all stabbing and jabbing at the same high-treble frequency. Her track with the local electronic producer Jaswho? falls in that vein — it has Clendening singing giddy contralto hooks over a busy patchwork of synth and snare. On one of her recordings with Sound Became Color, she plays clarinet and sings in a grainy Billie Holiday voice that sounds completely unlike her normal timbre. “People hear it and they’re like, ‘Oh, is that you?'” she said, smiling as she cued up the track on her computer. She sang along, just to prove it wasn’t a ruse: Every time you walk away/Where sunlight bends to gray/You know they know. “It’s just a style,” she insisted. I could sing more like — she took a deep breath — You knoooooooooow/They knooooooooow. She sang the last two lines in over-amplified, melodramatic, American Idol-style melisma. “But it doesn’t fit it.”

Clendening is fond of saying that she looks for “authenticity” in music. She studied for the Ray Band by watching old Ray Charles videos on YouTube and internalizing the sound, rather than studying it the way a vocal pupil might. Johnson, who is more of a conservatory-trained musician, remains fascinated by this approach. He says it makes her a more dynamic singer. Clendening says it’s just intuition. “I just think, how would it sound if my voice was in there, somewhere,” she explained, trying to elucidate her creative process. “There’s no other way to do it.”