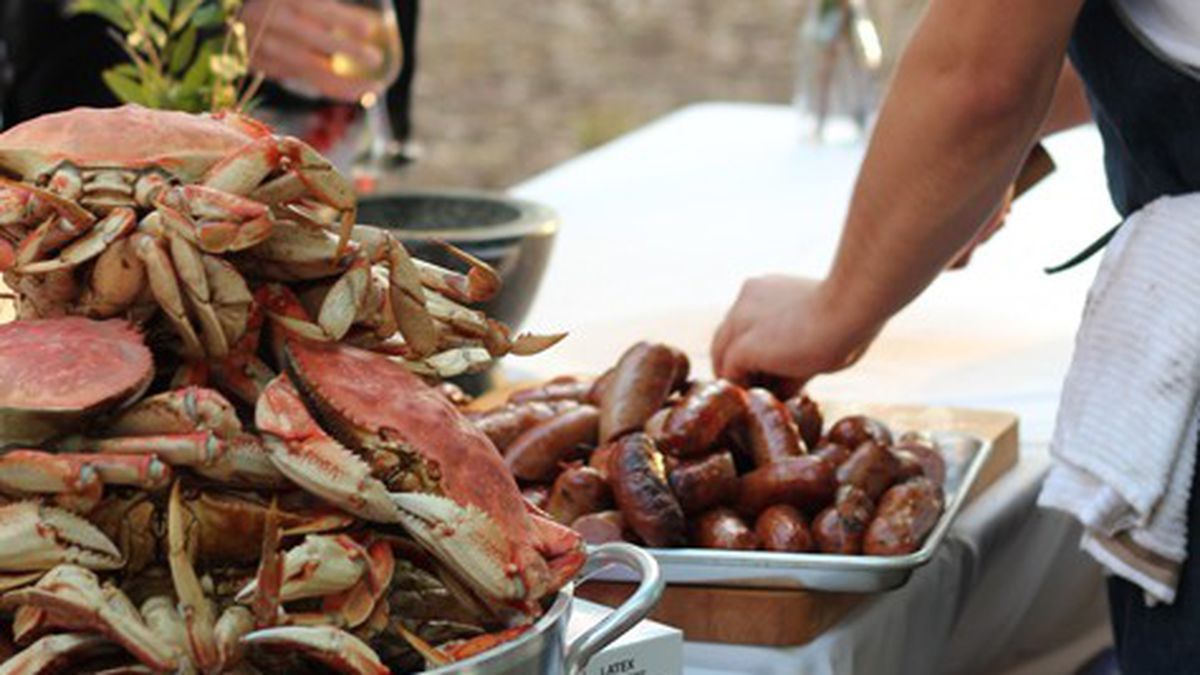 As far as supper clubs go, Canoe Club is a particularly rogue one. Oakland’s newest dining venture takes a renegade approach to eating — which, as it turns out, means getting a little messy and loosening up personal boundaries.

Propriety, for the most part, is beside the point. Rather more important is the food, and a mission to foster human connection. To be clear, that means no cellphones, no finicky eaters, and a relentless embrace of the unknown. This past weekend at the club’s first dinner, which was held in a eucalyptus grove at Tilden Park, mallets fell on crabs, sausage grease dripped from the table, beers were consumed, bites of uni were shared, and wine was spilled. Over it all, the gloaming softly, slowly, set in.

Canoe Club is a supper club only insofar as it’s a ticketed meal (entry cost $125). Beyond that, the project takes a wildly rugged departure from the norm. The idea, and its renegade flavor, was born between two friends during a sunbaked, booze-washed weekend on the Russian River with the aim of bottling up and delivering the very feeling of those few days. It helps, too, that the pair — Aleco Chigounis, resident coffee doyen, and David Tai Bornoff, an advertising guru with an impressive knowledge of beer — are veterans in the business of food and branding. Not long after the idea arose, Bornoff commissioned his next-door neighbor — State Bird Provisions sous-chef Stephen Thornton — to helm the food side.

With extensive experience in outdoor farm-to-table cooking ventures, Thornton had no problem in Tilden Park. Using only a five-foot grill with mesquite and a propane kettle burner, the chef wrangled a duet of salmon tartare and oyster canapés — and five other courses — to be distributed to a long table of thirty. In between, he found time to extend sturdy handshakes and an utterly disarming sense of genuine gratitude. One would have never guessed that he had prepared everything in his house, that cleaning and brining the anchovies took five hours and was done in the dead of night, or that his crab connection bailed two days out, forcing him (with his father’s help) to BART to Pier 45 with two iced coolers.

Thornton has a masterful hand with seafood. From a fried egg dressed in cracked almonds and tender brined boquerones (fresh anchovies) to the charred tendrils of salty baby octopus under a blanket of cumin crema and blistered Padrón peppers, the textural interplay was romantic, satisfying, and Spanish in feel. The octopus was, in fact, Valencian, and was pummeled in cement mixers with rock salt. For having endured a brutal beating, it was a subtle thing.

Talk to Bornoff about the concept, and he’ll talk to you about memory. With a background in branding, he’s a seasoned curator of experiences that stick. In this case, building community stays paramount. Canoe Club is, in a way, a tasty form of activism against the ever-isolating effect of smartphones and technology. It’s an answer to a big question.

“How do you enhance real connection? Well, you put food on the table. You remind people of something fundamentally animal about us: the need to be together. We’re like tribes,” said Bornoff.

Toward the same point, Thornton chose to make the food family-style, maximizing the diners’ interaction. The night peaked when guests were removed from the table to mingle and drink while staff stripped the linens, laid down some butcher paper, and spilled a course of crabs and sausage down the table’s center. No forks, no plates — just plastic bibs and branded mallets.

Happily lubricated and decidedly not full anymore as soon as the crab showed up, the diners partook in orderly chaos. At this point I learned about the apparently long-held desire I’ve had to smash an expensive dinner to pieces with a hammer. Gladly, that’s cool here. So is manhandling your neighbor’s food, stealing bits of it, and spilling all your drinks.

Canoe Club is only a concept: a mission to bring people together around food, to recreate the casual freedom of weekends in unusual locales with good company. There’s a gritty appeal in the way it strips down the pomp of supper-clubbing, and an unusual joy in watching a dinnermate drop and eat a spot prawn off the ground when doing the same off a restaurant floor would be unthinkable. (The future of Canoe Club is wide open, but it will be a monthly affair, and developments can be tracked at the CanoeClubOakland.com; the next iteration might be held inside an Oakland warehouse.)

If it’s any evidence that this is working, I’ve got the memory. I have a few new phone numbers and a date to visit a winery owned by the woman who ripped out the meat of my crab. These don’t feel like dates I would have made at a cocktail party. There’s just something about getting sprayed with shellfish juice that melts your pretense and somehow breaks that ever-lingering urge to check your phone. Maybe this is as close as we can get to freedom for now. And really, I can live with that.