A tiny takeout joint in downtown Oakland surprises with homey flavors from South Asia and the Caribbean. 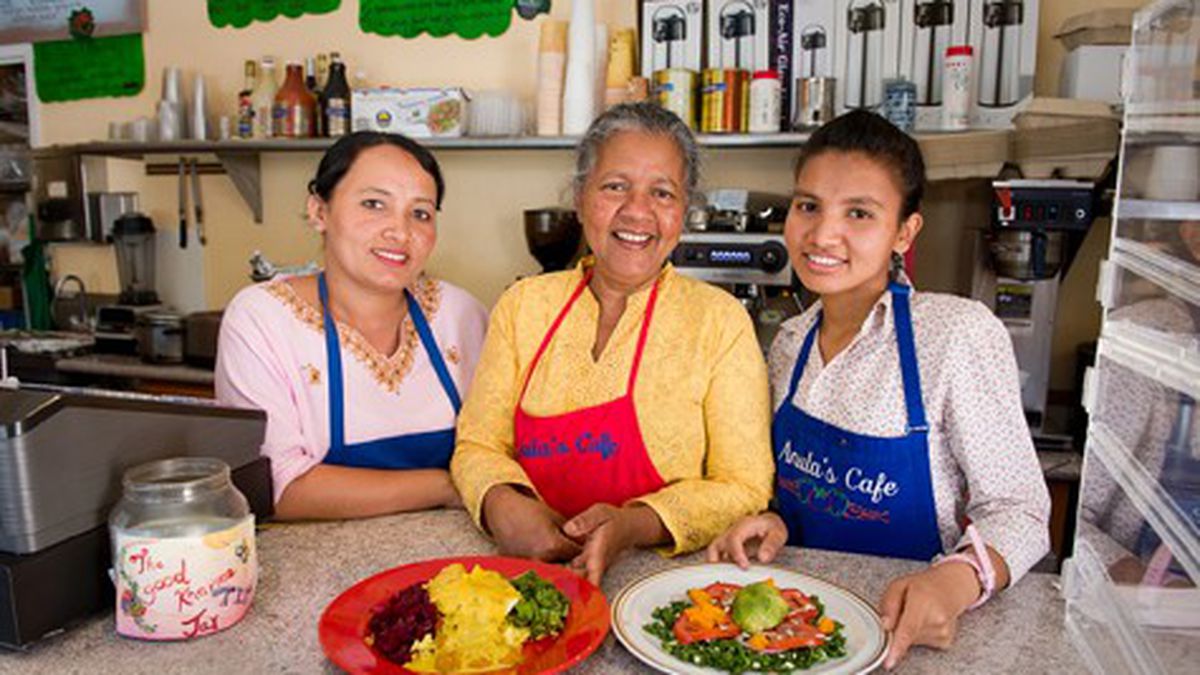 This one’s for the shopkeepers, the schoolteachers, the cops, the cab drivers, and the low-level corporate warriors — all the downtown working stiffs who don’t have the luxury of a two-hour, expense-account-subsidized lunch. Downtown Oakland has become a panacea of epicurean delights — of noodle joints and banh mi shops and upscale taquerias — but many of us who face down half-hour lunch breaks daily are familiar with an even humbler institution: the Generic Deli. Often immigrant-owned — run by hardworking Korean or Latino or Middle Eastern folk — these nondescript holes in the wall are places to grab a quick turkey sandwich or prepackaged salad. The food is filling and inexpensive and perhaps of a slightly higher quality than what you’d find at Subway; that’s usually the nicest thing you can say. You aren’t going for ambience or food with character.

Once in a while, though, one of these places takes you by surprise. Such is the case with Anula’s Cafe, a takeout deli at the intersection of Franklin and 13th streets, right in the heart of downtown Oakland. It is, on the face of things, just another Generic Deli, a tiny slip of a shop with handwritten menu boards. There’s a typical-sounding selection of salads and panini and cold deli sandwiches, and a small window counter to accommodate a handful of customers.

But there is more than meets the eye at Anula’s. Anula Edirisinche, the eponymous chef-owner, told me she ran a flower shop for many years before deciding to open her little lunch spot in 2009. She’s one of Lord-knows-how-many talented home cooks who are always being encouraged by friends to open up a place — except she actually went ahead and did it.

Edirisinche is Sri Lankan; her husband is Jamaican. And many of the best and most interesting food items at Anula’s come off the daily hot specials menu, which is an amalgam of those two cultural influences — one meat option and one vegetarian option, both priced at $7, available starting at around 11:30 a.m. Monday through Friday.

You quickly figure out that you’re not at some run-of-the-mill deli if you go on a Tuesday, when Edirisinche serves her best dish, a version of jerk chicken based on a recipe she learned from her Jamaican mother-in-law. Two generous skin-on drumsticks — slow-cooked until the meat was so tender it barely hung onto the bone — were coated with a dark spice paste that had the slight bitterness of sundry medicinal herbs and enough heat to clear my sinuses. Served over a hot sauce-laced take on Caribbean-style peas and rice, it made for a wonderfully soppy, flavor-packed dish. The lunch plate also comes with steamed kale, green beans, and a scoop of intensely cinnamon-y house-made mango chutney — a hearty and healthful meal, tough to top among inexpensive downtown lunch options.

The other daily specials didn’t quite reach the heights of that jerk chicken, but all were characterized by the homey, comforting quality that distinguishes Edirisinche’s food. On Wednesdays, there are Caribbean-style roti wraps, a chicken version and a vegetarian version. Though the roti skin was thicker and doughier than I prefer, the chicken-and-potato curry filling was satisfying and straightforward. For Thursday’s lamb curry, the meat was cut into small cubes — gamy and flavorful, if a bit dry. On Friday there are tender, yellow-tinged tilapia fillets drenched in a mild coconut curry sauce that soaks, tastily, into a bed of basmati rice. I liked the fish well enough, although that day’s vegetarian special — a very fresh-tasting chana masala — was even better.

The vegetable sides, which vary from day to day, tend to be seasoned very plainly. (The exception, on Thursdays, is a soulful, well-spiced, remarkably juicy spinach-and-potato side that’ll convert even reluctant spinach eaters). On the whole, spice levels are conservative enough to have broad appeal, but those who want more heat can spike their food with a dash of Matouk’s, an excellent West Indian hot sauce — there are always several bottles on the counter.

Usually, Edirisinche will matter-of-factly stick your lunch in the microwave before boxing it up. The food at Anula’s is lovingly made from scratch, but the cafe is mostly a one-woman operation — though two friendly younger women I mistook for Edirisinche’s daughters (she told me they are like family) help out during the lunch rush. They’re assembling plates, not cooking to order.

Anula’s also serves what Edirisinche calls Sri Lankan patties — again, both a chicken and a vegetarian version, with a nice flaky pastry crust and a curry-inflected filling that skews slightly more toward South Asia than the Caribbean. One of these, toasted in the panini press, makes for an excellent snack while you’re waiting for the rest of your food.

Meanwhile, the American side of the menu consists of more typical fare like roast turkey sandwiches and tuna salads. But the one sandwich I tried — roasted eggplant, a garlicky basil pesto, and pepper jack cheese served on a Dutch crunch roll, the whole thing toasted on the panini press until everything inside was soft and oozy — was the best vegetarian sandwich I’d had in months. And Edirisinche’s homemade coconut-frosted banana cake — moist, dense, and slightly gooey — is not to be missed.

I like the food, but what sets the cafe apart from the backdrop of Generic Delis is a warm, inviting atmosphere that makes you feel like you’re hanging out in a beloved aunt’s kitchen. It sounds cliché, but I’m convinced that Edirisinche really is everyone’s auntie. Over the course of several visits I heard folks of all ages and ethnicities venting about job frustrations, discussing home remodeling plans, and bantering about the Eighties electro-pop that Edirisinche seems to favor. Edirisinche asks after a disproportionate number of customers’ mothers. Nearly everyone seems to be a first-name-basis kind of regular.

If you only have ten minutes to grab a quick meal to bring back to the office, why wouldn’t you want to spend that time in a place like this?